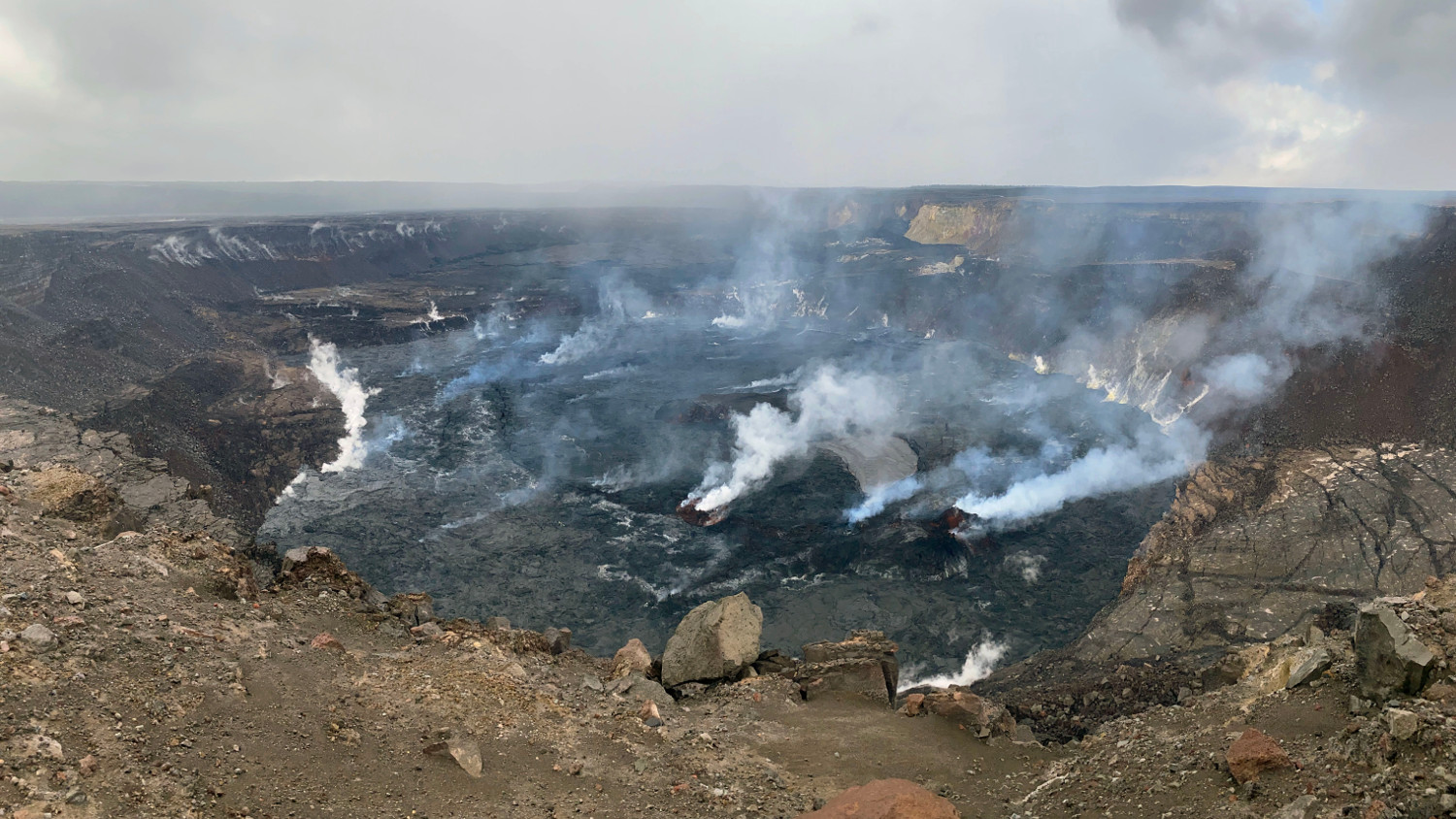 USGS: "A photo of Halema‘uma‘u crater, at Kīlauea summit, taken on July 13 from the western rim of the crater. SO2 gas emissions remain elevated and were measured at about 1250 tonnes per day on July 14. Volcanic gases, and steam from rain on the crater floor, often obscured visibility with only intermittent views of the crater floor and active lava lake." (USGS photo taken by L. DeSmither)

HAWAIʻI VOLCANOES NATIONAL PARK - Scientists with the USGS posted new photos and maps of the ongoing summit eruption at Halemaʻumaʻu. 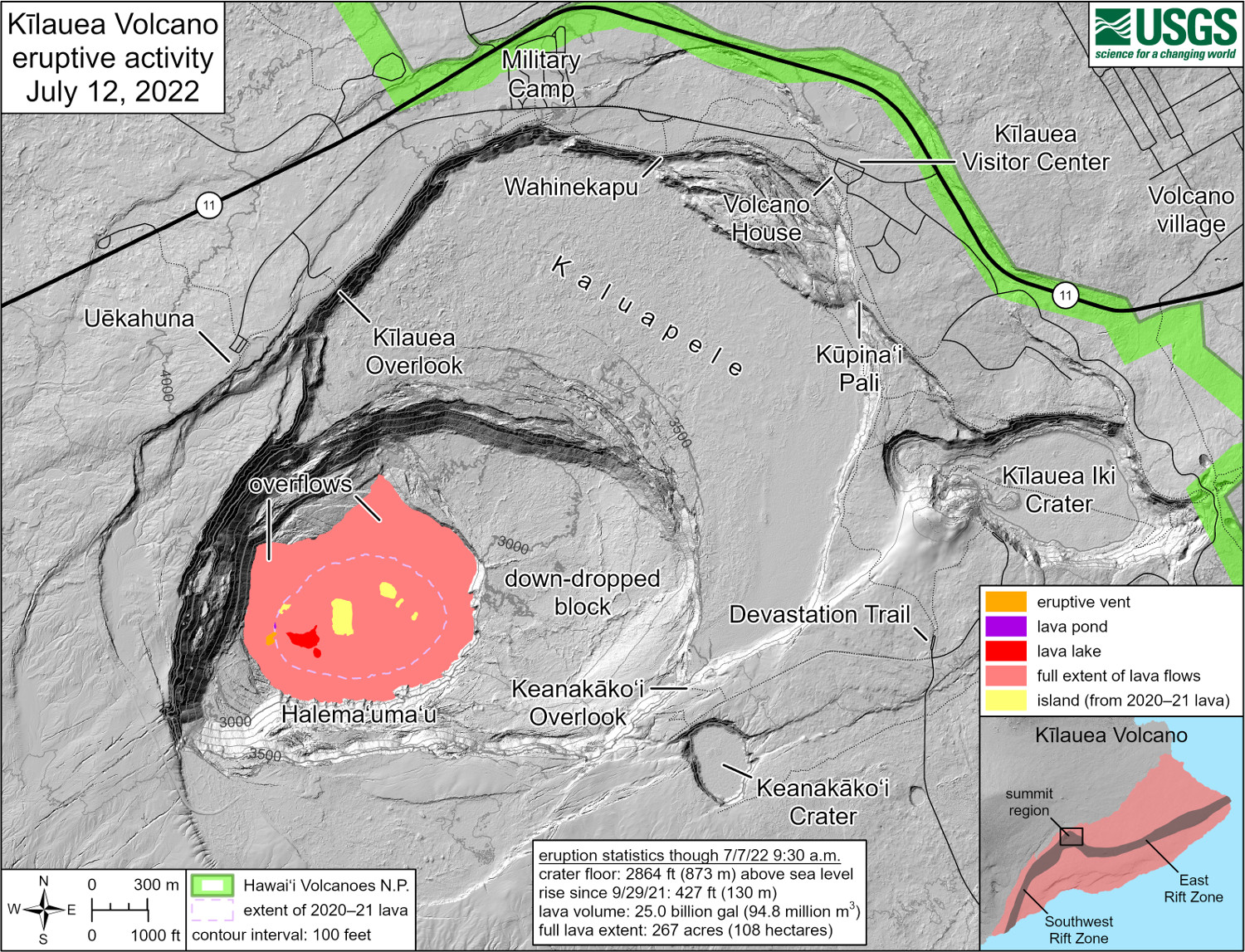 USGS: “This reference map depicts the ongoing Kīlauea summit eruption on July 12, 2022. One eruptive vent (orange) is active within Halema‘uma‘u, on the western side of the crater floor. An adjacent pond (purple) is feeding lava to a larger lake (red) via a crusted-over tube. The eruption statistics provided here are current as of the last HVO overflight on July 7, 2022.”

(BIVN) – The eruption of Kīlauea Volcano continues, with no significant changes noted at the summit or in either rift zone, scientists reported today. 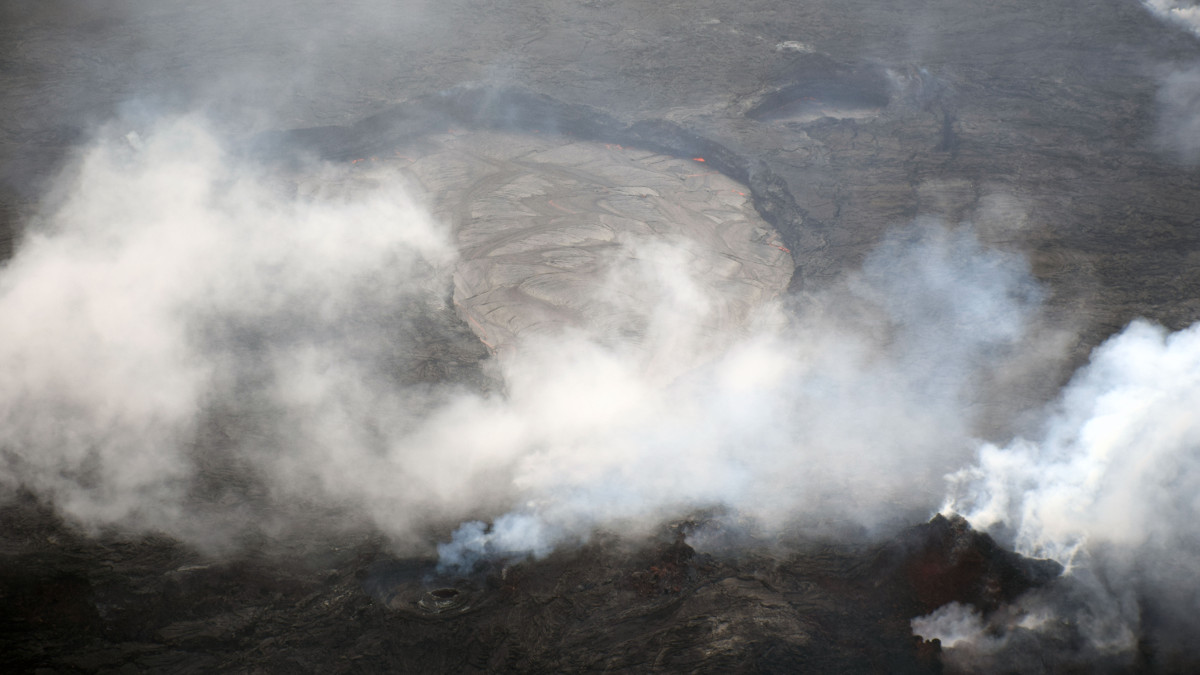 USGS: “A telephoto image of the active lava lake within Halema‘uma‘u crater, at the summit of Kīlauea, taken on July 13. During the current deflationary tilt phase of a deflation-inflation event, the active lava lake level is about 9 m (30 ft) below the lake rim. The west vent cone (lower right) is about 24 m (79 ft) tall, with a few areas that were weakly incandescent.” (USGS photo taken by L. DeSmither from the west rim of Halema‘uma‘u)

From the Friday (July 15) activity update posted by the USGS HVO, which maintains the Kīlauea alert level at WATCH/ORANGE:

Summit Observations: Eruption of lava from the Halemaʻumaʻu western vent into the active lava lake has continued over the past 24 hours. The lava level in the lake has been steady at a relatively low level following summit deflation in recent days. Overnight webcam views showed that lava ooze-outs and low-level spattering at the western vent were absent over the past 24 hours. Measurements from an overflight on July 7, 2022 indicated that the crater floor had seen a total rise of about 130 meters (427 feet) at that time, and that 95 million cubic meters (25 billion gallons) of lava had been effused since the beginning of this eruption on September 29, 2021. Summit tiltmeters have been generally flat over the past 24 hours, following a deflationary period that started in the late evening of July 9. A sulfur dioxide (SO2) emission rate of approximately 1,300 tonnes per day (t/d) was measured on July 11, 2022. Summit tremor is steady for this eruption’s long term base-line level.

Rift Zone Observations: No unusual activity has been noted along the East Rift Zone or Southwest Rift Zone; steady rates of ground deformation and seismicity continue along both. Measurements from continuous gas monitoring stations downwind of Puʻuʻōʻō in the middle East Rift Zone remain below detection limits for SO2, indicating that SO2 emissions from Puʻuʻōʻō are negligible. 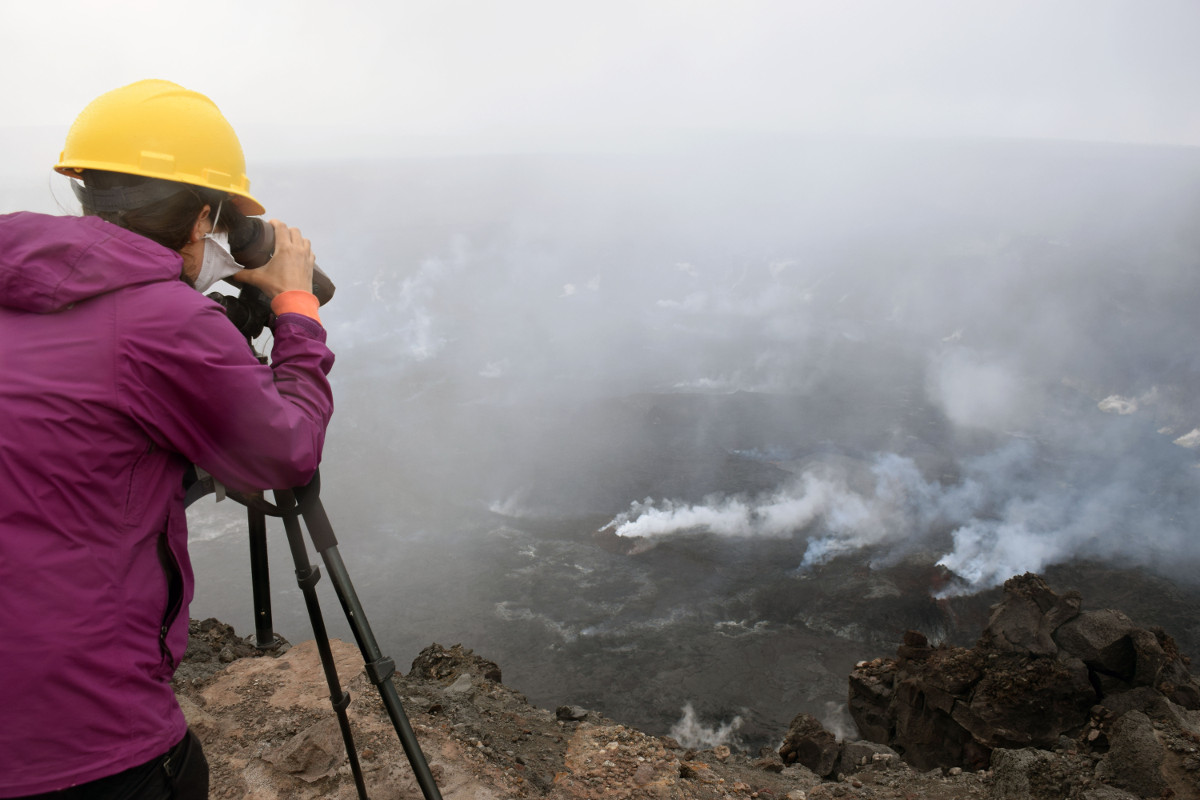 USGS: “A Hawaiian Volcano Observatory scientist uses a laser rangefinder to measure the distance to different areas of interest around the crater. These measurements help us to track changes in the lava lake and crater floor, and to measure features such as the lava lake and west vent cone.” (USGS photo taken by L. DeSmither on July 13, 2022)

According to the USGS, lava is presently visible from three public visitor overlooks in Hawai‘i Volcanoes National Park: “Keanakāko‘i Overlook and Kūpina‘i Pali (Waldron Ledge) can see the eruptive vent and lava lake, while Kīlauea Overlook can occasionally see lava ooze-outs in the southeast part of the crater,” the Hawaiian Volcano Observatory says.