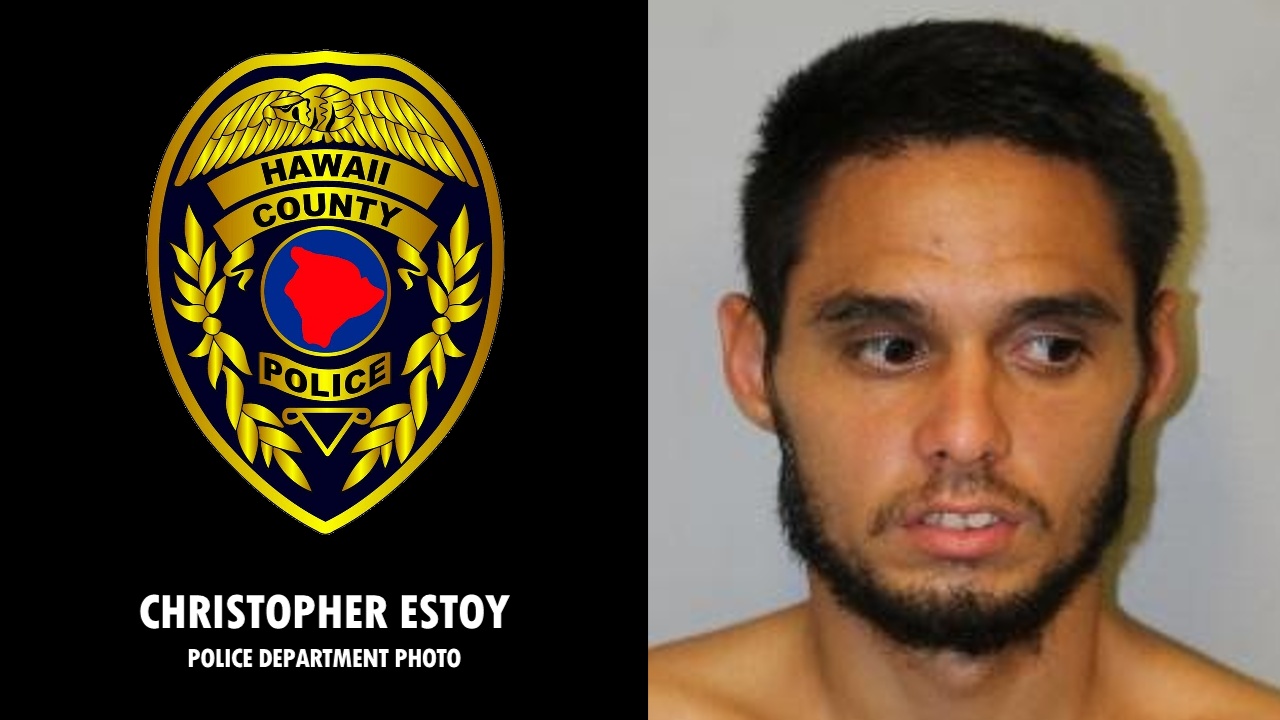 HILO, Hawaiʻi - 29-year-old Christopher Estoy has been charged in relation to two, separate incidents on either side of Hawaiʻi island, both of which occurred in the month of August.

This news release from the Hawaiʻi Police Department focused on the incident in Hōnaunau:

Hawai‘i Island police are investigating an incident involving a weapon that occurred at a school in Hōnaunau on Wednesday, August 24, 2022.

When Kona patrol officers responded to the reported incident at the school, they determined that 29-year-old Christopher Estoy, of Kailua-Kona, had entered the school campus and followed a student into a student restroom. Estoy, who was in possession of a weapon, closed the restroom door, restricting the juvenile from exiting the restroom. Shortly after, an adult who was in the immediate area heard a commotion and was able to open the restroom door at which time the juvenile was able to escape.

Estoy was arrested for unlawful imprisonment and remained in custody at the Kealakehe Police Station as detectives with the Area II Juvenile Aid Section continued this investigation.

On the afternoon of Friday, August 26, after conferral with the County Prosecutors Office, Estoy was charged with one count each of kidnapping, custodial interference, terroristic threatening in the first degree, and unlawful imprisonment in the second degree. In addition, Estoy was arrested and charged for unrelated offenses related to burglary and revocation of supervised release. His total bail is set at $125,000 and he remains in custody at the Kealakehe Police Station, pending his initial court appearance at the Kona District Court on Monday morning, August 29.

Anyone with information about this incident is asked to contact Detective Kevin Brodie via email at Kevin.Brodie@hawaiicounty.gov or at (808) 326-4646 ext. 304.

Prosecuting Attorney Kelden Waltjen announced that a Kona man, 29 year-old Christopher Estoy, was charged with kidnapping, custodial interference, unlawful imprisonment, and terroristic threatening in relation to an August 24, 2022 incident involving a minor at Honaunau Elementary School and a separate burglary which occurred at the Dolphin Bay Hotel in Hilo on August 8, 2022. At the time of his arrest for these incidents, he was also arrested for an outstanding Circuit Court bench warrant.

As the Complaints allege, Estoy, who has a prior felony Kidnapping conviction, was charged with Kidnapping, Custodial Interference in the First Degree (took, enticed, concealed, or detained a minor less than eleven years old, from the minor’s lawful custodian, knowing that he had no right to do so), Unlawful Imprisonment in the Second Degree (knowingly restrained another person), Terroristic Threatening in the First Degree (with use of a dangerous instrument, a knife), and Burglary in the First Degree. The most serious offense, Kidnapping, is a class A felony, punishable by a twenty (20) year prison term. If convicted as charged of the Kidnapping, Terroristic Threatening, or the Burglary offenses, Estoy faces sentencing to a mandatory prison term and will not be eligible for probation.

Estoy is scheduled to make his initial appearance on Monday morning in Kona District Court. Estoy remains in custody in lieu of $125,000.00 total bail on all matters.