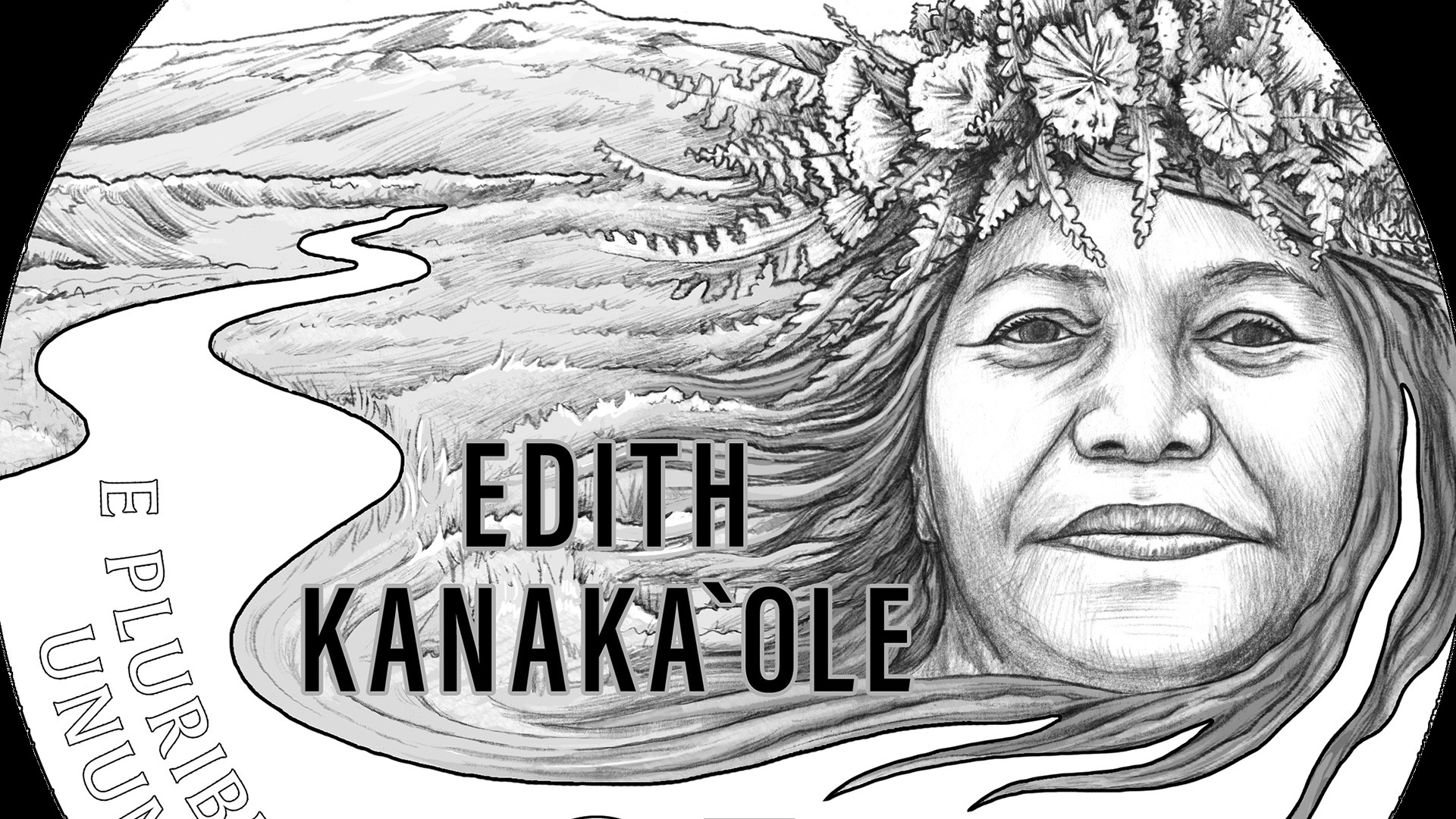 Rendering of the Edith Kanakaʻole Commemorative Quarter design. This is a partial view, the full view can be found below.

HAWAIʻI - The design for the Edith Kanakaʻole Quarter, the seventh coin in the American Women Quarters Program, has been released. 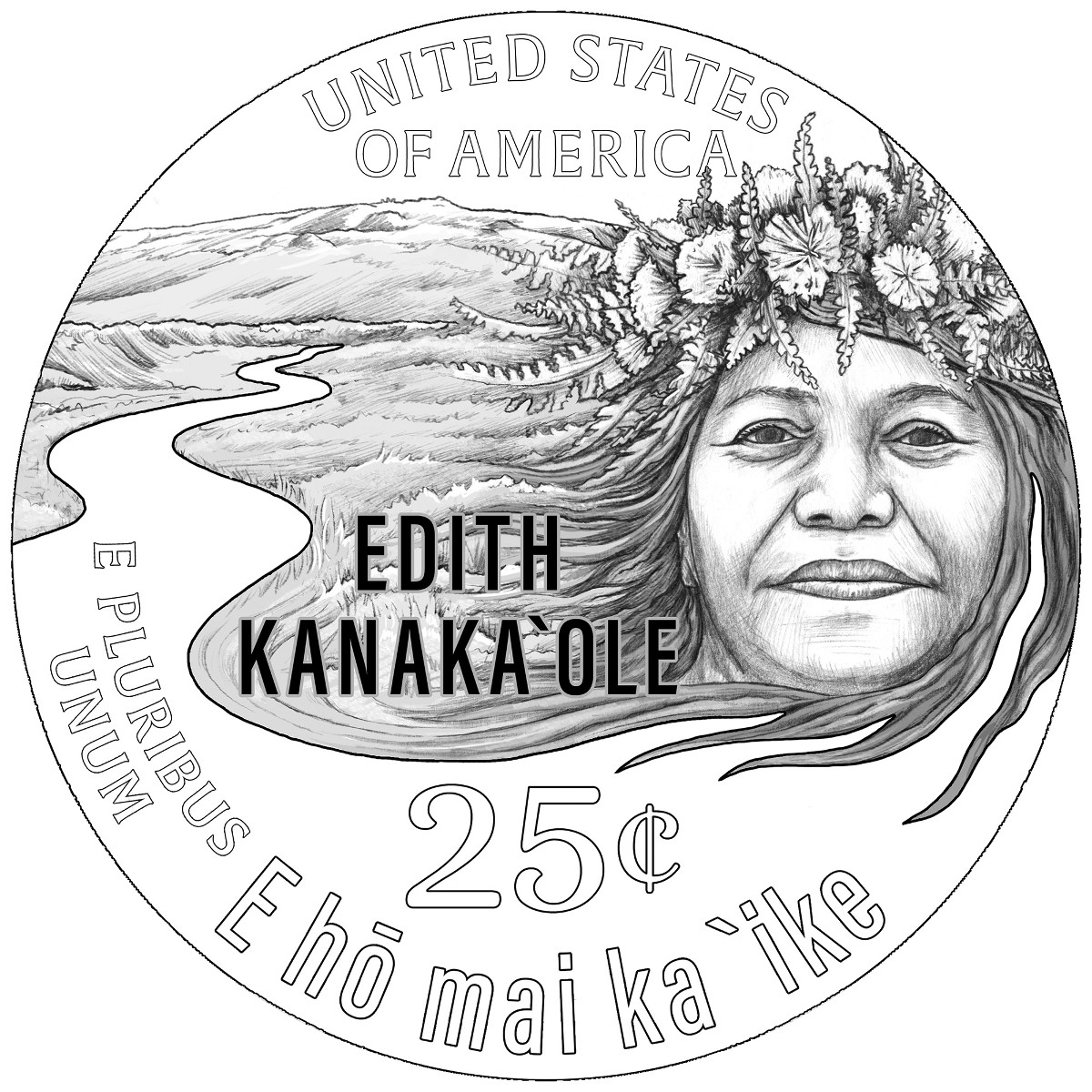 From Office of Hawaiian Affairs Board Chair Carmen “Hulu” Lindsey:

The late Edith Kanaka’ole stood as symbol of the Hawaiian renaissance of the 1970s, helping to preserve and then educate the world on our culture, language, practices, and history. A legendary kumu hula, chanter, historian, and educator, Edith Kanakaʻole is now the first Native Hawaiian woman to be featured as a part of the 2023 American Women Quarters Program. There is no one more deserving of this honor, and we mahalo the U.S. Mint for recognizing the many contributions she made to her people, her state, the nation, and the world. It is so appropriate that her famous chant “E hō mai ka ʻike, Grant us knowledge” is inscribed on the coin, marking her legacy which continues today through the outstanding work of the Edith Kanakaʻole Foundation. I have been personally touched by the legacy of this great Hawaiian woman, as I was raised with Aunty Edith in Keaukaha – she was my Sunday school teacher in the Church of Jesus Christ of Latter-day Saints, Keaukaha branch, where her husband Luka Kanaka’ole served as our branch president. Although she passed in 1990, Edith Kanakaʻoleʻs voice still resonates today, as we are reminded of her lessons to her students when she became an instructor at UH-Hilo – maintain your studies and earn your degree; know who you are as Hawaiians; and always elevate the status of the lāhui. Let us all continue her work to Hoʻoulu Lāhui Aloha, to raise a beloved lāhui. Four other women trailblazers will be honored by the 2023 American Women Quarters program; former First Lady and first chair of the U.N. Commission on Human Rights Eleanor Roosevelt; first African American and first Native American woman pilot Bessie Coleman; Mexican American journalist Jovita Idar; and Maria Tallchief, a Native American and Americaʻs first major prima ballerina.

“Edith Kanakaʻole was a prominent leader in the revitalization of Hawaiian language and culture – notably as a renowned kumu hula,” said U.S. Senator Mazie Hirono (D-HI), who previously urged the Mint to include Kanakaʻole as one of the women highlighted. “She helped preserve and spread Hawaiian language, traditions, and history, contributing so much to the Native Hawaiian community, Hawaii, and our nation. It is fitting that she be honored with this special recognition. I’m pleased to see the design for her commemorative quarter today, and I look forward to seeing these quarters put into circulation, so that people in every corner of our country can learn more about Edith Kanakaʻole and her remarkable life.”

On its website, the U.S. Mint provides this background:

The Edith Kanakaʻole Quarter is the seventh coin in the American Women Quarters™ Program. Edith Kanakaʻole was an indigenous Hawaiian composer, chanter, Kuma Hula, and a custodian of native culture, traditions, and the natural land. Her moʻolelo, or stories, served to rescue aspects of Hawaiian history, customs, and traditions that were disappearing due to the cultural bigotry of the time.

Kanakaʻole, or “Aunty Edith”, as she is commonly known, was a renowned practitioner of and authority on modern Hawaiian culture and language. She learned hula from her mother, who was instructed by the acclaimed dancer Akoni Mika.

Kanakaʻole believed that the oli, or Hawaiian chants, formed the basis of Hawaiian values and history. She started composing oli in 1946 and choreographed hula to go with many of her chants.

In the 1950s, she toured the contiguous United States, western Canada, and much of Asia with a hula group named after her daughter Nalani. She also founded her own hālau (hula school), Halau O Kekuhi.

Kanakaʻole assisted in the development of the first Hawaiian language program for public school students at the Keaukaha School in Hilo. In the 1970s, she created college courses and seminars on subjects including ethnobotany, Polynesian history, genealogy, and Hawaiian chant and mythology.

In 1979, she received the Distinction of Cultural Leadership award, the state’s highest honor. It is given to an individual who has made significant outstanding lifetime contributions to Hawai’i in areas of culture, arts, and humanities.

Edith Kanakaʻole died on October 3, 1979. Her teachings, beliefs, and practices are maintained by the Edith Kanakaʻole Foundation (EKF), a Hawaiian cultural-based non-profit 501(c)(3) organization established in 1990.

According to a news release issued by Sen. Hirono:

Authorized by the Circulating Collectible Coin Redesign Act of 2020, the American Women Quarters Program features coins with designs emblematic of the accomplishments and contributions of prominent American women. Contributions come from a wide spectrum of fields including, but not limited to, suffrage, civil rights, abolition, government, humanities, science, space, and the arts. The women honored come from ethnically, racially, and geographically diverse backgrounds. As required by the law, no living person will be featured in the coin designs, and thus all the women honored must be deceased. The Mint is issuing five coins with different reverse designs annually over the four-year period from 2022 through 2025.