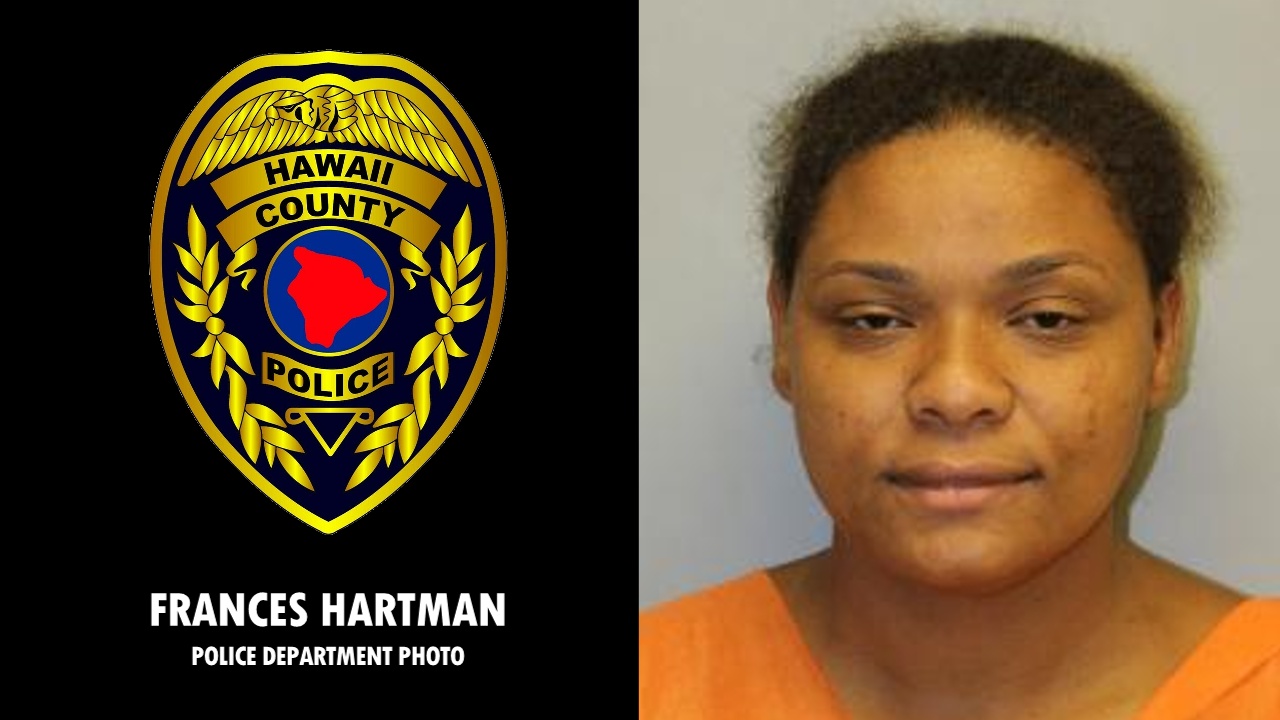 HILO, Hawaiʻi - A 77-year-old man was reportedly struck with a knife to his abdomen by his estranged daughter-in-law.

The charges against Hartman stem from an incident that occurred shortly before 9:00 a.m. on Wednesday, when South Hilo Patrol officers responded to a domestic call at a residence on Apono Street in Hilo. Responding officers contacted a 77-year-old man who reported that he had been stabbed by his estranged daughter-in-law, Hartman, and that she had taken his one-year-old granddaughter, in violation of a court order.

Hartman left the scene with the child prior to police arrival; however, she was located several minutes later at a nearby private neighborhood park on Komomala Drive. Hartman was arrested without further incident. The child was returned unharmed to the custody of her father, who is the legal custodial parent.

The victim was observed with an open stab-type wound to his abdomen area. He was transported via ambulance to the Hilo Medical Center, and immediately taken to the operating room for surgery. He remains hospitalized in stable condition.

On Thursday evening, September 1, 2022, after conferring with County Prosecutors, detectives from the Area I Juvenile Aid Section charged Hartman with: Second-degree attempted murder, First-degree custodial interference, Second-degree terroristic threatening, (and) Violation of an order for protection

Her bail was set at $1,020,000.00. Hartman remains in police custody pending her initial court appearance scheduled for today, September 2, in Hilo District Court.

The Office of the Hawaiʻi County Prosecuting Attorney, Kelden B.A. Waltjen, provided this information on the charges:

As the Complaint alleges, Hartman was charged with Attempted Murder in the Second Degree (intentionally engaged in conduct, the use of a bladed instrument or knife to slice, cut, tear, and/or lacerate the abdomen area of another person, which, under the circumstances as she believed them to be, constituted a substantial step in the course of conduct intended or known to cause the death of another person), Custodial Interference in the First Degree (took, enticed, concealed or detained a minor less than eleven years old, from that minor’s lawful custodian, knowing that she had no right to do so), Violation of an Order for Protection, and Terroristic Threatening in the Second Degree. Prosecutors have provided notice to seek an extended term of imprisonment, alleging that Hartman is an offender against the elderly. Attempted Murder in the Second Degree usually carries a penalty of life in prison with the possibility of parole. An extended prison term would mean that Hartman would face life in prison without the possibility of parole. Prosecutors have also provided notice of an intention to seek a mandatory prison term in accordance with statutory sentencing guidelines in relation to imprisonment for offenses against the elderly.

The prosecuting attorney added that “the charges are merely allegations, and the Defendant is presumed innocent unless and until proven guilty.”