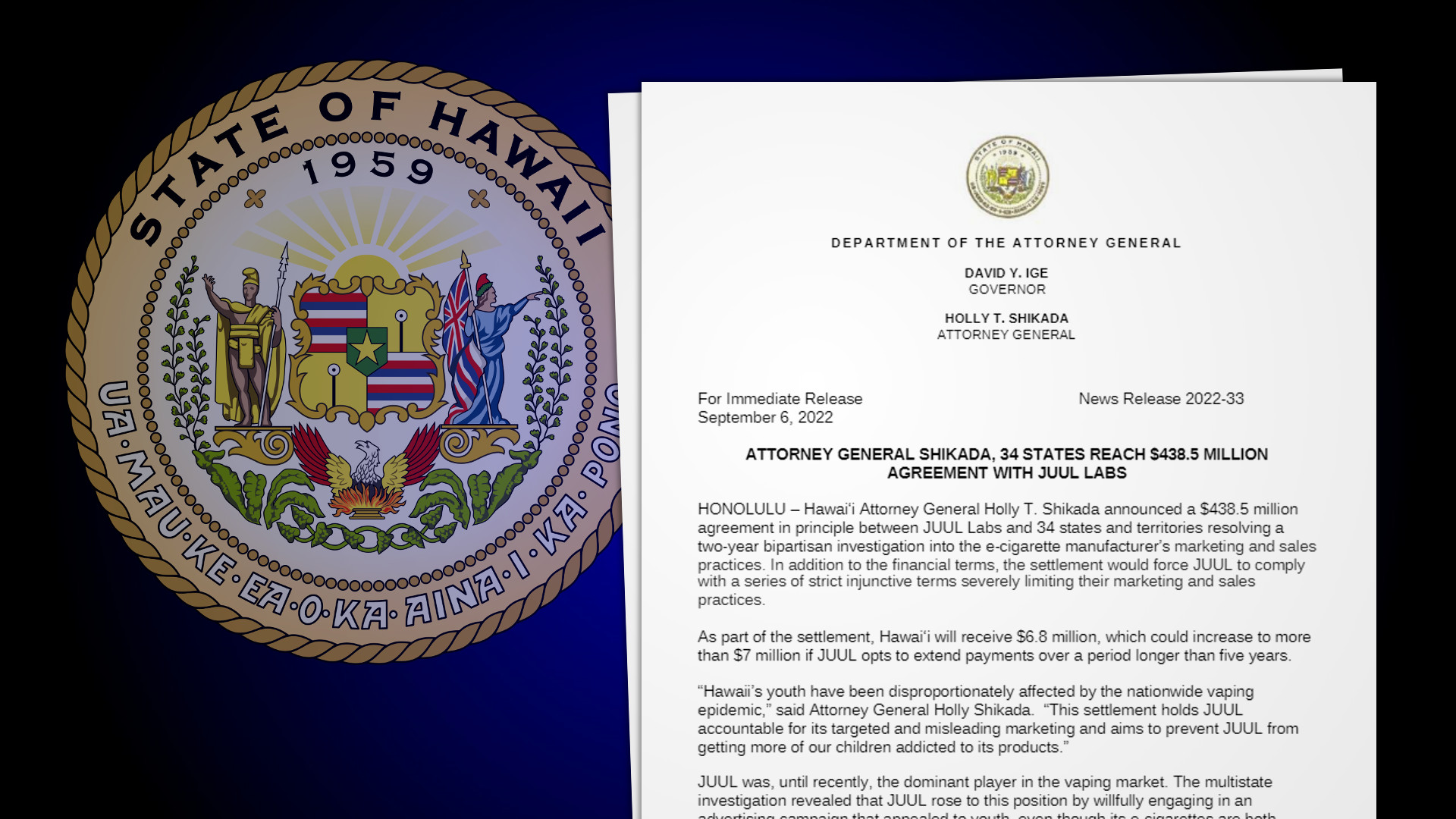 HAWAIʻI ISLAND - The payment is part of a $438.5 million settlement with 34 states that would also limit the e-cigarette manufacturer’s marketing and sales practices.

From the Hawaiʻi Department of the Attorney General:

Hawai‘i Attorney General Holly T. Shikada announced a $438.5 million agreement in principle between JUUL Labs and 34 states and territories resolving a two-year bipartisan investigation into the e-cigarette manufacturer’s marketing and sales practices. In addition to the financial terms, the settlement would force JUUL to comply with a series of strict injunctive terms severely limiting their marketing and sales practices.

As part of the settlement, Hawai‘i will receive $6.8 million, which could increase to more than $7 million if JUUL opts to extend payments over a period longer than five years.

“Hawaii’s youth have been disproportionately affected by the nationwide vaping epidemic,” said Attorney General Holly Shikada. “This settlement holds JUUL accountable for its targeted and misleading marketing and aims to prevent JUUL from getting more of our children addicted to its products.”

JUUL was, until recently, the dominant player in the vaping market. The multistate investigation revealed that JUUL rose to this position by willfully engaging in an advertising campaign that appealed to youth, even though its e-cigarettes are both illegal for them to purchase and are unhealthy for youth to use. The investigation found that JUUL relentlessly marketed to underage users with launch parties, advertisements using young and trendy-looking models, social media posts and free samples. It marketed a technology-focused, sleek design that could be easily concealed and sold its product in flavors known to be attractive to underage users. JUUL also manipulated the chemical composition of its product to make the vapor less harsh on the throats of the young and inexperienced users. To preserve its young customer base, JUUL relied on age verification techniques that it knew were ineffective.

The investigation further revealed that JUUL’s original packaging was misleading in that it did not clearly disclose that it contained nicotine and implied that it contained a lower concentration of nicotine than it actually did. Consumers were also misled to believe that consuming one JUUL pod was the equivalent of smoking one pack of combustible cigarettes. The company also misrepresented that its product was a smoking cessation device without FDA approval to make such claims.

Nicotine addiction among Hawai‘i children, caused by the rise of e-cigarettes, is alarmingly high—2017 data from the Centers for Disease Control and Prevention shows that Hawai‘i has the highest vaping rate among middle schoolers and the second highest among high schoolers in the nation.

Once fully executed, the settlement will resolve the lawsuit filed by the Hawai‘i Department of the Attorney General against JUUL in 2020. Hawaii’s lawsuit alleged that JUUL used marketing strategies that targeted teenagers, making JUUL products seem desirable, all while falsely understating the nicotine content of the product and its addictiveness. However, Hawaii’s claims against Altria Group, Inc. (the parent company of Philip Morris and JUUL’s largest shareholder) is not affected by the settlement and remains active.

The State is represented in the lawsuit by the Honolulu law firm Starn O’Toole Marcus & Fisher, and the national law firm Lieff Cabraser Heimann & Bernstein, LLP.

As part of the settlement, JUUL has agreed to refrain from:

• Youth marketing
• Funding education programs
• Depicting persons under age 35 in any marketing
• Use of cartoons
• Paid product placement
• Sale of brand name merchandise
• Sale of flavors not approved by FDA
• Allowing access to websites without age verification on landing page
• Representations about nicotine not approved by FDA
• Misleading representations about nicotine content
• Sponsorships/naming rights
• Advertising in outlets unless 85 percent audience is adult
• Advertising on billboards
• Public transportation advertising
• Social media advertising (other than testimonials by individuals over the age of 35, with no health claims)
• Use of paid influencers
• Direct-to-consumer ads unless age-verified, and
• Free samples.

The agreement also includes sales and distribution restrictions, including where the product may be displayed/accessed in stores, online sales limits, retail sales limits, age verification on all sales, and a retail compliance check protocol.