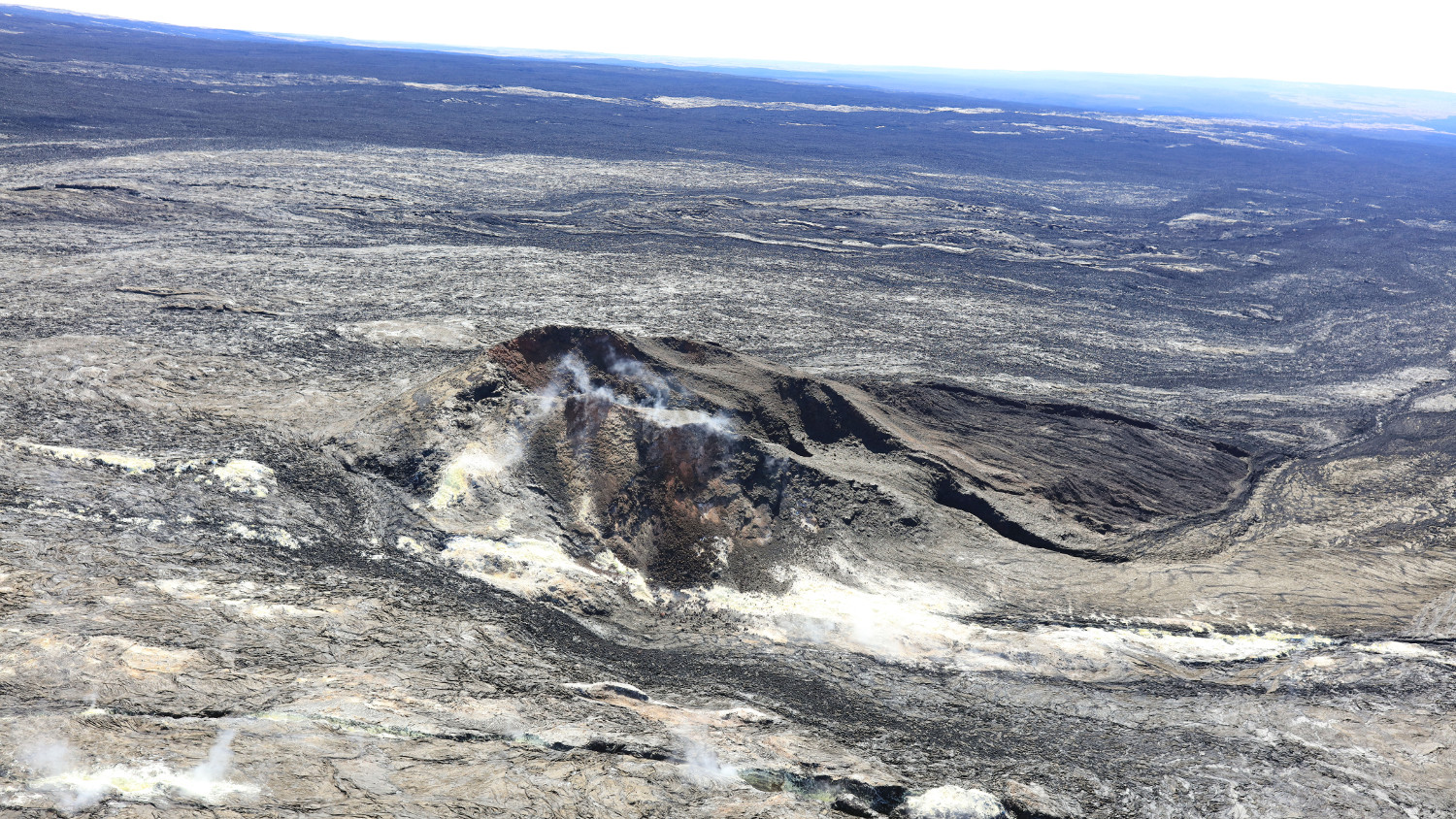 USGS: "On October 28, 2022, HVO geologists conducted an overflight of Mauna Loa’s summit region. This photo of Sulfur Cone, on the Southwest Rift Zone, is at an elevation of 3,430 meters (11,240 feet) above sea level. The 1950 fissure is visible in the foreground of the image." (USGS image by K. Mulliken)

HAWAIʻI ISLAND - This week's article features the use of InSAR, or Interferometric Synthetic Aperture Radar, to measure deformation of Hawaiʻi volcanoes. 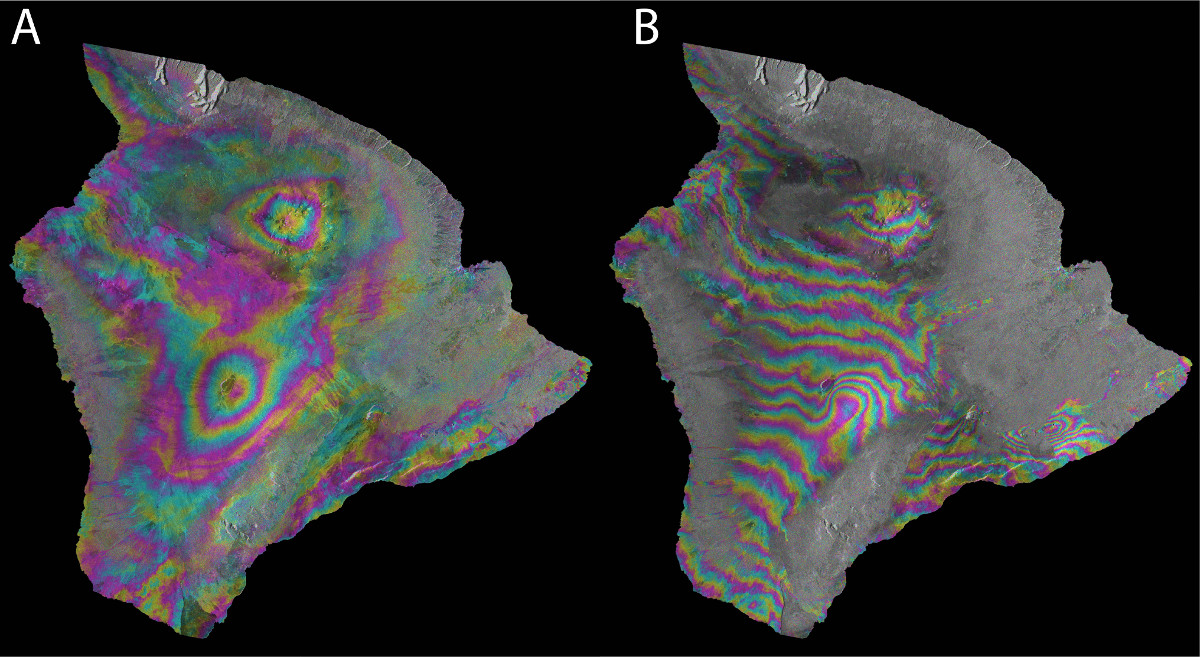 USGS: “Noisy” InSAR interferogram examples covering the Island of Hawaiʻi. (A) shows data that spans 12 days. This InSAR image show similar concentric ring patterns over both Mauna Loa and Mauna Kea. At first glance this might indicate deformation at both volcanos to the untrained eye, but the most likely reason for these colorful concentric ring patterns is atmospheric noise. (B) is another example of an InSAR interferogram with heavy atmospheric noise; this one has a 30-day difference from each SAR image. Some slight (less than a fraction of an inch/mm range) deformation on Mauna Loa and the Southeast Rift Zone of Kīlauea is visible in these images, yet still hard to discern from the atmospheric noise. Notice that the lower forested slopes of the island are blank. This is because heavy tree cover also causes errors in the interferograms. (USGS images by Megan McLay, 9/7/2022)

(BIVN) – As the eruption of Kilauea continues at the summit, and with Mauna Loa showing signs of heightened unrest, scientists are using all the tools at their disposal to constantly measure the deformation of the active volcanoes.

Satellites have become one of the fundamental tools used to monitor active volcanoes. They allow us to monitor volcanoes that are otherwise hard to access and provide perspectives that are not possible to get from the ground. Satellites orbiting the Earth can provide normal “pictures” of a place, but can also provide thermal images, measure amounts and types of gases, changes in gravity, and topography.

It takes two sets of waves of the same area to measure change over time. If there has been no change to the volcano for the time between images, the signals will travel the distance in the same amount of time. However, if the volcano has changed by either inflating (uplift) or deflating (sinking), the volcano will be closer or further away in the second image. It will take more time for the radar wave to travel the distance from satellite to the ground, then back to the satellite.

If the difference between two offset waves are assigned a color based on the size of the offset, they produce a unique set of banded colors that represent the number of wavelengths separating the two images. This process produces images called interferograms. Concentric rings of color relate to the amount of surface inflation or deflation of a volcano.

While InSAR is useful for monitoring volcanic motions, it is not without problems. The nature of how InSAR images are gathered from a radar satellite often unintentionally captures signals associated with the changes in the Earth’s atmosphere between satellite passes in addition to ground surface change. This additional “atmospheric noise” is especially apparent with changes in topography. At active volcanoes that are very tall, like Mauna Loa, the sloping flanks can magnify atmospheric signals, falsely suggesting that significant change has occurred.

InSAR scientists are trained to find hints that indicate atmospheric noise has dominated the signal. One method is visually comparing other nearby landscape features with similar topography. For example, comparing InSAR data patterns on Mauna Loa to Mauna Kea has been known to help identify and distinguish between noisy weather signals from true volcanic deformation.

At first glance, the left image above (A) could seem to show both Mauna Kea and Mauna Loa inflating at the same rate simultaneously. However, we know from our Global Positioning System (GPS) instruments that Mauna Kea shows no evidence for significant deformation, so scientists can conclude that the InSAR signals on Mauna Loa are mostly likely unreliable in this specific instance.

Likewise, GPS instruments and tiltmeters on Mauna Loa provide “ground truth” at specific points that should match the deformation shown in the interferogram. Finally, both volcanoes showing similar rates of inflation would be extremely rare, making differences in atmospheric conditions the most likely explanation.

Another method is to compare multiple InSAR images. SAR satellites capture images in both ascending (traveling northward) and descending (traveling southward) directions as they orbit the planet. By creating a second InSAR image, with the same time span, but from different SAR “look directions,” it is possible to compare two interferograms of the same event. If the deformation is real over the survey area, then both InSAR images from opposing directions would show similar rates of motion.

Hawaiian Volcano Observatory scientists are constantly using these and other tools to track the movement of magma within Hawaii’s volcanoes in order to identify the warning signs of impending eruptions.