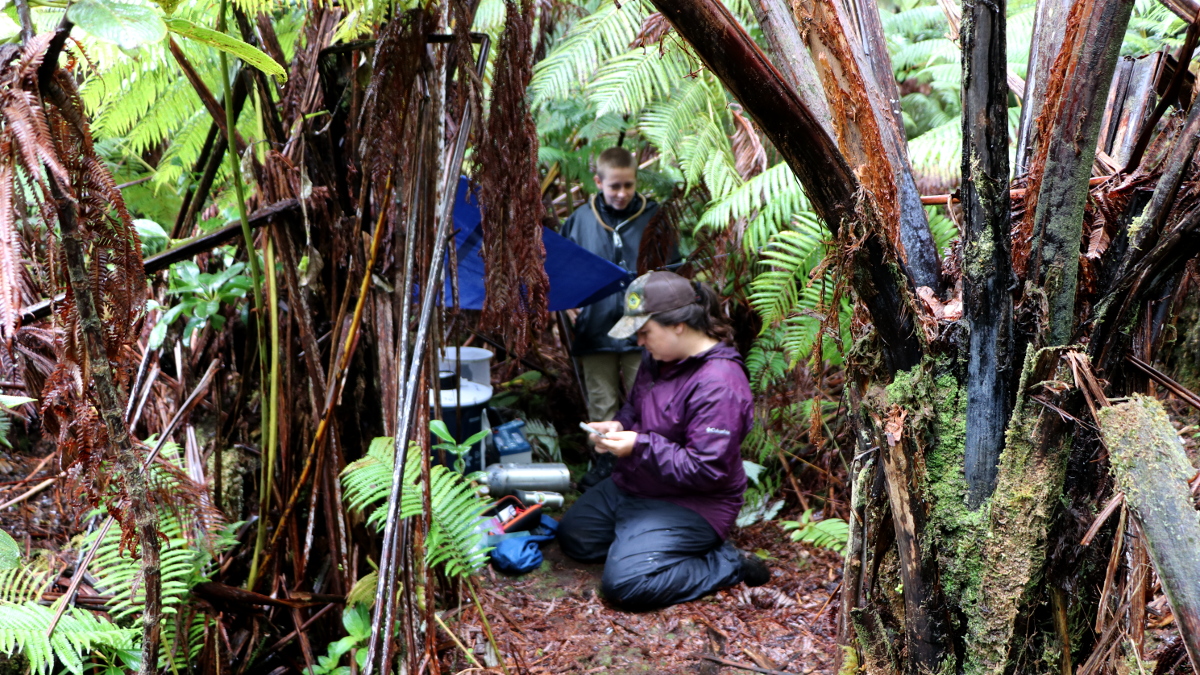 PU‘U MAKA‘ALA NATURAL AREA RESERVE - Teams are trapping mosquitoes at six Hawai‘i Island locales in a search for the presence of avian malaria. 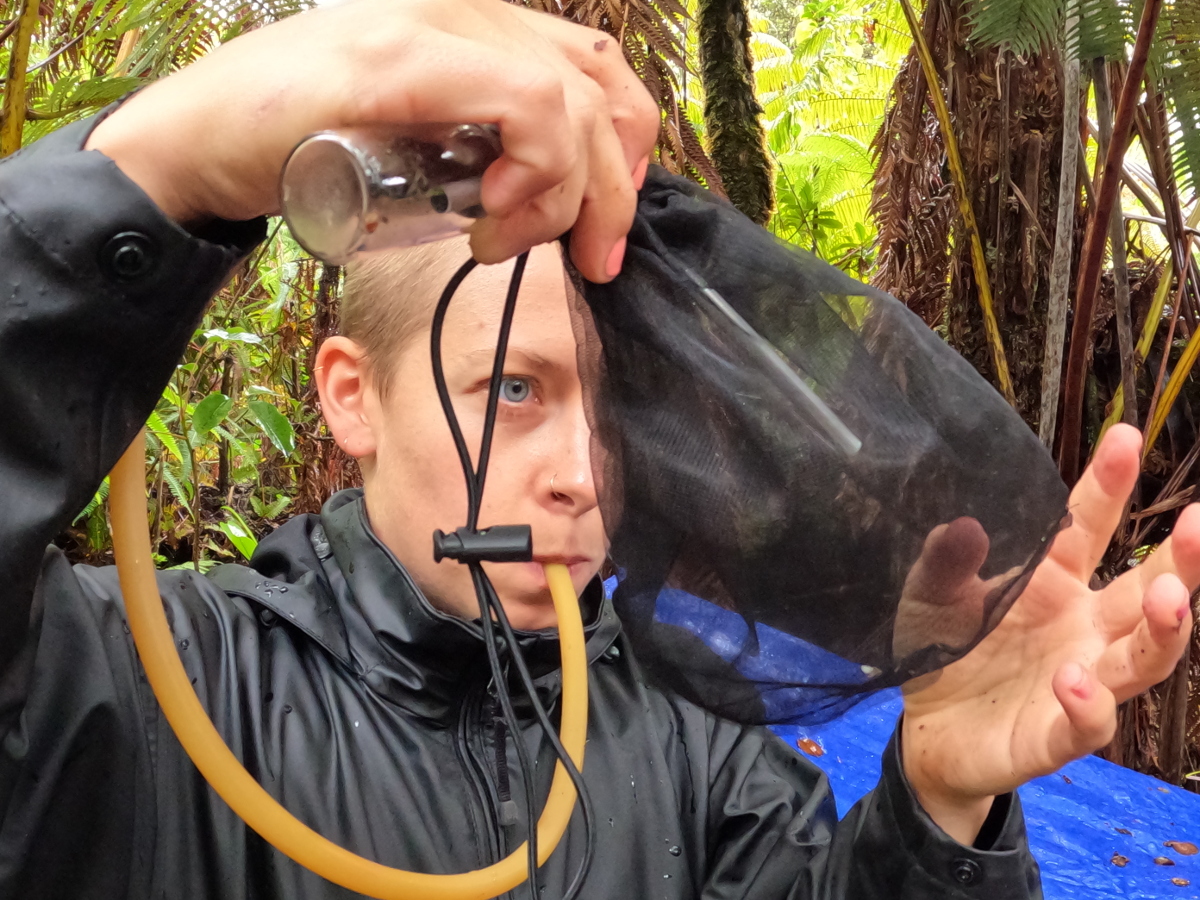 (BIVN) – In an effort to protect endangered native birds from avian malaria, a team is trapping mosquitoes at six locales on Hawai‘i Island as part of the Birds, Not Mosquitoes initiative.

A recent State of Hawaiʻi news release features a recent trip to Puʻu Makaʻala Natural Area Reserve, where they collected mosquitoes for analysis.

From the Hawaiʻi Department of Land and Natural Resources news release:

This high-elevation Natural Area Reserve is one of six locales on Hawai‘i Island where teams from the DLNR Division of Forestry and Wildlife (DOFAW) and the University of Hawai‘i Pacific Cooperative Studies Unit (PCSU) are trapping mosquitoes to detect the presence of avian malaria.

It’s the disease that is on the cusp of eliminating, forever, at least two species of native Hawaiian honeycreepers, possibly within the next two years, with several other species at risk within five years.

The population surveys will help partner organizations, involved in the Birds, Not Mosquitoes initiative, of which DLNR is a member, determine where best to begin potentially using male mosquitoes that are incompatible with wild female mosquitoes to try and knock back their ability to infect birds with the deadly disease. These field surveys will provide information about the presence of disease and would be part of the planning process for a potential mosquito control project, which would also include an environmental assessment.

On a typical rainy morning at Pu‘u Maka‘ala, Cara Thow, the DOFAW/PCSU Avian Disease Research Supervisor for Hawai‘i Island and her team of three, begin checking mosquito traps strung across the moist and mossy forest floor. 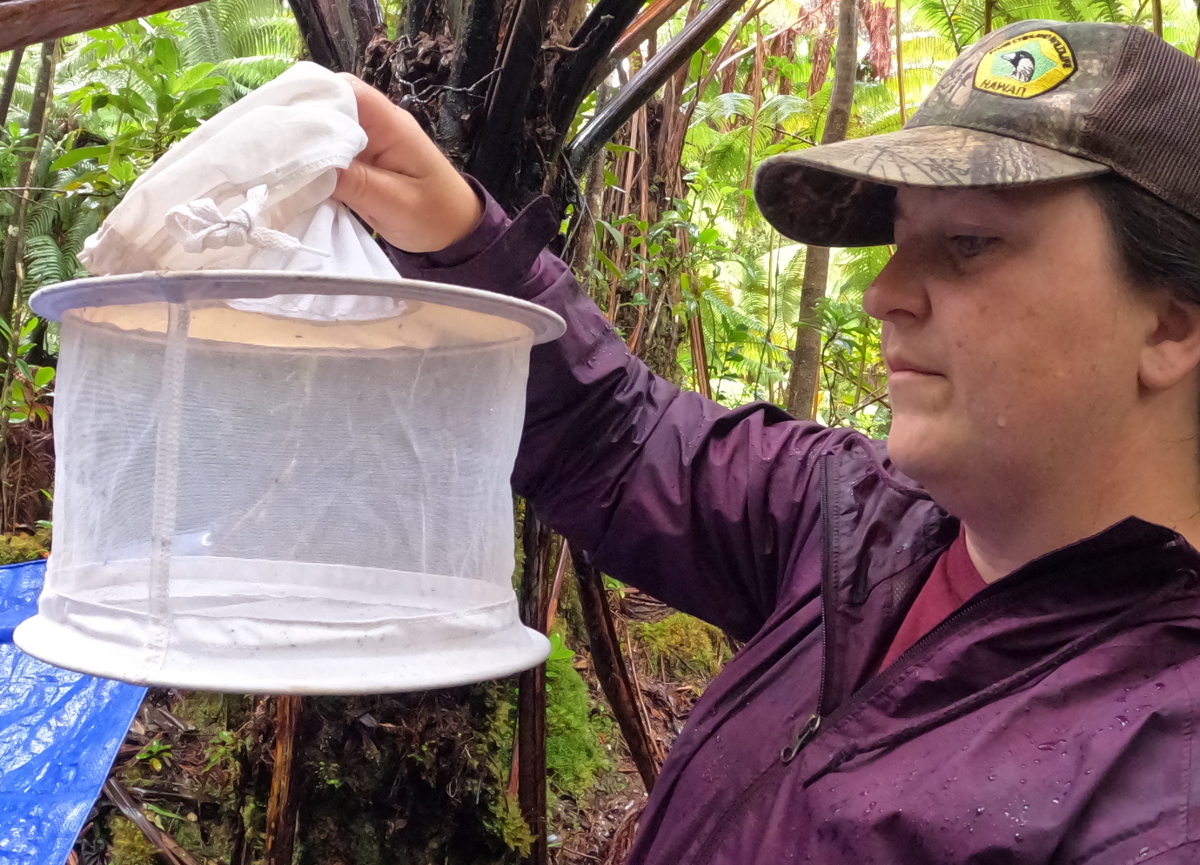 “We are only interested in female southern house mosquitos, because they are the big bad guys in terms of the avian malaria story,” Thow explained. “Once a female bites a susceptible bird, it has a 90% chance of dying.”

This species of mosquito, like all others in Hawai‘i, are not native and came in on ship bilges or water stores in the early 1800s. Hawaiian honeycreepers evolved in the absence of mosquito-borne diseases such as avian malaria and have little to no natural immunity. Now the field studies have begun for potential future projects to reduce their numbers in forests on Hawai‘i Island, Maui, and Kaua’i where avian malaria is prevalent. Due to climate-change-induced warming, mosquitoes have moved higher and higher into native bird habitats, the reason for trapping occurring at locations between 4000 and 6000 feet in elevation.

The collection teams use two types of traps. One is baited with carbon dioxide and is designed to bring in female mosquitoes seeking a blood meal. The second, known as a gravid trap, attracts the insects with a small container of stagnant, stinky water. Both traps ultimately catch mosquitoes in nets.

“The gravid traps are a little tricky because there is so much space for mosquitoes to move around,” Thow said. So, using plastic tubing and pipes, survey team members vacuum (aspirate) the insects out of the nets, where they are then placed into a small vial of ethanol for preservation. 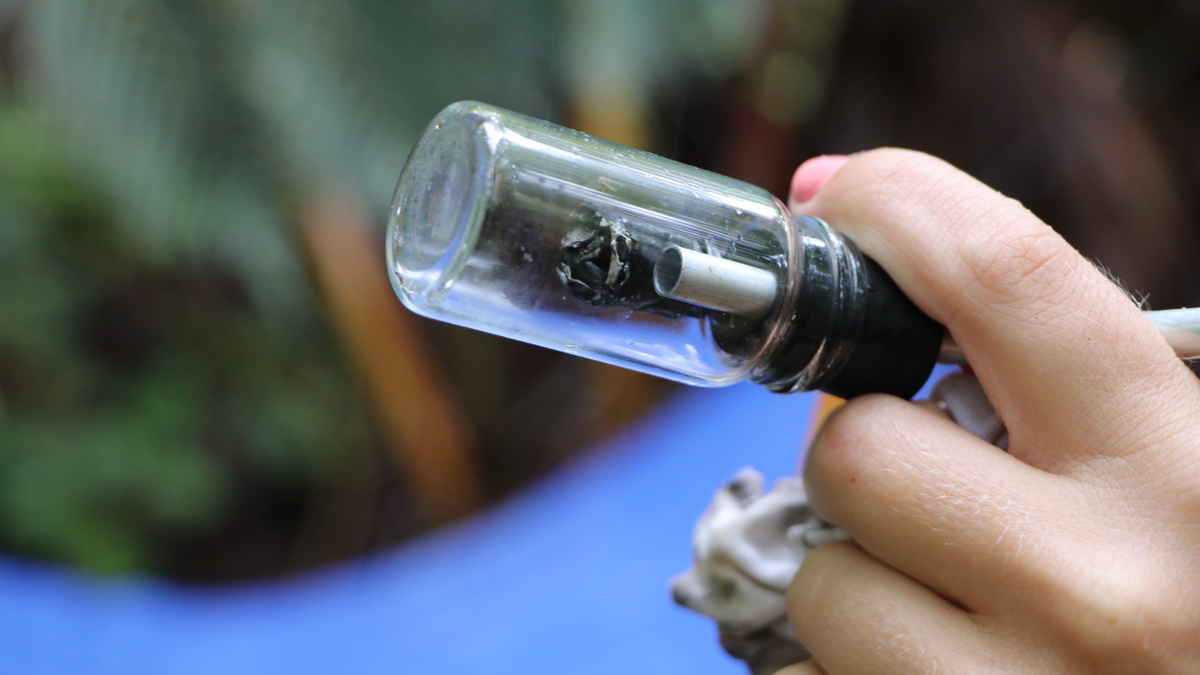 The collected mosquitoes are then sent to one of two labs: Northern Arizona University or a U.S. Geological Service (USGS) lab in Honolulu, where further work will be conducted to detect the presence of malaria.

On non-collection days, the field team bands birds and conducts blood tests on them to expand the available data to help inform management decisions about where to release the incompatible males after all permitting and regulatory approvals.

Thow added, “The truth is, mosquitoes are not native to Hawaii, and they have no role in the environment that cannot be filled by other insects and so there’s no downside to eliminating them. What’s being proposed (introduction of males that are incompatible with wild females) will not eliminate them entirely, but hopefully knock back populations enough to give these critically endangered native birds some breathing room.”

No lab results are available yet. Over 200 mosquitoes have been sent to laboratories for testing since collections began last November. The majority have come from the Pu‘u Maka‘ala Natural Area Reserve, which is at the 4,000-foot elevation level.

“The entire team (Kupu members, and RCUH/PSCSU contract employees) is absolutely proud to be part of this work,” Thow added. “It’s an honor to work toward solutions that will mean these birds persevere and that our children and grandchildren can enjoy them into the future. It’s really meaningful to be part of it.”