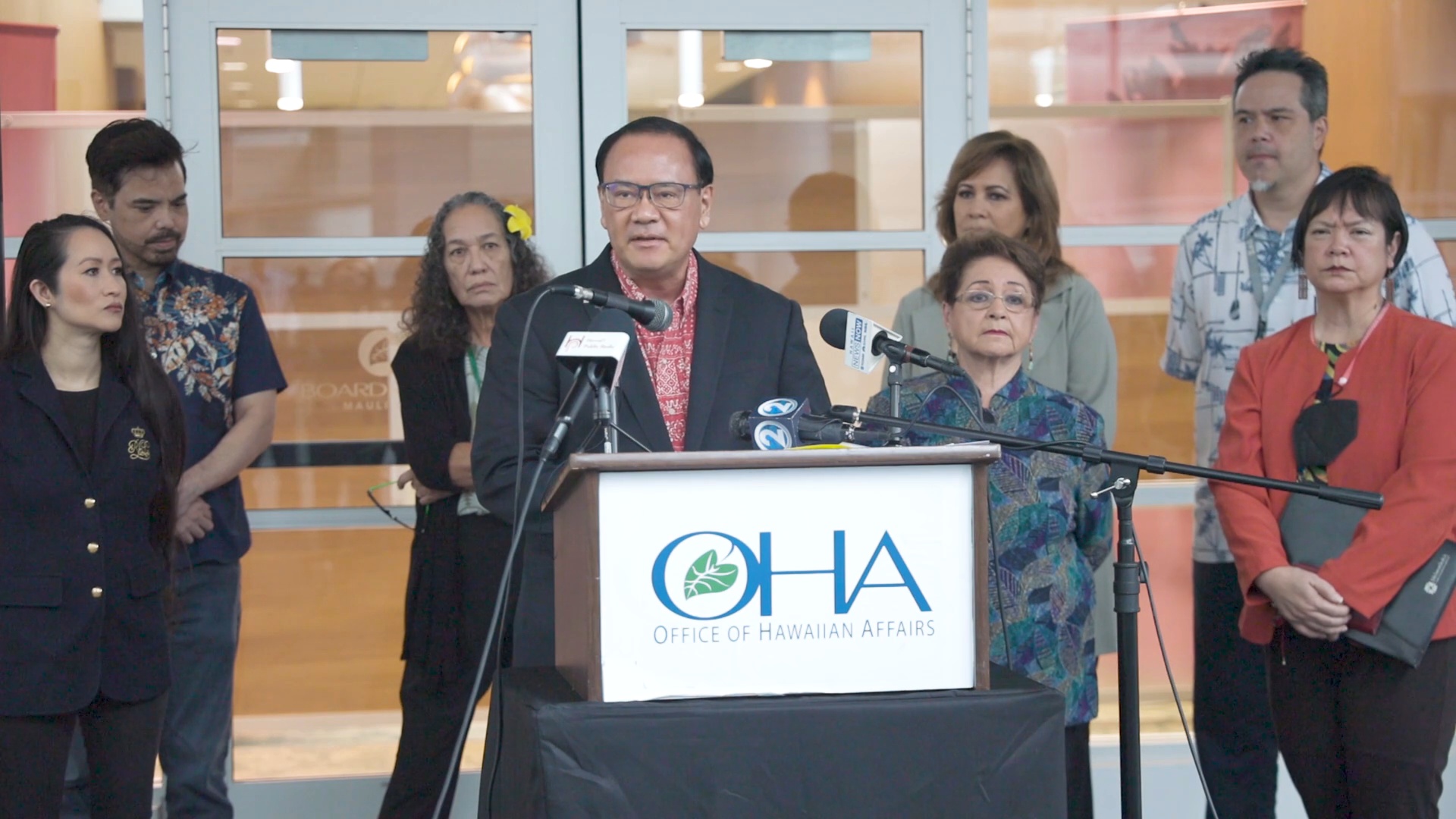 HONOLULU - The Office of Hawaiian Affairs held a news conference Thursday to address the findings of a new report examining questionable expenditures.

(BIVN) – Fraud, waste, and/or abuse occurred in 22 of 38 flagged Office of Hawaiian Affairs transactions totaling about $7.35 million in expenditures, a new report says.

In its October 31 report, the Plante Moran audit, tax, consulting and wealth management firm analyzed 38 “flagged transactions” that were previously identified as questionable in a December 2019 report by the national accounting firm, Clifton Larson Allen LLP.

On Thursday, November 10, OHA Trustees held a news conference to discuss the findings and promise “a new era of accountability.”

“This board will seek accountability,” said Hawaiʻi island trustee Mililani Trask from a podium. “And where our jurisdiction ends, we will take it to the next level, and set a new standard – right now – that there will no longer be tolerated waste, abuse of our people’s trust assets. And those who are responsible will be brought to accountability.”

In a separate news release, OHA Trustee Keli‘i Akina – who spearheaded the Clifton Allen Larsen review – said the board owes it to beneficiaries “to follow through and see that instances of fraud, waste, and abuse are investigated and referred to the appropriate agencies for action.”

Three years ago, during a period of critical transition, the Office of Hawaiian Affairs (OHA) ushered in a new era of leadership by appointing Sylvia Hussey, a certified public accountant with decades of experience in financial administration, as Ka Pouhana (CEO).

“OHA is positioned to serve its beneficiaries better than ever before after a thorough overhaul of its policies, procedures and practices under the leadership of a new executive team,” said Board of Trustees (BOT) Chair, Carmen “Hulu” Lindsey at a press conference today.

Lindsey, who was elected Chair in late 2020, made it clear that she, her fellow trustees, and the executive team worked tirelessly to set the tone at the top for overall accountability.

“She provides the leadership that OHA needs to ensure ethical stewardship of the resources it manages for its beneficiaries,” said Lindsey of Hussey.

In September 2018, the OHA BOT engaged a top ten national accounting firm – CliftonLarsonAllen LLP (CLA) – to conduct a detailed review of a sample of OHA and limited liability company (LLC) contracts and disbursements from five fiscal years (2012-2016). While OHA was not required to take this extraordinary step, the BOT opted to do so despite OHA undergoing regular state audits and receiving clean annual independent financial audits for 14 consecutive years (now 18 years).

CLA presented the results of their engagement in December 2019, including 73 OHA, 30 LLC and 6 general oversight and governance recommendations. The report also identified 38 transactions from the five fiscal years reviewed (2012 – 2016) that may contain elements of fraud, waste and abuse.

Lindsey highlighted the improvement steps taken by OHA since December 2019 to better align policies, procedures and practices, through Administration’s Recommendations Implementation Plan which addressed CLA recommendations, including but not limited to:

• Implemented three major technology systems for grants management, accounting and contract management.
• Established a governance and policy framework for the BOT with updated bylaws.
• Approved policy amendments to improve fiscal management and transparency in budget preparation, format, and reporting requirements.
• Placed contract monitoring as the responsibility of the operating unit with oversight by the business line executive.
• Subjected all grants and sponsorships to approval by the BO
• Eliminated CEO-initiated sponsorships and the CEO management override practice.
• Required that employee-related events be compliant with OHA policies.
• Established a financial transparency website that includes 18 years of financial statements and independent auditors’ opinions, Trustee Protocol Allowance and Annual Reports.

In February 2022, OHA contracted Plante Moran (PM), an audit, tax, consulting and wealth management firm, to perform a detailed follow up of the CLA report. PM is a contractor experienced in forensic, accounting, audit, and related type engagements. They utilized standards in accordance with the Statement on Standards for Forensic Services established by the American Institute of Certified Public Accountants Council Forensic and Valuation Services Executive Committee. This committee provides guidance and establishes enforceable standards for members performing certain forensic and valuation services.

The PM report found 22 of the 38 questionable transactions with evidence of fraud, waste and abuse.

“Throughout both engagements (CLA and PM), OHA’s staff and BOT were fully cooperative and responsive,” said Lindsey.

OHA noted matters requiring criminal prosecution will be turned over to the relevant authorities for appropriate action.

“We are determined to ensure accountability for past wrongdoing,” said Lindsey.

Moving forward, the four strategic directions OHA has identified to impact the most change for its beneficiaries are education, health, housing and economic stability.

“We know we have to do much better to deliver what our beneficiaries need – everything we do and every decision we make will be informed by those strategic directions,” concluded Lindsey.

From the Trustee Akina news release:

A forensic review performed by auditing firm Plante Moran identified evidence of fraud, waste, and abuse related to 22 financial transactions, worth nearly $8 million, made by the Office of Hawaiian Affairs (OHA) from 2012-2016.

“The forensic review by Plante Moran confirms my concern that fraud, waste and abuse were occurring at OHA. That is exactly why I called for an independent review of OHA’s financial transactions,” said Trustee Keli‘i Akina. “I commend OHA’s administration for adopting the necessary policies that seek to prevent these actions from occurring again. But it is now time for OHA to take the appropriate steps to ensure that we uphold our fiduciary duty by holding the individuals who were involved in these transactions accountable for breaching their fiduciary duty. We owe it to our beneficiaries to follow through and see that instances of fraud, waste, and abuse are investigated and referred to the appropriate agencies for action.”

In 2017, Trustee Akina’s first major action in office was spearheading the Clifton Allen Larsen (CLA) independent review of OHA’s financial transactions from 2012-2016. In 2019, CLA reported their findings which included 38 “red flag” transactions. These findings showed indicators of fraud, waste, and abuse. In response, OHA implemented Board-approved policies, procedures, and practices that intend to mitigate these potential issues from occurring in the future. In 2022, OHA contracted with Plante Moran, a forensic auditing firm, to determine whether the 38 “red flag” transactions had actual evidence of fraud, waste, and abuse.