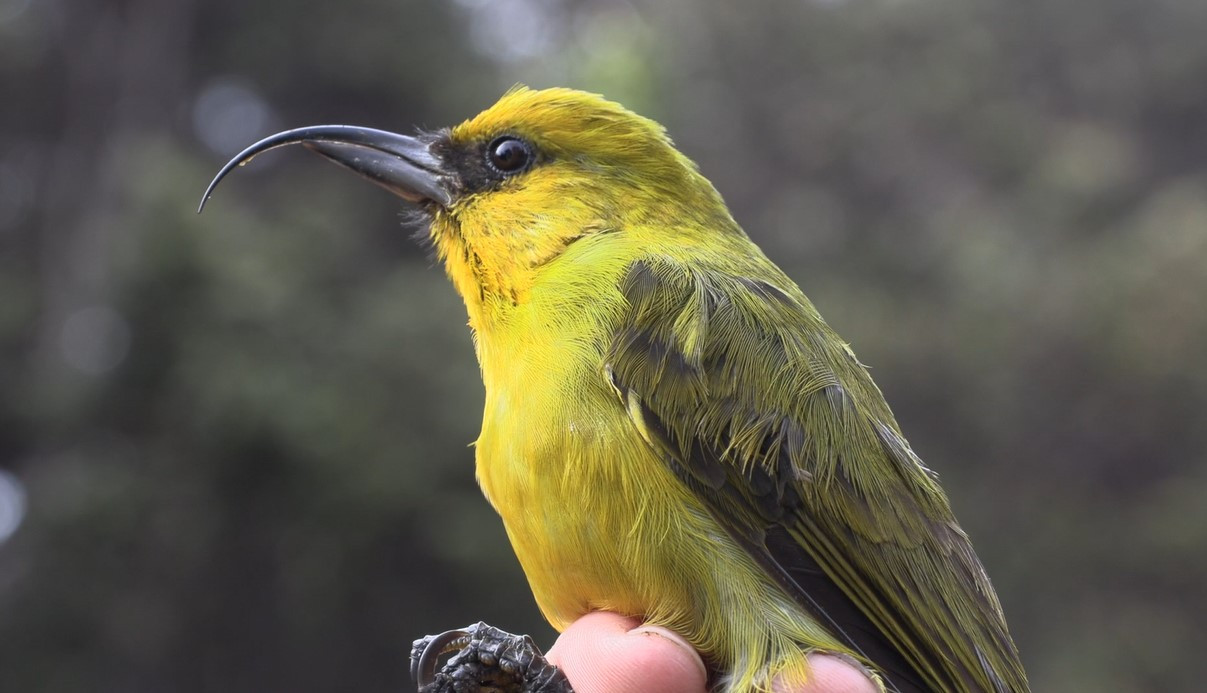 PUʻU MAKAʻALA, Hawaiʻi - The Hawaiʻi DLNR tells the story of the nine-years-old Christmas, or Mele, believed to be the oldest living ʻakiapōlāʻau in the wild. 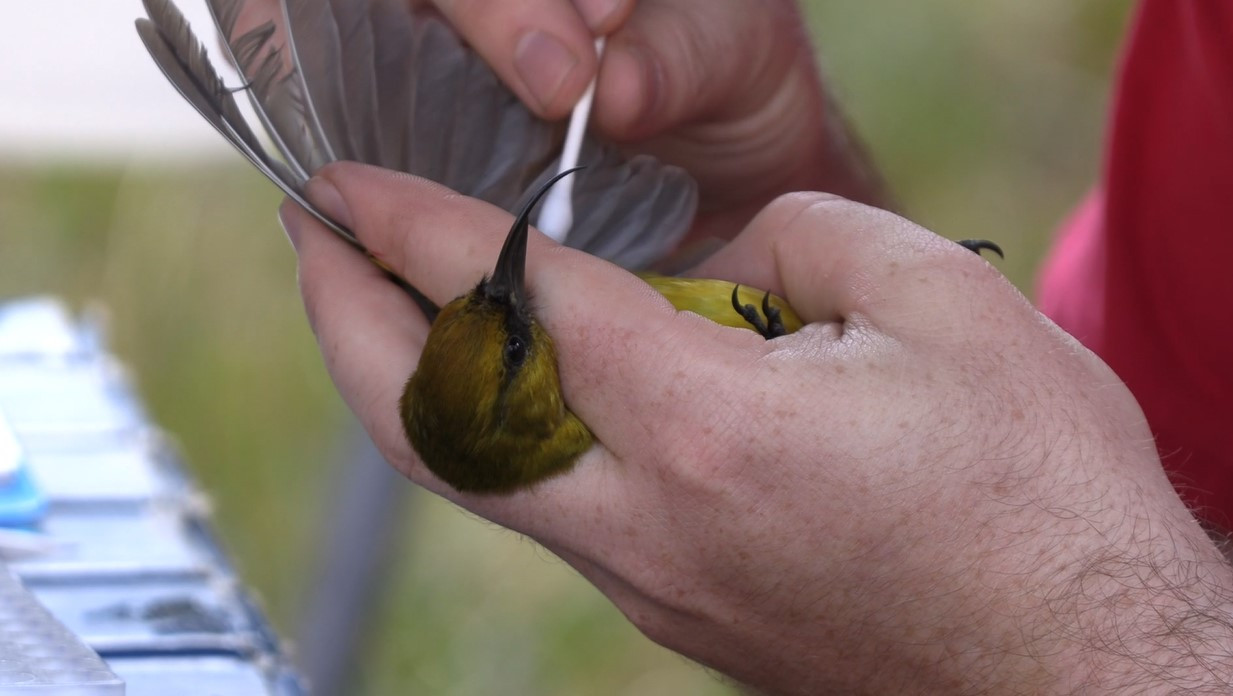 (BIVN) – This holiday season, the Hawaiʻi Department of Land and Natural Resources is telling the story of “Christmas” a native ʻakiapōlāʻau honeycreeper, and the ongoing efforts to save endemic Hawaiian birds from extinction.

The fate of several types of Hawaiian honeycreepers hangs in the balance, with the possibility of at least two species going extinct in the very near future.

ʻAkiapōlāʻau, a Hawaiian honeycreeper endemic to Hawai‘i Island, have long, curved beaks evolved to fill the niche occupied by woodpeckers. They feed on insects from the branches of native trees and nectar from flowers shaped like their bills and also look for larvae on the forest floor. An endangered species, there are only around 1,900 ʻakiapōlāʻau remaining.

One ʻakiapōlāʻau is named Christmas because of the red and green leg band put on him by researchers to identify him when he’s caught in mist nets in the sprawling 19,000-acre Pu‘u Maka‘ala Natural Area Reserve (NAR), outside Hilo. 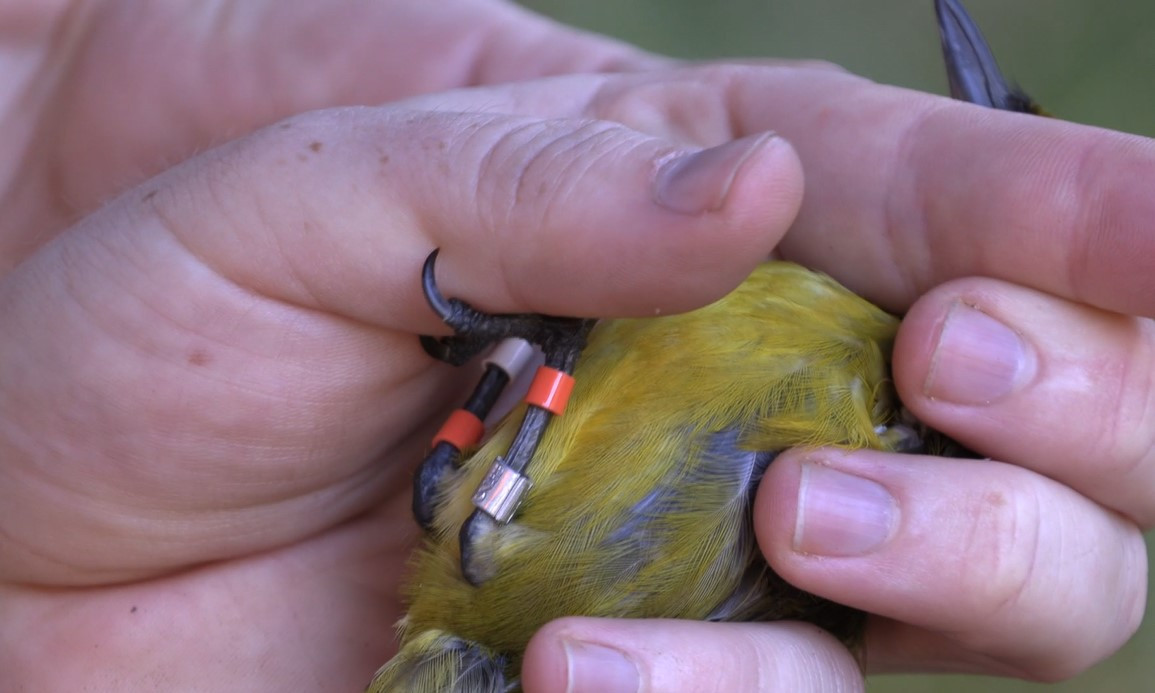 Christmas, or Mele, is nine-years-old and believed to be the oldest living ʻakiapōlāʻau in the wild.

Bird researchers, like Bret Nainoa Mossman, routinely use nets to catch numerous species of honeycreepers to test them for avian malaria, the disease that is threatening ʻakiapōlāʻau and all Hawaiian honeycreepers, some with imminent extinction.

“1,900 birds seem like a high number, but ʻakiapōlāʻau have been on the endangered species list since 1967 because of their low population and reproductive numbers, a fragmented population and habitat loss. However, aggressive forest restoration, predator control, and removal of feral ungulates in the natural area reserve and by neighboring watershed partners is painting a really heartening story,” Mossman explained.

ʻAkiapōlāʻau population increases can be attributed to those decades of forest management and restoration, and recent efforts to reduce feline and rodent predators.

Mossman added, “We’re also particularly excited about the ʻōmaʻo because they eat fruit and are doing some planting (forest restoration) for us. They’re actually helping us to regenerate the native forest even quicker than if we were doing it ourselves.” 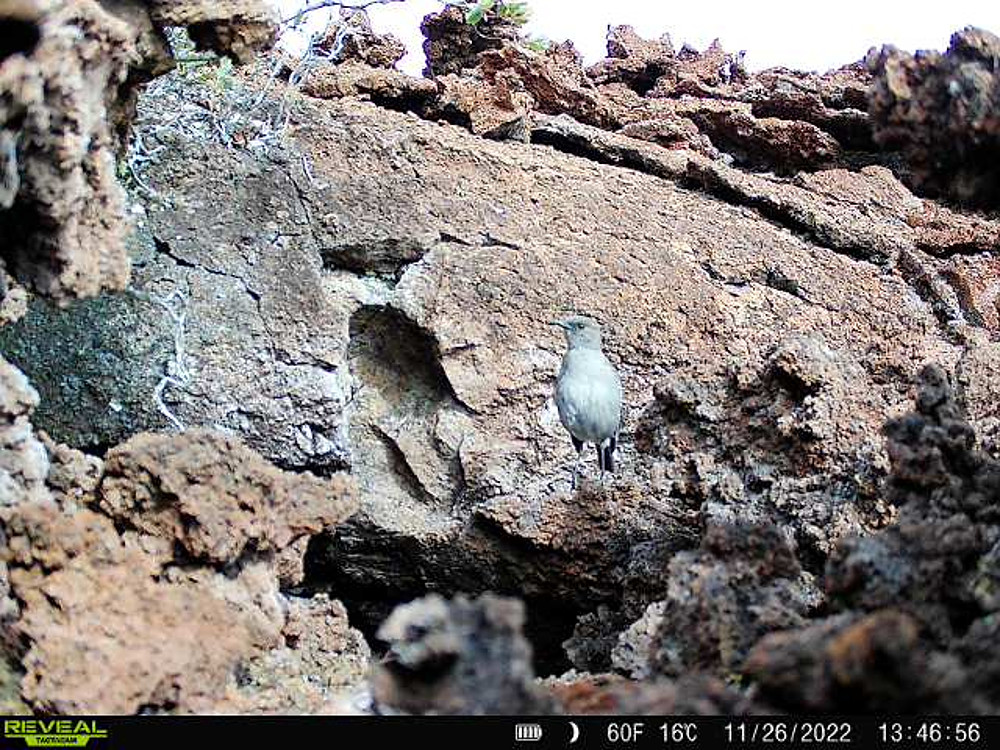 Moreover, ʻōmaʻo have shown resistance to avian malaria. “They seem to be able to live with the disease, but malaria coupled with predators is still driving them to decline in numbers,” Mossman said. There are an estimated 100,000 ʻōmaʻo on the Big Island and they gained some notoriety during the recent Mauna Loa eruption where field cameras caught them hopping around in the lava right near an active fissure.

In every species and in every bird, researchers find little presents, nuggets of knowledge, that are helping them learn lessons that may prove helpful in the continuing battle to reduce mosquito populations in their habitats and control avian malaria.

Tens of thousands of koa trees have been planted at Pu‘u Maka‘ala and on neighboring lands, but it takes roughly ten years for them to become good bird habitat. Mossman says many of the koa were planted in the last seven or eight years, but already ʻakiapōlāʻau and ʻalawī are starting to use the koa trees.

One of Christmas’ offspring has moved from the north side of the NAR to the south side, to an area where 10,000 koa trees have been planted. “It’s rewarding to see a ʻakiapōlāʻau we banded as a baby in this kipuka, and he has now settled in a completely different place. So, we’ve seen three generations of ʻakiapōlāʻau, in the five years I’ve been working here.”

Mossman noted. “It’s been really nice to see that we can keep tabs on these birds, track their relationships, and observe how they’re taking advantage of what we’ve created for them. Something more to celebrate this holiday season.”