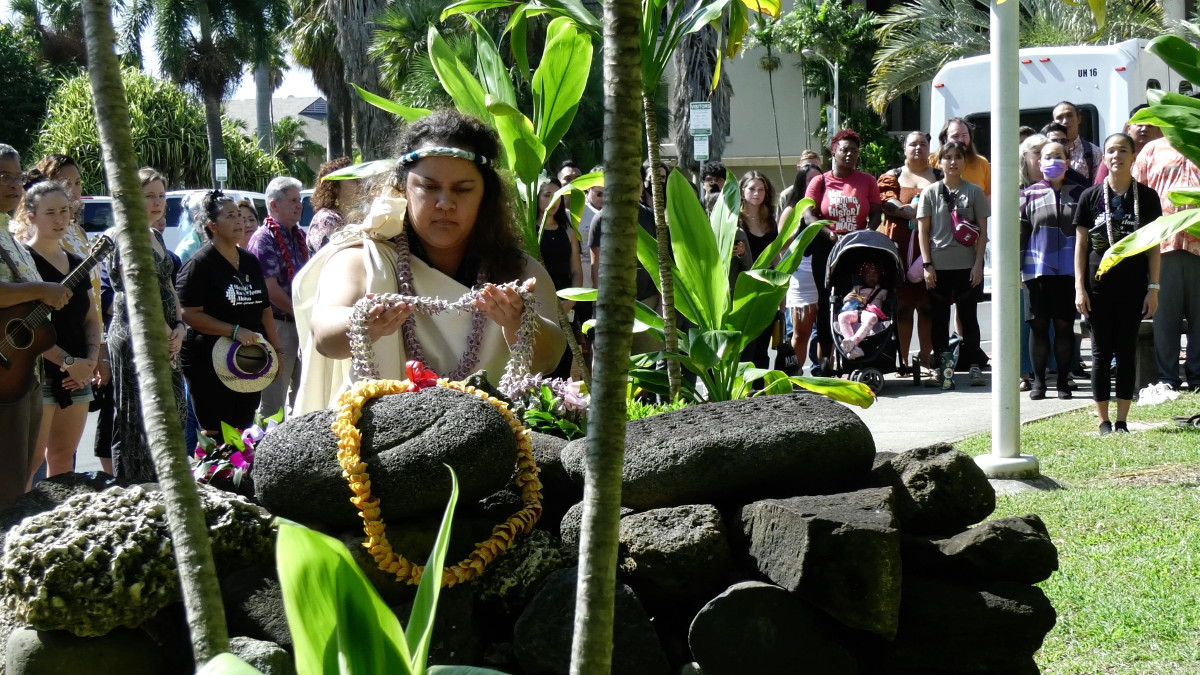 HONOLULU - The inaugural event at the University of Hawaiʻi at Mānoa was also an observance of the National Day of Racial Healing. 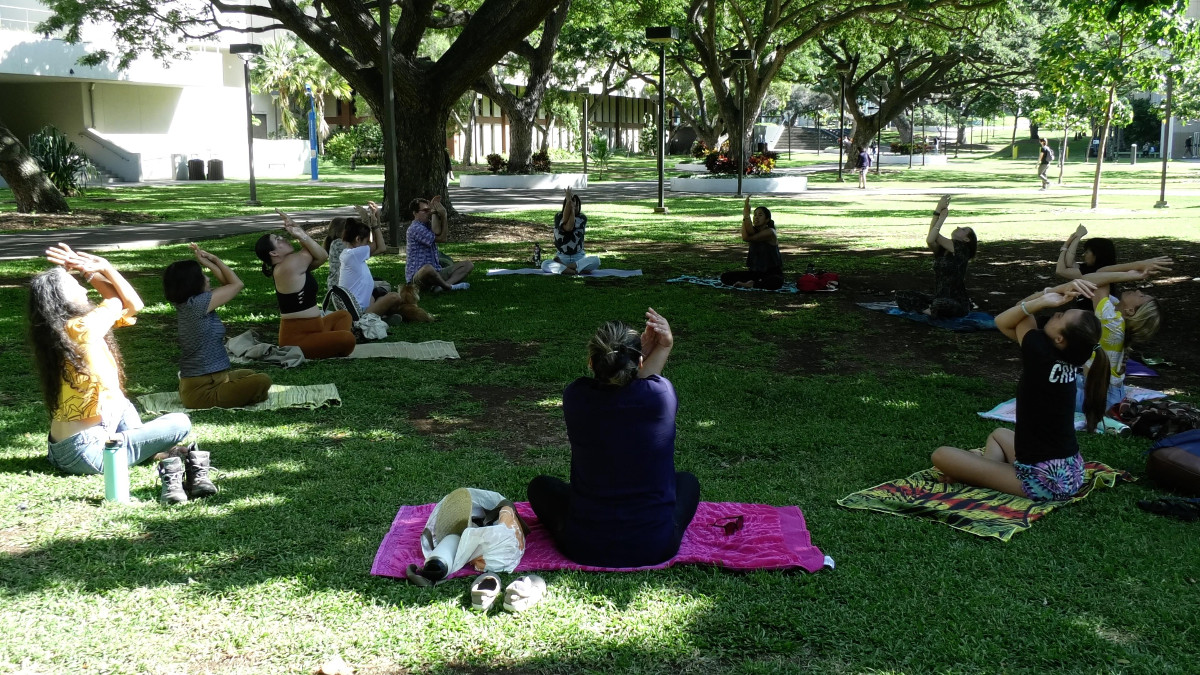 “A range of workshops such as meditation, oli (chant) and mālama ʻāina were held at the event.” Photo courtesy UH.

(BIVN) – The January 17, 1893 overthrow of the Hawaiian Kingdom was marked by an inaugural event held by the University of Hawaiʻi at Mānoa on Tuesday. The event also marked the 7th annual National Day of Racial Healing.

In an effort to mark 130 years since the overthrow of the Hawaiian Kingdom and the 7th annual National Day of Racial Healing, the University of Hawaiʻi at Mānoa held an inaugural event, Hawaiʻi Kuʻu Home Aloha (Hawaiʻi my beloved home). Hosted by the UH Mānoa Native Hawaiian Place of Learning Advancement Office (NHPoL), more than 200 participants gathered on campus across McCarthy Mall to participate in free activities to promote learning, connection and deep reflection.

“Our goal was to bring folks from various communities from across Hawai‘i together to build pilina–-connections and relationships-–as a critical step in working together to take care of our shared beloved home,” said Kaiwipunikauikawēkiu Punihei Lipe, UH Mānoa Native Hawaiian Affairs Program Officer.

Students, faculty, staff and members of the community took part in a variety of workshops throughout the day from oli (chant) to meditation and mālama ʻāina (care for the land).

The first-ever event opened with learning an oli, composed by Kumu R. Keawe Lopes, Jr., director of the UH Mānoa Kawaihuelani Center for Hawaiian Language. UH Mānoa Provost Michael Bruno was among attendees who learned Lopes’ chant composition, Welina Mānoa which honors the elements unique to the ahupuaʻa (land division) where the university is located.

“I was struck by people who made comments, several of them used the word grounded. A few expressed gratitude that before they had to run off to class it was good to get grounded in this place,” said Provost Bruno. “I thought that was super.”

A group of attendees also opted to connect with ʻāina joining UH Mānoa Campus Arboretum Curator Nōweo Kai. They engaged in huli ka lima i lalo (turn your hands to the ground) and learned how to care for meakanu (plants) on the Mānoa campus.

Participants were also invited to share their moʻolelo (story) out loud through an innovative writing workshop hosted by playwright and story coach Sean Dunnington. The activity centered around expressing one’s experience of Hawaiʻi as home. 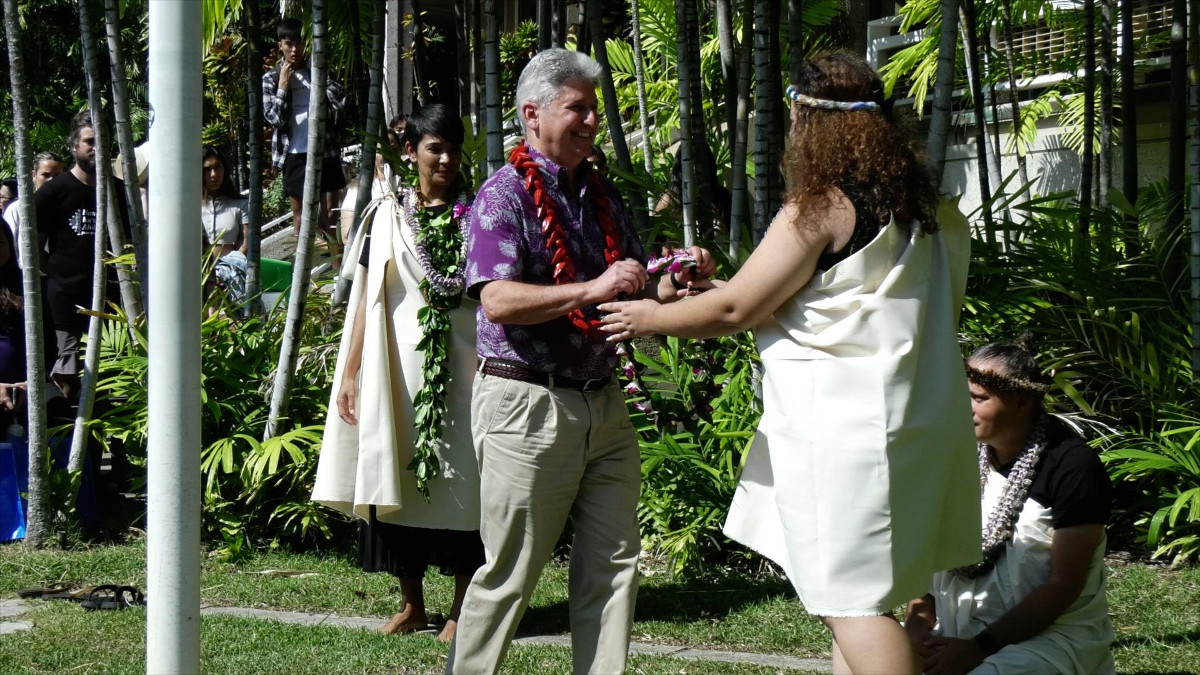 A procession gathered at noon to present hoʻokupu (offering) in honor of Hawaiʻi’s last reigning monarch at Ke Ahu o Kamakaʻeha (Liliʻuokalani altar) fronting the Queen Liliʻuokalani Student Services Center. Oli and lei were gifted to commemorate the Queen’s legacy and reflect upon the 1893 overthrow of the Hawaiian Kingdom.

“As a Truth, Racial Healing, and Transformation Campus Center, it is our kuleana (responsibility) here at UH Mānoa to highlight and share the many truths of our communities,” Lipe said. “The overthrow of Queen Lili‘uokalani and the Hawaiian Kingdom is not only a part of our history but also our current reality and can be felt in every part of Hawai‘i today. That’s why it is important to create spaces to remember and explore what the overthrow meant and continues to mean for us.”

The procession then proceeded to Martin Luther King, Jr.’s honorary plaque near the art department on campus. Hoʻokupu were placed to pay homage to one of the most prominent leaders in the civil rights movement.

Niya Denise McAdoo is earning her masters degree in educational administration at UH Mānoa and was moved to tears during her keynote address near the MLK plaque where she expressed the importance of forwarding the icon’s mission.

“It’s important for all of us to acknowledge that we all have a part to play. We all have a kuleana, whether that’s individually, as a community, as a university, as faculty, staff, administration,” said McAdoo. “We all have a responsibility in our everyday lives in the work that we do to push the mission of racial equality.”

UH Mānoa is one of more than 60 Truth, Racial Healing, and Transformation Campus Centers (TRHT) across Hawaiʻi and the U.S. selected to implement ambitious, visionary action plans that tackle historical and contemporary effects of racism. The TRHT Center at Mānoa is deeply rooted in ʻike Hawaiʻi (Hawaiian knowledge) and led by the NHPoL Advancement Office which helps to shepard the mission for the campus to become a Native Hawaiian Place of Learning. Its Hawaiʻi-grounded approach envisions a pae ʻāina ʻo Hawaiʻi (Hawaiʻi archipelago) in which each individual, family and community recognize their collective and interdependent kuleana regardless of race to aloha one another and ʻāina. This interwoven approach has been recognized on a national platform.