A 45 foot sailboat ran aground on the reef fronting the first pavilion at the Old Kona Airport on Sunday. 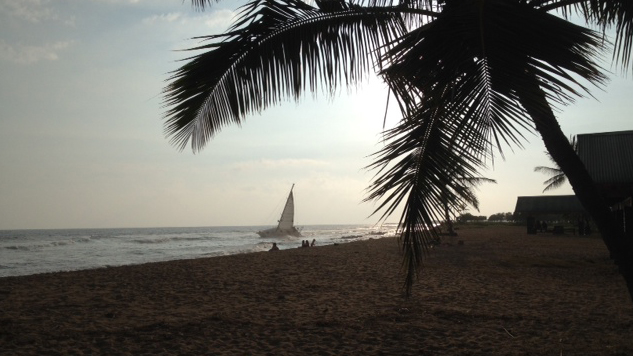 UPDATE (May 21, 2014) – The state is stepping on the removal of a 40 foot sailboat which ran aground on the reef off the Old Kona Airport County park.

The Department of Land and Natural Resources’ Division of Boating and Ocean Recreation will work with Cates Marine Service to remove the intact grounded vessel SEAQUEL and dismantle it on land. The vendor was on site this morning to inspect the grounded vessel and meet with County Parks personnel, and has provided DLNR a cost estimate for the work.

DLNR says an archeological monitor will be on site while work is being performed. That work should start on Wednesday with full mobilization underway by Thursday morning, as long as surf conditions allow.

According to the state, the owner of the stranded sailboat is out of California and did not have vessel insurance and cannot afford to pay for salvage. DLNR is moving quickly to prevent further damage to the reef.

KAILUA-KONA, Hawaii – A 45 foot sailboat ran aground on the reef fronting the first pavilion at the Old Kona Airport on Sunday.

The fire department reports that the man and woman who were aboard the stranded vessel jumped into the water and swam to shore.

From the fire dispatch remarks:

RB07 (Rescue Boat 7) launched from Kailua Pier responding to report of vessel taking on water approx. 100-200 ft offshore fronting old A’s with two souls onboard. While enroute, notified of report that two parties entered the water to attempt to make their way to shore and that the vessel had run aground on the reef. M07 directed to shoreline access location of the vessel. RB07 arrived on scene and confirmed that vessel had run aground on the reef. HPD officers on shore report that the parties are on shore, and awaiting M07. No injuries reported. Coast Guard also notified and responded.Hawaii County Fire Dept.