Draft Environmental Assessment finds no significant impact from sale Hamakua Coast, Hawaii – A 150 page document that studies the proposed land sale of the Koholalele tract of the Hamakua lands has been published, and is available online for viewing. The document looks at all the alternatives to the land sale, like the execution of […]

A 150 page document that studies the proposed land sale of the Koholalele tract of the Hamakua lands has been published, and is available online for viewing.

The document looks at all the alternatives to the land sale, like the execution of a land exchange or the leasing of the lands, but concludes that a sale would be the best approach. It also makes a Finding of No Significant Impact.

The Site lies between the 800 and 2,400-foot elevations on the windward northeast side of Hawaii Island. With an average yearly rainfall of 80 to 120 inches, the document, prepared for the Hawaii County Finance Department, expects the land to remain in agricultural use.

According to the summary of the Draft EA:

GOALS AND OBJECTIVES OF THE PROPOSED ACTION
The County acquired the Site from the bankrupt Hamakua Sugar Company in 1994 in a settlement of taxes owed to the County of Hawaii. Prior to the County’s acquisition, the property had been in active sugar cane production. The County Department of Finance will be selling this property in accordance with County Council Resolution No. 161-02, adopted on January 24, 2002, authorizing the sale of the Site. Although the sales proceeds are not considered property tax revenues that are subject to the 2% allocation into the Public Access, Open Space, and Natural Resources Preservation special fund pursuant to Hawaii County Code §2-214(b)(5), the Mayor has proposed that the proceeds be deposited into that special fund or exchanged for any land on the Open Space priority list. The Hawaii County Department of Finance (DOF) proposes to initially sell or exchange Parcel 1 at public auction, and may later consider selling or exchanging Parcel 5.

NEED FOR THE PROPOSED ACTION
The County has not used, generated revenues, or otherwise derived any benefit from the Site since acquiring it in 1994 from Hamakua Sugar Company in lieu of real property taxes owed. The County views that the sale of these lands will serve the greater public interest in that it will allow these lands to return to productive agricultural use while allowing the County to recoup previously unpaid real property taxes that it may use to fund existing or additional programs. The sale will also mean that these lands will revert to private ownership and will be subject to real property taxes that are currently not being paid under County ownership.

POTENTIAL USES
While the lands are expected to remain in agriculture, the exact use and any associated impacts will depend on the buyer. This EA, however, discusses potential impacts and mitigation measures for the possibility that the Site would be subdivided up to the maximum number of lots permitted by zoning with a farm dwelling built on each lot. The Site is zoned A-40a, allowing dwellings at a minimum lot size of 40 acres. Assuming 20% of the 1040-acre Site would be used for roadways, the Site could be further subdivided into a total of 20 lots. This hypothetical number of lots also assumes that water is or will become available.

TIMING OF ACTION
The proposed sale or exchange is tentatively planned for the later part of 2010.

A Cultural Impact Assessment digs a little deeper into the history of the land parcel:

The CIA found that the project site was awarded to Kailakanoa (LCA 26-B, R.P. 4527) as part of a single large Land Commission Award.

As described in the previous section of this report, there is very limited pre-historic information about the site and surrounding lands. The CIA reports that the Koholalele ahupuaa and surrounding lands were thought to be sparsely populated due to poor access to marine resources and distance from population centers such as Hilo, Waimea and Waipio.

In published mo’olelo, Koholalele, translated as, “leaping whale” is mentioned in the Heart Stirring Story of Ka-Miki. This story was published between 1914 and 1917 although the story is set in the 1300’s. No other mention of Koholälele was found in published mo’olelo. More information is available regarding the sugar industry which affected plantation lands such as the site and surrounding area. The site was in sugarcane production for approximately 100 years until 1994 when Hamakua Sugar closed its doors. The CIA provides a history of sugar in Hawaii, citing references to some of the earliest mentions of sugar production in the early 1800’s. Large-scale sugar production on the Island of Hawaiÿi was in operation by 1839. At that time, growing, harvesting and processing of sugar was rudimentary, relying on Hawaiian labor and the power of water, oxen, mule and horse. The industry grew through the 1800’s as a result of increased demand from the U.S., a reduction in import duties, introduction of new cane varieties and importation of labor.

The Hamakua Mill Company, which eventually evolves to be the Hamakua Sugar Company was founded in 1877 by Theo Davies and Charles Notley, Sr. By 1910, the company had 4,800 acres planted in sugarcane; employed more than 600 people; and, had a warehouse and landing below the cliff at Koholalele. Five individuals who either worked for the Hamakua Sugar Company or live in the area and have knowledge of the site were contacted for interviews. None of the cultural informants had knowledge of past or ongoing cultural practices on the project site. Additionally, letters of inquiry were sent to organizations whose expertise would include the project area. Apart from a letter acknowledging receipt of the letter of inquiry, no organizations responded with information concerning the potential for cultural resources to occur in the project area or suggestions for further contacts. Public notices were also published in Ka Wai Ola, The Honolulu Advertiser and the Hawaii Tribune Herald.

The CIA concludes, “Based on organizational response as well as archival research, it is reasonable to conclude that, pursuant to Act 50, the exercise of native Hawaiian rights, or any ethnic group, related to gathering, access or other customary activities will not be affected by development activities on this parcel. Because there were no cultural activities identified within the project area, there are no adverse effects.”

The county has had no luck, thus far, in selling other unused Hamakua lands in Paauilo. The effort became a source of controversy in 2009 when the some members of the community – and Hamakua councilman Dominic Yagong – resisted the mayor’s plan to sell the lands. Native Hawaiian claims that the land parcels had a clouded title further complicated the matter.

The Draft EA says the county “explored the option of leasing the land to individuals or businesses that would put the land to productive use. Under the leasing alternative, the County would bear the costs associated with owning the land and administering the leases and forego the immediate larger financial benefits of selling the lands. Under this alternative, no real property tax revenues would be realized.”

1700 acres of county land in Kapulena have instead been offered for affordable agricultural leases. The Draft EA says the planned Kapulena leases, “would likely exceed the prevailing demand for diversified agriculture in the Hamakua area.” 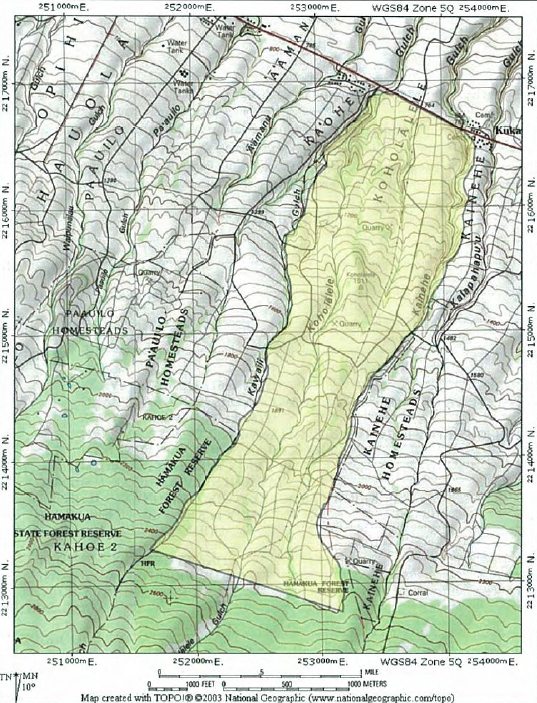