Activity Summary for past 24 hours: There have been significant changes as Kilauea volcano continued to erupt at two locations: On the east rift zone, a fissure eruption that started yesterday afternoon is continuing intermittently at a location approximately 2 km WSW of Pu`u `O`o. The floor of Pu`u `O`o collapsed yesterday and the Nov. 29 flows were weakly active this morning. At the summit, the lava lake level receded deep below the rim of the vent inset within the east wall of Halema`uma`u Crater. Summit and east rift zone seismicity remained significantly elevated. 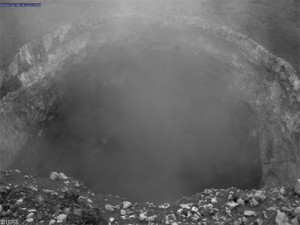 Lava lake at Halemaumau drained out of view

Past 24 hours at Kilauea summit: The lava level receded rapidly through yesterday afternoon and evening but seemed to slow since midnight; at 7:03 am, a large collapse caused the lava lake level to recede almost beyond view of the webcam. The summit tiltmeter network recorded continued deflation at a steady rate amounting to almost 28 microradians by this morning. Seismic tremor levels elevated further between about 2 and 4:30 pm yesterday and then increased to almost ten times background between 8 pm last night and 4 am this morning.

Approximately one-hundred-and-fifty earthquakes were strong enough to be located within Kilauea volcano – more than 100 were clustered in the east rift zone, in location, between Maka`opuhi and Napau Crater and, in time, between 2 pm and midnight and about 30 were located within the summit area including five estimated to be magnitude-2.5 and above this morning.

The summit gas plume is wispy and moving to the southwest this morning. The most recent (preliminary) sulfur dioxide emission rate measurement was 400 tonnes/day on March 2, 2011 averaged over at least one high lava stand during which the emissions may be halved. 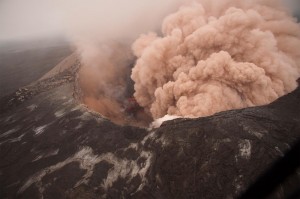 Ash cloud rising from Pu`u `Ō `ō as crater floor collapses due to magma withdrawal. Incandescent rubble can be seen crumbling and rolling down the scarp. The east rim of Pu`u `Ō `ō is in the foreground.

Past 24 hours at the middle east rift zone vents: The small fissure eruption that started around 5 pm yesterday had paused by the time ground crews arrived at 9:55 pm; however, the eruption resumed from approximately the same location by 00:40 am this morning before stopping a second time at 1:50 am. At 4:22 am this morning, spattering to the height of nearby trees resumed. Two more fissures opened in the same vicinity at 5:45 am this morning producing more gas than lava. Gas jetting has been audible for most of these spattering episodes as activity waxes and wanes.

The tiltmeter on the north flank of Pu`u `O`o recorded over 150 microradians of deflation from 2 pm yesterday; the deflation rate has markedly slowed by this morning. Seismic tremor levels remain significantly elevated and variable in this part of the rift zone.

Incandescence within the collapsed Pu`u `O`o was due to rockfalls. Activity on the Nov. 29 flow was significantly weaker overnight and may be residual lava left in the tube. Thanks to the Hawai`i County Fire Department for providing a helicopter for yesterday afternoon’s overflight to assess eruption conditions. HVO crews will do another overflight this morning.

Maps, photos, Webcam views, and other information about Kilauea Volcano are available at http://volcanoes.usgs.gov/hvo/activity/kilaueastatus.php A daily update summary is available by phone at (808) 967-8862.

A map with details of earthquakes located within the past two weeks can be found at http://tux.wr.usgs.gov/ 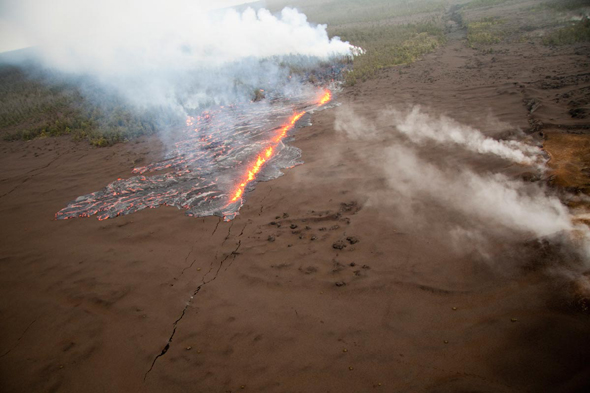 ABOVE: View toward the SW of fissure eruption. Fissure segment in forest has shut down. Compare to earlier photos before fissure opened up in tephra.