Media release | Hawaii State Senate (Honolulu) — The Hawaii State Senate officially adjourned the 2011legislative session today with the passage of a final four bills and the singing of ‘Hawaii Aloha’. During the session, which began on January 19, more than 3,000 bills were introduced by the State Senate and House of Representatives, with […] 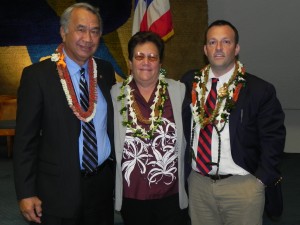 (Honolulu) — The Hawaii State Senate officially adjourned the 2011legislative session today with the passage of a final four bills and the singing of ‘Hawaii Aloha’.

During the session, which began on January 19, more than 3,000 bills were introduced by the State Senate and House of Representatives, with about 250 of them getting final passage. The majority of such bills still await final approval by the Governor.

“It was a very challenging session,” said Senate President Shan Tsutsui, “because our state is facing very difficult economic times which limit how much we are able to do. But it was also a rewarding session because in the end we were able to balance our budget while protecting the most vulnerable in our society and we passed some of the most historic legislation in the history of Hawaii.”

Amongst the more memorable measures that were passed this year were the re-structuring of the Department of Education, the approval of Civil Unions and the passage of a bill that recognizes Native Hawaiians as he only original indigenous people of the islands. In addition, the Senate approved legislation that protects home owners by reforming the foreclosure process; legislation that makes Quest and Medicaid benefits more accessible to people in rural areas; and new rules that will help the State better administer and manage public lands.

“While we did not please everyone with our budget,” said Tsustui, “we were able to avoid raising the State General Excise Tax (GET) and taxing the pensions of our elder citizens. Those were big concerns at the start of the Session.”

Through their deliberations with the House of Representatives, the Senate was able to balance the budget primarily through a temporary suspension of some business income tax exemptions, an adjustment in rental car surcharges and the transfer of some hotel room tax income to the State, as well as several other smaller income generating actions.

The Hawaii Legislature is scheduled to convene again next January for their regular 2012 Session, but in the intervening months all Senators will continue to meet with their constituents and be available for matters of government and civil concern.

We started this legislative session by laying out a bold plan to move Hawai’i in a new direction. We were determined to conduct ourselves with a spirit of collaboration. We said repeatedly that everyone must contribute and that our decisions must reflect our values and priorities.

We have found that support for the political status quo, abetted by private interests, remains strongly in place. It will take time and action by the executive to change this culture.

While we did not get all we wanted in this legislative session, we have made meaningful strides forward.

We signed a civil unions bill that ensures equal rights for all people of Hawai’i. We did this without recreating the heated battle lines of the past.

We secured private funding to transform the state’s antiquated technology system so we can streamline government services and save taxpayers millions of dollars.

The people of Hawai’i don’t want to hear excuses and arguments about why things can’t be done. They want action. Our administration will take the budget we have and transform government as we know it by being innovative, resourceful and relentless in the face of our challenges.

In the coming weeks and months, you will hear of more partnerships and initiatives to move toward the New Day plan—educational excellence, energy independence and a sustainable economy.

My administration is ready and moving; our community partners are ready, and the people of Hawaii are ready to bring positive change. There is no doubt in my mind that, together, Hawai’i is on the way to a New Day.