Pete Hoffmann will not run for Hawaii County mayor

HAWAII COUNTY: Councilman Pete Hoffmann ended the speculation concerning his political future as it relates to the mayor’s office today, saying he will not run for the position next year. In a statement entitled “A Bridge Too Far” issued to news media, Hoffmann wrote: Recently there has been some speculation regarding my political aspirations since I am prohibited […]

HAWAII COUNTY: Councilman Pete Hoffmann ended the speculation concerning his political future as it relates to the mayor’s office today, saying he will not run for the position next year.

In a statement entitled “A Bridge Too Far” issued to news media, Hoffmann wrote:

Recently there has been some speculation regarding my political aspirations since I am prohibited from running for a fifth consecutive term as Councilman next year. I’ll admit that I have fueled some of that speculation and indicated that I am considering whether I should campaign for Mayor. It is no secret that I am disappointed with the leadership demonstrated by Mayor Kenoi and have felt that I could do much better for the residents of this County.

However, translating that political desire/commitment into election votes is not easy. I have analyzed the situation taking into account my participation in a campaign against the two most likely candidates for the Mayor’s office in 2012; Mr. Kenoi and Dominic Yagong. From my perspective, I sought to determine whether I could survive the primary election, i.e. be one of the two candidates involved in a runoff in November 2012. My objective has always been not merely to run for office – I don’t obtain much satisfaction from merely seeing my name in the papers. My goal in campaigning would be to have a reasonable chance to win and thereby make a difference.

My analysis, some of which relied on a professional survey, provided me with inconclusive results. After further discussion with my wife, who is always involved in decisions of this nature, I have decided I will not seek the office of Mayor next year. I am undecided if I will consider any other political office at this time, but unless the “candidate landscape” for the Mayor’s office changes significantly, I will not be a participant in that race.

One of the most rewarding aspects of being in public office at any level is the opportunity to meet and work with interesting and talented personalities. I have been honored to have had that opportunity while serving as Councilman. It truly makes a sometimes frustrating experience worthwhile. To those individuals island-wide, who have urged me to run for Mayor, and/or who have simply encouraged me to continue my advocacy for resolving some of the contentious issues facing our County, I can only extend thanks and deep appreciation. You have made this effort exciting.

As we look ahead, I urge all to continue to support candidates in next year’s elections who are able to distinguish between narrow political objectives and the best interest of the residents of our island. I am committed to evaluate my choices on that basis. Meanwhile, I will continue to work hard to bring positive change and effective government to our County and encourage all to support those efforts. Thank you again for allowing me the chance to serve and try and make positive changes for our County. 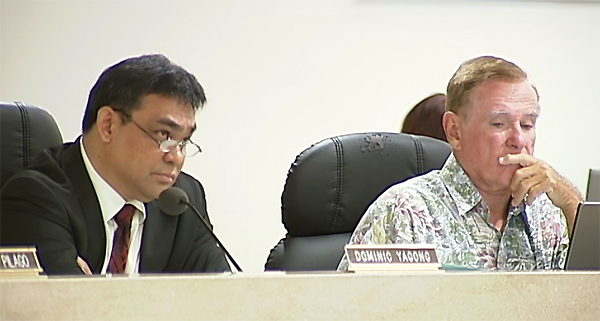 The announcement appears to enforce the common belief that we will see Council Chair Dominic Yagong, seen in the photo above to Hoffmann’s right at a recent council meeting, challenge Mayor Kenoi for the seat.