HAWAI‘I ISLAND, Hawaii — At 2:05 p.m., HST, this afternoon, the USGS Hawaiian Volcano Observatory (HVO) monitoring network detected the onset of rapid deflation of the Pu‘u ‘O‘o crater floor. Soon thereafter, at 2:20 p.m., lava broke out at the base of the west flank of the Pu‘u ‘O‘o cone.

“Interestingly, as the crater floor deflated, lava in the perched lake within Pu‘u ‘O‘o Crater continued to circulate, just as it had over the past several weeks,” Kauahikaua noted, “but, by 3:15 p.m., the crater floor and lava lake began to collapse.”

HVO scientists at the eruption site reported a branched lava flow moving down Kilauea’s south flank. The weaker northwest arm was pushing into kipuka and forest, while the higher volume, larger south arm had advanced at least 3 km (1.8 mi) downslope as of 3:50 p.m. The lava flow is entirely within Hawai‘i Volcanoes National Park and poses no hazard to residents at this time.

Updates on the status of Kilauea’s east rift and summit eruptions are posted on HVO’s Web site every morning at http://volcanoes.usgs.gov/hvo/activity/kilaueastatus.php. Additional updates on the new east rift zone activity will be posted each afternoon as merited.

HVO webcam images of Pu‘u ‘Ô‘ô and surrounding area, including the site of the current activity, can be accessed at http://volcanoes.usgs.gov/hvo/cams/. The webcam images, which are updated every 5 minutes, are primarily for research and monitoring purposes, but are made available as a courtesy to the public.

The USGS provides science for a changing world. For more information, visit www.usgs.gov. 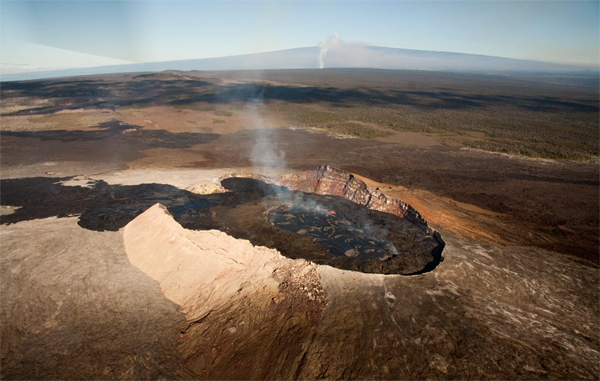 Photo above courtesy HVO, taken before the current lava breakout. The photo shows Pu‘u ‘Ō‘ō crater, looking northwest. In addition to flowing out of the crater to the southwest, lava has also been filling in the northeast side of the crater. Lava there is within 6 m (20 ft) of the crater rim. The gas plume from the vent at Kīlauea’s summit is in the background. The gentle slope of Mauna Loa volcano forms the skyline beyond.