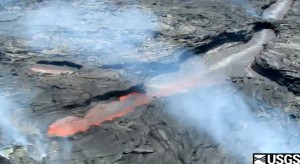 As we reported on Monday, the activity at the Pu’u O’o vent breakout may have slowed, but it is far from stopped.

Hawaiian Volcano Observatory geologists say the west flank vents remained active, feeding an elongate perched lava pond that extends to the southwest, which, in turn, fed a large `a`a flow that had advanced nearly to the west edge of the August 3rd lavas.

This overflight video taken by scientists on Monday shows there are several vents, topped by spatter cones – one a high as 20 feet – that are feeding narrow, fast-moving flows that feed into a broad area of ponded lava.

The active flows remained entirely within Hawai`i Volcanoes National Park and posed no direct hazard to any developed areas.

From the USGS-HVO August 10th Kilauea status update, the most recent information on the east rift zone eruption:

Lava continued to trickle into the deepest part of the collapsed crater floor; a new source on the south side of the collapsed floor joined the trickle and began to spatter weakly yesterday evening. The west flank vents remained active feeding an elongate perched lava pond that extended to the southwest (see images; yesterday, the west flank vents also fed a small flow which advanced a short distance northward before stalling yesterday evening. The active flows remained entirely within Hawai`i Volcanoes National Park and posed no direct hazard to any developed areas.

The GPS network around Pu`u `O`o Cone recorded slowing contraction across the cone. The tiltmeter on the north flank of Pu`u `O`o Cone recorded continued deflation with a brief period of accelerated deflation from 9:30 am to 3 pm yesterday, about an hour after a similarly-brief accelerated deflation at the summit; this may be a DI tilt event. Seismic tremor levels were low. The most recent (preliminary) sulfur dioxide emission rate measurement was 1,700 tonnes/day on August 5, 2011, from all east rift zone sources.