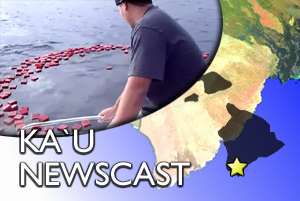 HILO, Hawaii: UH Hilo marine science students and collaborators have released sets of red, wood blocks from locations around the Big Island this week, in an attempt to monitor the path taken by floating debris.

Dr. Hank Carson, who supplied us with this video, says the red blocks are stamped with a message asking people to report where and when they found the block.

Carson says this study is investigating a possible link between local sources of plastic marine debris and accumulation areas such as Kamilo Point near South Point.

Students are monitoring floating debris retention booms in urban Hilo to quantify the amount and types of debris washed out of Hilo. Drifter releases nearby will simulate the fate of that debris had it been allowed to enter the ocean.

Dr. Carson says simultaneous releases from other locations will help them to understand debris movement around the entire island, or possibly to other islands.

Carson asks that if you or someone you know finds a block, please report the find to this email address (hilodrifter@gmail.com) or call 808-937-4289. Include the date and exact location of the find. It is also important to report the number stamped into the side of the block so it can be traced back to the time and location of release.

Kamilo Beach is a good example of a debris collecting beach on the southern end of Hawaii island.

In May 2010, Tim Bryan made the trip to the remote shoreline, and interviewed the Hawaii Wildlife Fund’s beach cleanup coordinator Megan Lamson.

The area is bracing for another barrage of rubbish, as the massive amounts of floating debris created by the destructive march 11th tsunami in Japan floats towards the Hawaiian islands over the next few years.