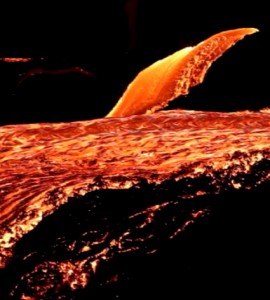 ROYAL GARDENS, Hawaii: Rushing lava from the East Rift Zone of Kilauea volcano has returned to the Royal Gardens subdivision, and already the intrepid lava lovers are making the dangerous hike to witness the spectacle.

Folks like Bo Lozoff, who lives in Kalapana Gardens – no stranger to the many lava flows that come down the pali over the years – who shot this video from the desolate and devastated neighborhood.

If it look like this lava fanatic has been missing his up close encounters with lava, that’s probably true… there hasn’t been an active lava flow on the coastal plain since the Kamoamoa fissure eruption in March 2011.

Leigh Hilbert, a professional lava photographer who has shared some of the most remarkable images of last year’s Kalapana flow, was also on hand… he says rivers of lava have already severed access to the remaining kipuka, and to Jack Thompson’s home – the famous Lava House bed and breakfast and the last inhabited home remaining in Royal Gardens.

Hilberts says a chopper came to take Jack off his property and out of the lava zone at 5:30 PM Sunday.

USGS Hawaiian Volcano Observatory scientists continue to monitor the activity. The following is from the daily Kilauea activity report, updated at least every 24 hours:

Lava continued to erupt into the perched pond in the east part of the Pu`u `O`o crater until just past midnight, shortly after the tiltmeter on the north flank showed a small deflation trend; the tilt is relatively flat this morning and is not following the DI pattern recorded at the summit. Lava continues to enter the tube system on the northeast flank of Pu`u `O`o; the tube system turns to the southeast 0.5 km and again at 2 km downslope. Seismic tremor levels near Pu`u `O`o were low. The most recent (preliminary) sulfur dioxide emission rate measurement was 500 tonnes/day on December 6, 2011, from all east rift zone sources.

Glow from the fissure and a skylight on the southeast flank of Pu`u `O`o continued to be visible in webcam views.

A new webcam on the coastal plain (not avialable on the public Web site) shows that lava flows are active this morning through the abandoned Royal Gardens subdivision 6.8 km (4.2 mi) southeast of Pu`u `O`o and on the coastal plain. The flows advanced about 0.6 km from the base of the pali by yesterday mid-morning, and they continued advancing overnight.