Media release from the W.M. Keck Observatory: Discoveries announced this week about the summer’s historic Pinwheel Galaxy supernova are due, in part, to both Keck telescopes and their uniquely powerful instruments. Two papers in the Dec. 15 edition of the journal Nature shed unprecedented light on the details of the stellar explosion—which was the closest […] 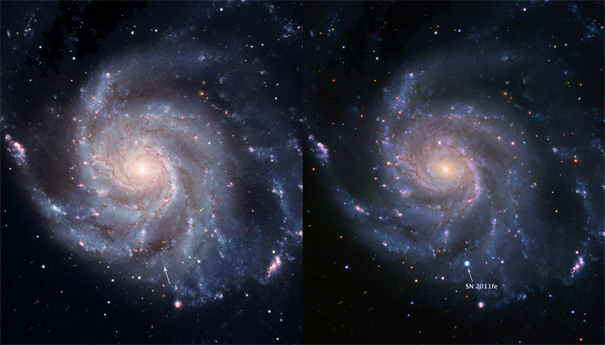 Discoveries announced this week about the summer’s historic Pinwheel Galaxy supernova are due, in part, to both Keck telescopes and their uniquely powerful instruments. Two papers in the Dec. 15 edition of the journal Nature shed unprecedented light on the details of the stellar explosion—which was the closest of its very important kind in decades.

The first role was played by the Keck II telescope which was used to precisely locate the August explosion, dubbed SN 2011fe. This was essential for finding the “progenitor” star that led to the explosion—or its companion star—in pre-explosion images of the Pinwheel galaxy.

University of California, Berkeley research astronomer Weidong Li pulled up images of the northern sky taken over the past nine years by the Hubble Space telescope in hopes of seeing the supernova’s progenitor star. Oddly enough, he found nothing. But Li’s initial disappointment quickly turned to excitement.

“We soon realized that the non-detection limit of the Hubble Space Telescope may be stringent enough to let us rule out some proposed progenitor systems,” he said.

To pinpoint the precise supernova location in the Hubble Space Telescope images, Li and his colleagues obtained a mosaic image of the field of SN 2011fe with the Near-Infrared Camera 2 (NIRC2) mounted behind the adaptive optics system on the Keck II telescope. The Keck adaptive optics image—which cancels out atmospheric distortions—was matched with Hubble Space Telescope/Advanced Camera for Surveys images, yielding a better-than-Hubble precision of 0.022 arc-seconds for the supernova position.

“Our paper is the first ever to exclude directly some of the major candidates for Type Ia supernovae,” said coauthor Joshua Bloom, a UC Berkeley astronomer. While the star that explodes to produce a Type Ia supernova is thought to be a white dwarf composed primarily of carbon and oxygen, the white dwarf presumably explodes because it pulls matter from a binary companion that to date has been a mystery.

Li and colleagues analyzed high-resolution Hubble data and calculated that the companion could not have been a red giant star, which typically are bloated and bright, or most types of helium stars, which also would have been visible.

This fits with theoretical modeling of the exploding white dwarf by the supernova’s discoverers: Peter Nugent, head of the Computational Cosmology Center at Lawrence Berkeley National Laboratory, and his colleagues. Nugent’s group used another observation from the Keck I that was gathered just hours after the exploding star was discovered. This was a high-resolution spectrum obtained with the HIRES spectrograph at the Keck I telescope. This spectrum, plus a low-resolution spectrum from the Kast spectrograph at the Lick 3-meter Shane telescope (Mt. Hamilton, California) allowed astronomers to estimate the time of explosion with high precision.

Nugent and his colleagues also published their conclusions in the Dec. 15 issue of Nature.

Together, the findings of Li’s and Nugents’s teams make astronomers confident that the companion was most likely either a normal star like the sun, a somewhat evolved star called a subgiant, or perhaps a white dwarf.

“The two papers suggest that a main-sequence star companion agrees with all the observed properties of the supernova progenitor luminosity limits and the evolution of the supernova,” said coauthor Saurabh Jha, an astronomer at Rutgers University.

Type Ia supernovae are bright and visible across huge cosmic distances, which allowed UC Berkeley’s Saul Perlmutter, his Nobel laureate colleagues and their teams to employ them as “standard candles” to measure the universe. In 1998, these studies revealed that the expansion of the universe is accelerating, now widely believed to require the presence of a mysterious “dark energy.”

“The discovery of the accelerating expansion of the Universe has revolutionized physics, and the repulsive dark energy may provide key clues to the long-sought quantum theory of gravity,” said UC Berkeley astronomer Alex Filippenko, who was a member of both of the teams that made the Nobel Prize-winning discovery. “But the actual origins of Type Ia supernovae have remained mysterious, and various aspects of the explosion are not well understood.”

“Our next step is to detect the surviving companion star, perhaps using the James Webb Space Telescope when it comes online. That will give us another opportunity to reveal more secrets about this supernova and ultimately help us understand the explosion physics of Type Ia supernovae, and possibly refine them as an even better cosmological distance ladder,” Li said.

EDITOR’S NOTE: About the above image, from BJ Fulton (LCOGT), PTF & the Space Telescope Science Institute

Left: Image of the host galaxy of SN 2011fe, the Pinwheel Galaxy (M101) taken before the supernova explosion by the Hubble Space Telescope. Right: The supernova at maximum brightness, a composite of optical data from the Las Cumbres Observatory Global Telescope Network 0.8m Byrne Observatory Telescope at the Sedgwick Reserve and (purple) hydrogen emission data from the Palomar Transient Factory.