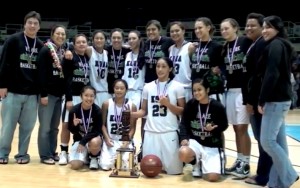 HONOLULU, Hawaii: Hawaii Island sports has in the spotlight, thanks to girls basketball teams from Konawaena and Kamehameha-Hawaii.

Both teams took the state championships in HHSAA tournament play this weekend.

The Wildcast defeated Iolani, 56-45, in the Division I state basketball championship game on Oahu.

It was capped off a perfect season for Konawaena, who went undefeated all season.

Congratulations to both teams!