The U.S. Environmental Protection Agency will be holding a public hearings in Hilo on the proposed Clean Air Act Regional Haze Federal Implementation Plan for Hawaii on June 1st. 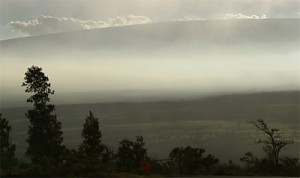 HILO, Hawaii: The U.S. Environmental Protection Agency will be holding two public hearings on the proposed Clean Air Act Regional Haze Federal Implementation Plan for Hawaii, and one of them will be held in Hilo on June 1st.

The EPA says regional haze is visibility impairment caused by the cumulative air pollutant emissions from numerous sources over a wide geographic area… of course, here on Hawaii Island, the biggest would be Kilauea volcano. However, industry and military can contribute as well.

The EPA says this haze obscures the views of scenery at a distance, reducing the beauty of national parks. The EPA plan is designed to achieve progress toward achieving visibility goals at the Haleakala National Park and the Hawaii Volcanoes National Park in the first planning period through 2018.

According to an EPA news release, the proposed plan would impose a cap on pollution from certain oil-fired electric generating units on the Big Island. The EPA says it is likely that the Hawaii Electric Light Company could meet this cap through improvements in energy conservation and increased reliance on renewable energy already planned as part of Hawaii’s Clean Energy Initiative. The EPA is not planning to impose any other additional pollution controls as part of this stage of the Regional Haze Program.

From an EPA Fact Sheet:

The plan proposes a cap on pollution from the Kanoelehua Hill Generating Station, Shipman Power Plant and the Puna Power Plant on the Big Island. It is likely that the cap could be met through energy conservation and increased reliance on renewable energy already planned as part of Hawaii’s Clean Energy Initiative.

The proposed plan for Hawaii is available on this EPA website.

The open house meeting scheduled for Hilo is for the purpose of providing additional information and informal discussion of the proposed plan, and will be followed by a public hearing. It will be held at the Waiakea High School Cafeteria starting at 4:30 pm… the hearing begins at 5:30.