VIDEO: Hunters speak out against plan to fence Ka’u Forest

It was a heated public meeting in Naalehu on Saturday, as hunters from across the island lashed out at a plan to manage the 61,641-acre Ka‘ū Forest Reserve. 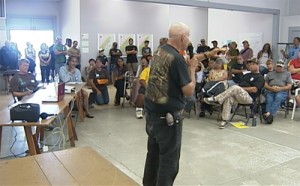 Local hunters voice their concerns at a public hearing in Naalehu

NAALEHU, Hawaii: It was a heated public meeting in Naalehu on Saturday, as hunters from across the island converged on a meeting at the community center about a plan to manage the 61,641-acre Ka‘ū Forest Reserve.

At issue is the construction of construction of a 12,000 acre fence, described in the Draft Environmental Assessment that lays out a management plan, in order to remove ungulates and protect the native forest.

Hunters see it as another attempt by the Department of Land and Natural Resources to limit access to the forest, and others consider it an outright assault on their culture.

Part of the plan is to reintroduce the alala – or Hawaiian Crow – to the forest. The alala is no longer found in the wild.

Nohea Ka‘awa, an outreach specialist with the DLNR Division of Forestry and Wildlife, told the audience that it an important endeavor.

Planners detailed the involvement of local kupuna in the initial stages of crafting the plan… but the hunters were not impressed by the consultation process.

The draft EA will be available for review and comment until June 22.