VIDEO: Kona Slack Key Fest is all in the fingers 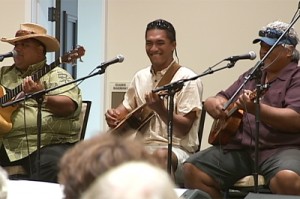 KEAUHOU, Hawaii: Kona was treated to a great line-up of ki-ho`alu at the Sheraton Kona convention center on Sunday, during the 20th annual Hawaiian Slack key Guitar Festival.

Later, the music of Bulla Kailiwai and his falsetto melodies drew the applause the audience.

Also taking the stage, a young virtuoso from Kalapana, Ikaika Marzo. We spoke to Marzo after his powerful set.

The crowd was brought to its feet by Marzo’s rendition of the classic “Mauna Loa Slack Key”,  a sound mastered by another Kalapana ki-ho’alu king, Ledward Kaapana. Which begs the question… whats about Kalapana produces so many slack key masters?

The event also helps benefit the Ki-Ho Alu Foundation, a 501 (C)(3) organization that was established in September 2004 to help promote and perpetuate Hawaiian Slack key Music. This year makes the 30th annual Hawaii Slack Key Guitar Festival on Oahu produced by KaHoku Productions, which as always is a FREE event.