Video by David Corrigan | Voice of Stephanie Salazar HILO, Hawaii: How do people on Hawaii Island memorialize September 11th? If you are Gene Tamashiro, you create an “unauthorized” People’s Organic Garden at the base of Hilo’s landmark Statue of Kamehameha the Great. This small group intended to plant these staples of island culture – […] 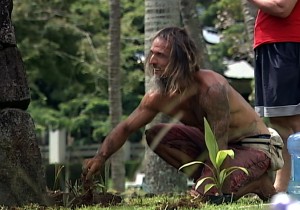 If you are Gene Tamashiro, you create an “unauthorized” People’s Organic Garden at the base of Hilo’s landmark Statue of Kamehameha the Great.

This small group intended to plant these staples of island culture – like kalo and sweet potato – as a show of civil resistance to what they see as the massive government corruption in the United States and around the globe.

Tamashiro has led Aloha Uprisings on the anniversary of 9/11 before. In 2010, the site was the Hilo Lanes parking lot… and the message was similar to today’s.

However, there is much more going on in Hawaii that troubles Tamashiro these days. During a video interview, he spoke out against the National Defense Authorization Act, Hawaii’s newly created Public Land Development Corporation, even genetically modifed food and Monsanto in Hawaii.

And above all, Tamashiro is railing against what he sees as the illegal occupation of the Hawaiian Kingdom by the United States.

Which led to an idea by Tamashiro and his friend Robert Park.

And so on Tuesday, Aloha Uprising set up camp under King Kamehameha… as supporters dug up the earth around the statue in order to plant kalo and other organic crops.

Tamashiro says he did not have a permit to do this.

Tamashiro says he notified all the authorites about the act days before. He was told that although the park falls under the state, the statue and its platform were deeded to the Bishop Estate.

Tamashiro says the police did stop by at the start of the unauthorized planting… but no one was arrested.