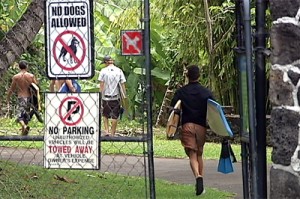 PAPAIKOU, Hawaii: It looks like the Papaikou Mill Beach access controversy is about to heat up again.

In what is sure to be a highly debated resolution, County Council Chair Dominic Yagong is seeking to seize a pedestrian public access easement through eminent domain. The path is on private property belonging to Papa‘ikou Landing, Inc., beginning at the end of Mill Road, marked by Pinky’s Store off Highway 19.

Its a well known – and hotly contested – entrance to the Mill – Papaikou’s popular Beach.

State law allows anyone to use any beach, but access is sometimes a different issue. In the case of the Mill, most users take advantage of an open manhole in a fence that leads to a path towards the relatively secluded shoreline. The path is part of the property of Charlene Prickett and her husband, James Waugh, who purchased the property in 1995. Before they owned it, it was part of the C. Brewer plantation lands.

In 2010, Big Island Video news covered a roadside rally over the pathway, after the relationship between the owners and certain members of the public soured.

It was still a hot issue months later, and was brought up frequently during the initial stages of crafting the Hamakua Community Development Plan.

Local fisherman voiced their concerns during discussions on public access, which happens to be a challenge up and down the entire Hamakua coast.

Yagong – the Hamakua district councilman – happened to be present for these initial meetings, and the complaints over the Papaikou Mill access were heard loud and clear.

The contentious issue was discussed again a month later at a community meeting dubbed “Save Papaikou Beach Access”. Once again, Councilman Yagong was present, and he suggested the crowd look into the possibilty of having the county acquire the land through the public access and open space commission process. However, the owners have not been receptive to negotiating a sale with the county.

And that brings us, years later, to a measure that will go before the Hawaii County Council for consideration a few weeks from now on October 2nd.

According to the “whereas” sections of the resolution, the public has used the paths to get to the beach at Papa‘ikou for many decades, and the document even cites old maps, saying “the 1979 County of Hawai‘i shoreline public access inventory identified an existing public access described as Mill Road to Papaikou Landing through Silverton Subdivision and private lands”

The resolution says the owners “have imposed restrictions on the use of the path, including limitation of hours, and have occasionally denied use for periods of time,” and the owners “could place additional limits, or deny access altogether.”

The resolution goes on to say that the owners also claim ownership of Mill Road “through a quitclaim deed, although owners of lots within the Silverton Camp have easements over Mill Road in their deeds, and one condition of the original subdivisions allowing the private purchase of the lots in Silverton Camp in 1952, Subdivision Numbers 566-569, was that the lot purchasers were supposed to receive undivided interests in the Mill Road”

Another “whereas” cites the Highways Act of 1892, which could be used to establish a public right to overland access to the beach, but would likely require costly litigation.

Yagong’s resolution says the acquisition would reduce conflict between the private landowner and community, and that people are ready to assist in the maintenance and management of a public access easement.

Over 5,000 residents of the island of Hawaii have reportedly signed petitions calling for public access to the beach at Papaikou.

The public – for or against – will have a chance to let the councilman know what they think on Friday, when a community meeting will be held at the Papaikou Gymnasium beginning at 6:00pm.