Video courtesy Hawaii News Now, File Video by Daryl Lee & David Corrigan | Voice of Stephanie Salazar HAWAII ISLAND: Ziplines and canopy tours in Hawaii do not need state regulation. Thats the finding detailed in a recent report from the state Office of the Auditor. Asked to do the study by way of a […] 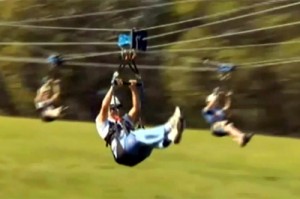 A new zipline audit finds no state regulation needed - or even possible.

HAWAII ISLAND: Ziplines and canopy tours in Hawaii do not need state regulation.

Thats the finding detailed in a recent report from the state Office of the Auditor.

Asked to do the study by way of a State Legislative resolution, the auditor took a look at Senate Bill 2433, which would require annual inspections performed by state elevator inspectors or private inspectors certiﬁed by the Department of Labor and Industrial Relations.

After an evaluation, the auditor found that the Labor Department is not capable of handling another inspection program. It also states that the industry is basically and effectively self-regulating, because of the mandatory annual inspections done by the industry’s insurance agencies.

State Auditor Marion Higa suggests that a voluntary adventure experience like ziplining does not call for such strict oversight.

There are currently 22 ziplines and canopy tours throughout the state of Hawaii. Of those, nine are on Hawai‘i island… the most of any island. They are Big Island Eco Adventures, Hawai‘i Zipline Tours, LLC, Hawai‘i Forest & Trails, Honoli‘i Mountain Outpost, KapohoKine Adventures, Kohala Zipline, The Umauma Experience, Pa‘ani Ranch, and World Botanical Gardens.

Last September, a fatal accident during construction work at Honolii Mountain Outpost sent the industry into a tailspin.

36-year-old Ted Callaway from Maui died, and another man critically injured, when a tower collapsed at the site. A state investigation asserted that the Maui-based professional zipline building company working on the course failed to take reasonable precautions to assure that the ground anchors could support the load from the tower, cables and rider. Tony DeLellis, co-owner of the company that booked zipline tours at the site, was shaken by the experience.

In a troubling statement, the state said their investigation raised “serious concerns about the stability of structures that rely on ground anchors for support, including zip line towers at other locations on the island.”

Concerns over regulation soon followed, especially in light of the fact that the practises at these so called “challenge courses” are not overseen by the government.

But the auditor says in its report that if the Senate zipline regulation bill were to be passed “it may create a false sense of safety for the public and raise the potential for liability to the State.”

The report says the Department of Labor and Industrial Relations has a multi-year inspection backlog of 5,000 elevators and is not inspecting attractions that fall under its jurisdiction for amusement rides.

The department says it would need an additional hundreds of thousands of dollars each year to create and maintain a self-sufﬁcient inspection and permitting program… meaning it would have to charge zipline operators an initial licensing fee of $18,000, as well as an annual fee of $15,000 to just cover the cost.

And the inspections are already being done by folks who have the know-how.

The auditor found that all 22 canopy tour businesses are required by their insurance agencies to provide annual inspection reports by insurer-accredited companies; companies that are designated under industry standards as qualiﬁed challenge course professionals.

Lawmakers seemed satisfied with the findings. In a letter reacting to the report, the Director of the state labor department, Dwight Takamine – the one time senator serving Hamakua where half the Big Island’s zipline attractions operate – said he concurs with the analysis.