Video courtesy UH-Hilo, Voice of Stephanie Salazar WAIMEA, Hawaii: An innovative “Veteran to Farmer” initiative is one of the programs that officials hope will compliment a large Waimea agricultural project underway. Hawaii Governor Neil Abercrombie and other dignitaries paid a special visit to the area for the Homestead Farm Tour last week. The purpose of the gathering […] 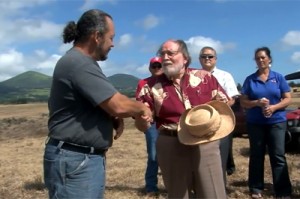 WAIMEA, Hawaii: An innovative “Veteran to Farmer” initiative is one of the programs that officials hope will compliment a large Waimea agricultural project underway.

Hawaii Governor Neil Abercrombie and other dignitaries paid a special visit to the area for the Homestead Farm Tour last week.

The purpose of the gathering was to bring together many of the stakeholders and facilitators involved in the Waimea Nui Regional Community Development Initiative, a grassroots project involving community groups, Native Hawaiian leaders, and county, state and federal government.

“I initially started farming for stress release,” Hodson said. “Today, I have 45 two thousand square foot greenhouses over the past five years. Its a family operated business. We grow it all natural, in the soil.”

The governor was excited to be a part of the project. “The Big Island,” said Abercrombie, “is going to be the generator of the prosperity for that this part of the twenty-first century, there is not a doubt in my mind.”

Hodson says he hopes this helps spread the knowledge of farming to lessees – things like building affordable greenhouses, and getting the produce to market.

A key goal of the program is to enable veterans to develop the necessary skills to farm while also addressing the difficulties many face in transitioning back to civilian life after military service. Completion of the program can enable veterans to create new farm businesses, and to meet the requirements to acquire the leases and loans needed to start a farm. Some participants who complete the certificate program will be ready to pursue a bachelor’s degree at UH Hilo in addition to becoming farmers.

The farming is just one aspect of the Waimea Nui Regional Community & Economic Development Program.

The Waimea Nui Region covers in excess of 27,000 acres of Homestead Lands on which 536 leases have been awarded. The Homestead is part of the Waimea Community which has a population of about 14,000 people of which roughly 40% are of Hawaiian decent, according to Homestead Association numbers.

“Im up to here with having to listen to people talk when they don’t have anything to say when it comes to agriculture. I don’t want to hear one more person get up and tell me – who lives on a house on a hill someplace, and wouldn’t know a tomato plant from a turkey – let alone grow one or raise one – to tell me how they want to preserve ag land. I dont want to preserve ag land. I want to use ag land to grow things and to see to it that we have a thriving agricultural industry. So, if you got a plan to actually make agriculture work in Hawaii, I’m all ears. But if you want to sit there and talk about making ag land into a museum piece, go see Bishop Museum and maybe they got a project for you.”