Video By David Corrigan, voice of Stephanie Salazar HILO, Hawaii: Behind the scenes, at the staging area of the Veterans Day parade in Hilo, military and civilian organizations alike swarm around the Kamehameha Statue, putting last minute finishing touches on floats and cars. Tents go up, and cadets get a little more practice in, before […] 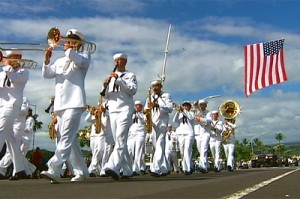 HILO, Hawaii: Behind the scenes, at the staging area of the Veterans Day parade in Hilo, military and civilian organizations alike swarm around the Kamehameha Statue, putting last minute finishing touches on floats and cars. Tents go up, and cadets get a little more practice in, before its time to step off.

Honoring the fighting men and women of the United States military, the parade route made its way from Wailoa park, up Pauahi to Kialuea, then to Waianuenue to Kamehameha, where a huge, American flag greeted participants.

A loud motorcade heralded the coming units. At the front, grand marshal of the parade, Pohakuloa commander Lt. Col. Eric P. Shwedo. We are told he was a last minute addition to the line-up.

Some of whom we spoke to at the staging area before the start of the event… like Walter Hughes, a Keaau resident who was flew the B-24 in World War II… and experience Hughes sums up as “terrifying”.

Behind the scenes we found not only warriors… but entertainers… who have made deep committments to honoring the veterans, as well.

As it always is following an election year, the parade is serves as one of the first public appearances of the many new elected officials.

Mitch Roth, the new county prosecutor-elect, was front and center.

This was our first time speaking to Roth since his dramatic, come from behind victory against candidate Lincoln Ashida on election night. Ashida was the top vote-getter in the primary, but Roth pulled off the surprise on general election night.

Ilagan will be the youngest councilmember in county history, and that’s not all… he is also a veteran.

Ilagan wasn’t the only veteran turned politician making an appearance on Saturday. Hawaii’s new U.S. Congresswoman Tulsi Gabbard was in Hilo, too.

On Veteran’s Day, Gabbard made good use of the new age of communication, releasing a number of videos to YouTube, including this statement in honor of the country’s heroes.

We caught up with one of the long time co-organizers of the parade, Wendell Kaehuauea… here he is exiting a military Humvee in front of the big tent on the highway.

Wendell usually films the parade, but now that he has retired from providing video service at Na Leo o Hawaii public television, he is free to participate in the parade.

Big Island Video News would like to join the chorus in honor of our country’s brave veterans… and say mahalo for all that they have done.