Media release by Hawaii Office of the Governor HONOLULU – In conjunction with “Hawaii Pollinator Week,” which recognizes the role of honeybees and other primary pollinators as essential to many agricultural and horticultural operations, Gov. Neil Abercrombie today signed Senate Bill 482 into law to ensure the continued viability of honeybee operations in the state. […] 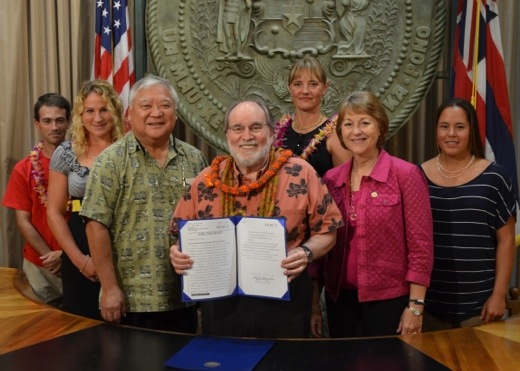 Media release by Hawaii Office of the Governor

HONOLULU – In conjunction with “Hawaii Pollinator Week,” which recognizes the role of honeybees and other primary pollinators as essential to many agricultural and horticultural operations, Gov. Neil Abercrombie today signed Senate Bill 482 into law to ensure the continued viability of honeybee operations in the state.

“We must encourage beekeeping operations of all sizes to ensure that honeybee stocks thrive in both managed apiaries and the wild, especially as bee populations have declined due to disease and invasive predators,” Gov. Abercrombie said. “SB482 will make beekeeping more financially viable for beekeepers to legally extract, bottle and sell honey by minimizing unnecessary administrative and bureaucratic requirements in ways that will not affect public safety.”

SB482, enacted today as Act 131, clarifies the maximum number of gallons of honey that can be sold by a certified honey house or food processing establishment without obtaining a permit from the state Department of Health (DOH). The measure also exempts from permit requirement sales of honey directly to retail stores that, in turn, sell the honey directly to consumers. In addition, the act provides for consumer protections by requiring honey producers to include appropriate labeling of each container of honey, take a food safety class, and make records available to DOH.

“Many small beekeepers have been unable to successfully navigate current regulatory hurdles required to operate a certified food-processing establishment on their own premises for the extraction and bottling of honey, which has resulting in many giving up beekeeping entirely,” said Hawaii Board of Agriculture Chairperson Russell S. Kokubun. “SB482 provides needed clarification to state law and greater flexibility to Hawaii’s honeybee farmers as not only a growing facet of our local agriculture industry but also a fundamental part of the long-term sustainability of the industry and the protection of our native habitats.”

After signing the bill, Gov. Abercrombie officially proclaimed June 17 through 23 “Hawaii Pollinator Week” to recognize the vital role of bees, birds, butterflies, bats and beetles in maintaining healthy, diverse ecosystems and productive farms in Hawaii and elsewhere throughout the world. Through the observance, all citizens are encouraged to be mindful of the habitats and public lands, such as forests and grasslands, and the conservation assistance provided by the State of Hawaii to promote wise conservation stewardship, including the protection and maintenance of pollinators.

Pollinator Week was first designated by the U.S. Senate and U.S. Department of Agriculture in June of 2007 and has been promoted annually by the Pollinator Partnership to address the urgent issue of declining pollinator populations. Varroa mites, small hive beetles, and nosema have decimated honeybee populations on the continental United States and recently throughout Hawaii.