PAHALA, Hawaii – Three years after it officially began broadcasting in Ka’u, KAHU 91.7 FM has officially turned the radio station over to Hawaii Public Radio of Honolulu. On August 5th, KAHU – the only Native Hawaiian owned and operated community radio station – filed a Transfer of Ownership with the Federal Communications Commission after […] 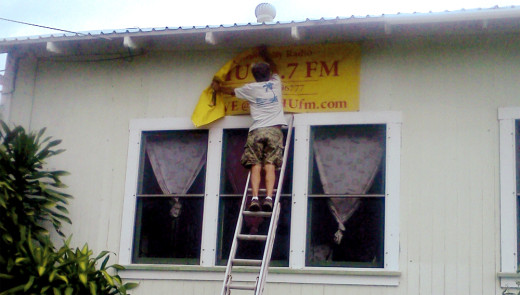 Mike McDonough, a local Pahala resident, assists in taking down the KAHU 91.7 FM station banner from the side of the building (June 2013, courest KAHU Radio)

PAHALA, Hawaii – Three years after it officially began broadcasting in Ka’u, KAHU 91.7 FM has officially turned the radio station over to Hawaii Public Radio of Honolulu.

On August 5th, KAHU – the only Native Hawaiian owned and operated community radio station – filed a Transfer of Ownership with the Federal Communications Commission after a 30-day waiting period. HPR purchased the call letters and license for KAHU 91.7 FM, reportedly paying $20,000 on closing. The FCC approved the transfer on August 6th.

“This consummates a bittersweet ending to what was an unprecedented beginning for the District of Ka’u to have its own radio station,” said Christine Kaehuaea in the media release. “Unfortunately, the community radio station format met with too many regulations and restrictions in an economically challenged area thus preventing the venture from being financially self-sustaining. With HPR not wanting to see this community returned to radio silence, they presented a way for the heart of KAHU to remain as a guiding light which was the original foundation of the station from the beginning.”

Christine is the daughter of Wendell Kaehuaea, who founded the station. Although Wendell was active in the daily operation of the station early on, he distanced himself towards the end. Wendell was at the forefront of an aggressive expansion that enlarged the station’s broadcast range from just Pahala to almost all of Ka’u. But at the end of last year, the station began to downsize. On December 12, 2012 KAHU dismantled its last existing tower site in Naalehu.

The transfer means local programming at the station will probably cease for now. Mike Titterton, CEO of Hawaii Public Radio, told Julia Neal of the Ka’U Calendar that local programming is a hopeful part of HPR’s long term plans – maybe in 5 to 10 years.

Neal was involved in the station’s programming early on, providing news updates over the air. Neal reported in July on the Ka’u Calendar News blog:

KAHU 91.7 FM’s official on-air date was June 28, 2010. It was welcomed into the community with much fanfare. Until KAHU came along, the radio dial was silent – from the Ka’u dessert on the west side of Hawaii Volcanoes National Park all the way around the southern end of the Big Island into South Kona.

For that reason, the station served an important role in emergency situations. They kept the community informed during the March 2011 earthquake that sent a tsunami crashing into Japan and caused damage in Kona, as well as the October 2012 tsunami scare following a quake off British Columbia. The station was the recipient of grant money from Civil Defense, with the intention that it would expand the state’s alert capabilities in the remote region. $76,000 was awarded to the station in 2011.

The station’s emergency alert services were put to the test in July 2012, when a 5,600 acre brush fire threatened Pahala. According to the media release, the station was the first media on-scene with police and fire to acquire reports about the fire, road closures, detours and evacuations and relay that information to a live announcer in their studio providing instant status to listeners.