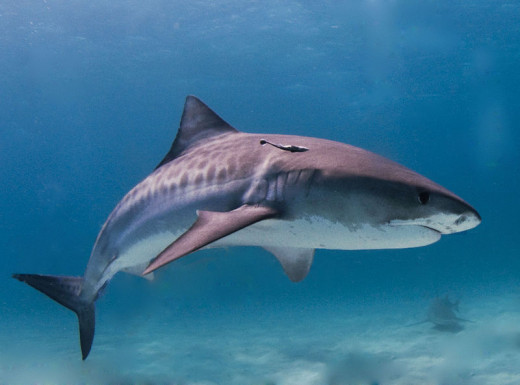 photo by Albert Kok, via Wikipedia.org

HONOLULU, Hawaii – The Department of Land and Natural Resources (DLNR) is initiating a study of tiger shark movements in island waters.

“DLNR is paying close attention to the recent series of shark incidents statewide,” said William Aila, DLNR chairperson. “These appear to be random events involving sharks of different species and different sizes. There’s nothing we can yet discern that connects the incidents or provides any sort of explanation.”

In 2013, there have been eight incidents, including four within the last month. Four of this year’s incidents occurred on Maui, three on the Big Island, and one on Oahu.

In 2012, there were 10 confirmed, unprovoked shark incidents*, the highest number ever recorded. Six of last year’s 10 incidents occurred on Maui. At the time, Aila convened a meeting of shark experts and public safety personnel, similar to the Shark Task Force of the 1990s that guided shark management decisions at that time.

At last year’s meeting, Aila asked University of Hawaii researchers to submit a proposal to specifically study tiger shark movements around Maui and see how their behavior compares with known movement patterns around the other main Hawaiian Islands. The results will help determine whether any management options should be considered. The study, led by Dr. Carl Meyer, will begin next month at a cost of $186,000 over two years.

Aila noted: “As we look at numbers of incidents per year over the last two decades or so, we see a lot of variation from year to year, including years with no incidents or just one incident. Recently, there’s been an average of about three or four incidents per year. But every few years there’s a little spike, and we’ve now seen an unprecedented spike.”

These spikes in activity occur worldwide. In recent years, West Australia, Reunion Island, Egypt, Brazil, and other locations have seen their own versions of increased shark incident activity, many of them fatal. In some cases, human behavior — such as introduction of shark attractants into the water — has been considered a contributing factor. In other cases, no change in environmental conditions or other possible factors could be identified.

“Historically, October through December are the months when the rate of shark incidents increases,” Aila added. “This is part of traditional Hawaiian knowledge, reinforced by our own statistics. So we urge people to be extra cautious, and follow our suggestions for reducing the chances of being bit (SEE BOX).

“Remember that sharks play an important role in marine ecosystems, and the ocean is their home. We’re the visitors. Going into the ocean is a wilderness experience. There are animals out there that can hurt you. The chances of something like that happening are incredibly small, given how many people are in the water every day. There are precautions you can take to make those chances even smaller.”