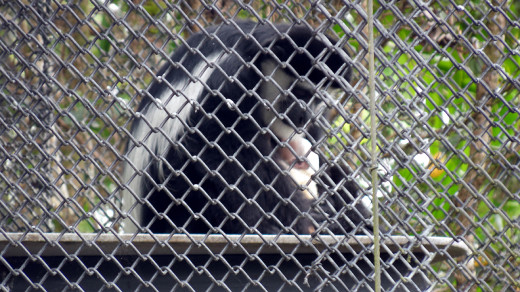 HILO, Hawaii – A black-and-white colobus monkey was born at the Pana‘ewa Rainforest Zoo and Gardens on August 10, marking the first successful birth of the species at the zoo in more than two decades.

Black-and-white colobus monkeys, Colobus guereza, are native to Africa’s equatorial forests, where they live in territorial groups ruled by a patriarch. They are herbivores, eating leaves, fruit, flowers and twigs.

After many years without a colobus monkey, the zoo added a male in June 2009. The nonprofit Friends of the Zoo purchased Mo first and then acquired Mindy from the same Florida source in April 2012. It was hoped that the pair would mate, adding to the population of approximately 200 colobus monkeys living in zoos throughout the world.

“We’re delighted with the birth and happy to introduce the newborn to the public,” said Pam Mizuno, manager of the Pana‘ewa Recreation Complex that includes an equestrian center.

The all-white baby monkey has not yet been named, and its gender remains undetermined, she said. The baby and its parents are on public display during operating hours of 9 a.m. to 4 p.m. daily. Admission is free.

Located off of Stainback Highway about five miles south of Hilo, the 12-acre Pana‘ewa Rainforest Zoo and Gardens is the only natural tropical rainforest zoo in the United States. More than 100 palm varieties and 80 animal species, including Nēnē goose and Namasté, a white Bengal tiger, can be found at the zoo.