HILO, Hawaii – The future of the Daniel K. Inouye College of Pharmacy at the University of Hawaii-Hilo was discussed at the state legislature a few weeks ago, and the talk proved revealing. The joint informational hearing involved the House and Senate Committees on Higher Education. The purpose was to discuss the Fiscal Year 2014-2015 University […]

HILO, Hawaii – The future of the Daniel K. Inouye College of Pharmacy at the University of Hawaii-Hilo was discussed at the state legislature a few weeks ago, and the talk proved revealing.

The joint informational hearing involved the House and Senate Committees on Higher Education. The purpose was to discuss the Fiscal Year 2014-2015 University of Hawaii System Supplemental Budget which was approved by the Board of Regents on October 17, 2013.

The chancellor of UH-Hilo, Dr. Donald Straney, spent most of his time before the joint committee answering questions about the College of Pharmacy, which last year failed to find any funding at the legislature for a planned building in Hilo that would consolidate operations. The new building would allow the college to meet its last, unfulfilled requirement for its existing accreditation.

Straney detailed the accreditation process for the lawmakers, and also how the design for the building has been pared down from the original $66 million vision in the hopes of getting the funding it needs from the legislature.

Representative Isaac W. Choy, serving Oahu’s House District 23, is the chair of the House Committee on Higher Education. He asked most of the questions during the December 20 briefing.

Dr. Straney: The accreditation is in jeopardy.

Rep. Choy: So we have to do something by when?

Rep. Choy: So, if you don’t get any funding are you going to stop the program?

Dr. Straney: I don’t think we’ve begun planning for not getting the building.

Rep. Choy: But you should, right? As a manager?

Rep. Choy: As a manger. There is a formal process under the accreditation rules about stopping admissions, teaching out, that would be a three year process….

That of course would have declining tuition income.. and I should mention that the College of Pharmacy unlike almost any other program in the system … is funded almost entirely on its tuition. Only 11% of its budget comes from general funds.

Straney denied the rumor that there was a plan to rent space to pharmaceutical companies to offset costs.

At times, Rep. Choy’s questions seemed to reflect the sentiment of the House, which disagreed with the Senate during last legislative session and stood against funding the building during budget talks.

Rep. Choy: There was an objection that the pharmacy school really belongs on Kaka’ako. What are your comments to that?

Dr. Straney: I wasn’t here when the college was founded but if you look at the board of regents meeting minutes when it was, the arguments that were presented explicitly stated in there that the intention of the university was to establish the college in a rural setting because of the need to develop rural health care expertise and pharmacists provide that.

Pharmacists are the only medical professionals that you can see without an appointment, and many people get front line medical advice from their pharmacist. Often about how to balance their medications which is one of the leading reasons why people get admitted to the hospital; because people didn’t do the medications right.

But Choy seemed to have another idea – “a little bit different, a little bit out of the box” as he put it – for funding the building. Early in the Q&A, Choy asked Straney to share with the lawmakers their previous discussions about how the financing could be structured so that the pharmacy building (and the entire college) might be covered with revenue bonds that the college could pay from its tuition income. 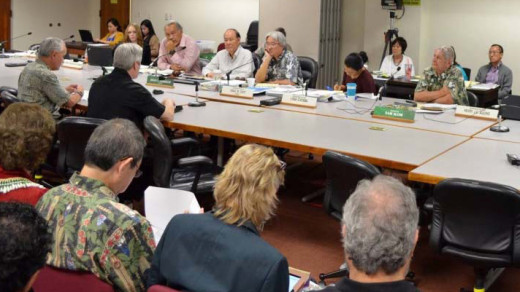 Sen. Gil Kahele, the Vice Chair of the Senate Committee on Higher Education who also represents the Hilo district where the college is located, eventually asked the state finance director, Kalbert Young, to explain where the building falls on the governor’s budget priority list.

Kalbert Young: In terms of CIP projects, I would probably classify the UH Hilo as – if not the top priority CIP – its one of the most foremost CIP projects reflected in the administartions proposed budget.”