The Mokupāpapa Discovery Center will be re-introduced to Hilo this weekend, as the educational center unveils its new 20,000 square foot facility to the public.

HILO, Hawaii – The Mokupāpapa Discovery Center will be re-introduced to Hilo this weekend, as the educational center unveils its new 20,000 square foot facility to the public.

Designed to showcase the marine environment and the culture and history of the remote Northwestern Hawaiian Islands, the center will reopen its doors in the historic Koehnen’s building after nearly a year of refurbishing.

Big Island Video News got a sneak peak of the new space right before the grand re-opening. Andy Collins, Papahānaumokuākea Marine National Monument education coordinator, pointed out some of the highlights. Also, a special reception was held Friday evening. 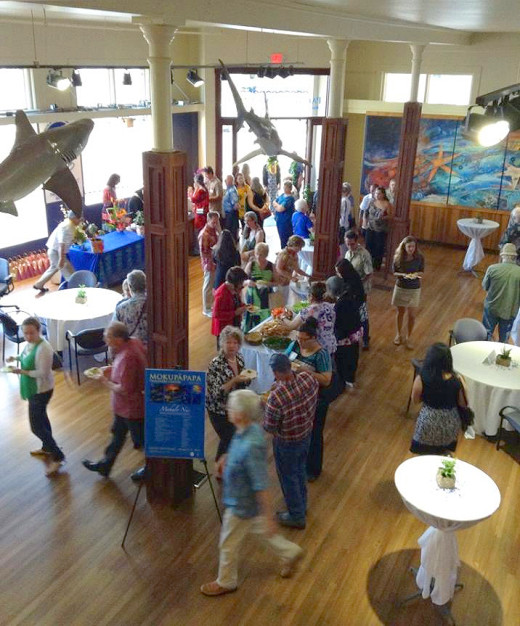 The re-opening celebration on Saturday, March 15th is free and open to the public from 10 a.m. to 4 p.m.

This is from a press release we received on the big move last year:

Mokupāpapa has hosted more than 60,000 visitors per year – including school groups, community groups, locals and tourists alike; to date, more than half a million people have walked through the center’s doors. Mokupāpapa has served as a physical hub of learning for both children and adults, hosting well-attended monthly educational talks, summer programs and outreach activities, while drawing a constant stream of school and community groups from around the state and beyond.

Fred Koehnen, company president and a second generation Hilo resident, said his family wanted to give back to the community and believes in the potential of a new and expanded discovery center.

“Conservation and education are important to the future, and that is why we are working with NOAA to make this happen,” Koehnen said. “Mokupāpapa has been a positive influence in downtown Hilo and we are excited about future possibilities.”

Since most people will never have the opportunity to visit these remote islands, the modest 4,000-square-foot Mokupāpapa Discovery Center was conceived to “bring the place to the people” and spur greater public awareness of the region and ocean conservation issues more generally. NOAA media release from April 2013