Video by David Corrigan, Voice of Stephanie Salazar WAIMEA, Hawaii – There’s been a lot of talk about Hawaii Island’s energy future ever since Parker Ranch’s Paniolo Power presentation in Waimea last Thursday. On Friday, we featured the full presentation, and now we have some interesting clips from the public question and answer session that […]

On Friday, we featured the full presentation, and now we have some interesting clips from the public question and answer session that followed. 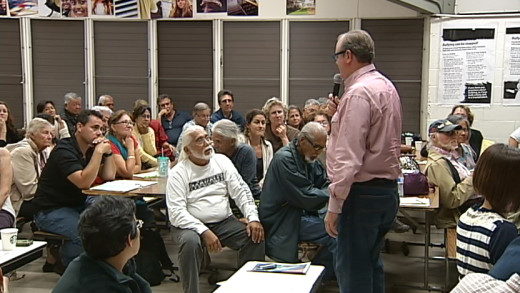 (:35) What does Dutch see as the most difficult step in this battle? Senator Malama Solomon says politics. Kuyper says having a world class plan and community that wants it will mean a lot.

(2:10) Kailapa resident Roger Kanealii asks if the area under consideration includes Kawaihae (Kuyper says it does) and then he asks if Paniolo Power’s transmission lines – if any were to be constructed – would be overhead or underground.

(3:00) What can the community do to help? What kind of time frame? Kuyper says the critical piece is getting an operating partner and capital partner who understands the need for advocacy.

(4:20) Realistic time frame? Kuyper will get back in six months with an answer to that.

(5:45) Kuyper describes the region being considered.