HONOLULU, Hawaii – It was a busy day at the state legislature on Tuesday. The State House of Representatives passed more than 150 Senate bills during their session. (House majority media release below.) Pono Choices During the lengthy session, Representative Bob McDermott tried to get a floor amendment passed dealing with some of the material […] 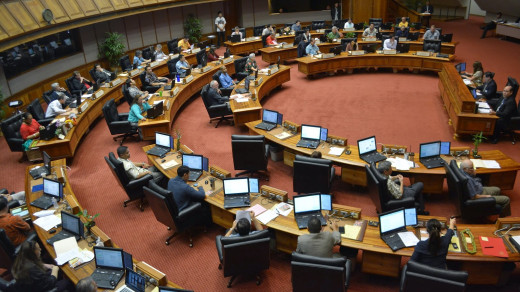 HONOLULU, Hawaii – It was a busy day at the state legislature on Tuesday. The State House of Representatives passed more than 150 Senate bills during their session. (House majority media release below.)

During the lengthy session, Representative Bob McDermott tried to get a floor amendment passed dealing with some of the material being taught in the Department of Eduction’s Pono Choices curriculum for eleven to thirteen year-old children.

SB2288 SD2 HD1 amends or repeals various provisions of Chapter 302A, Hawaii Revised Statutes, governing the Department of Education, for housekeeping and other purposes. McDermott’s amendments read, in part:

The legislature finds that the department of education is utilizing “Pono Choices”, a medically questionable and age-inappropriate curriculum for children aged eleven to thirteen years old. The materials contradict definitions found in medical dictionaries, the statistics from the Centers for Disease Control and Prevention, and a clear warning from the Food and Drug Administration. The materials also encourage sexual behavior among children who are too young to legally consent to sexual intercourse. Ironically, while the curriculum introduces children to risky sexual behavior, it fails to fully inform those same children of those risks.from AMENDMENT TO: S.B. No. 2288 S.D. 2 H.D. 1

The bill passed, although some legislators had reservations over privacy.

A lot of time was spent discussing Senate Bill 3121, relating to public land exchange. The measure would change the law to require approval for any exchange of public land for private land by majority vote of both houses of the legislature rather than the current requirement of disapproval by two thirds vote.

Hawaii Island Rep. Cindy Evans, who co-sponsered the House companion bill that was held back in January, argued in favor of the measure.

There was also an important vote on funding for a little fire ant pilot project, as the state hopes to get ahead of the invasive problem. Again, Representatives Gene Ward and Cindy Evans did most of the talking on SB2920 SD2 HD1.

A bill to enable the transition of the Hawaii Health Systems Corporation towards a public private partnership also got a few comments from lawmakers. Hawaii Island representative Richard Onishi opposed the bill, and spoke on the floor of the House.

Another bill (SB2436 SD2 HD1) creating a Transit-Oriented Development Advisory Committee raised concern – and comparison to the infamous Public Land Development Corporation of a few years ago. Rep. Cindy Evans came to the defense of the measure.

Finally, a controversial bill relating to Sustainable Living Research barely squeaked by the House, with 16 no votes. It was enough to pass on third reading.

Giving reasons for their opposition, lawmakers cited testimony from the director of the Hawaii County Planning Department, Duane Kanuha, who wrote:

Furthermore, we question whether the real intent of this bill is to truly foster sustainable research and testing or to create a vehicle; the proposed sustainable living research permit, to allow the proliferation of already existing “eco villages” to be legitimatized.

We also object to the proposed inclusion of“sustainable living research sites” as permissible uses within the State Land Use Agriculture and Rural districts inasmuch as such sites cannot be determined until a sustainable living research site permit has been issued by the Planning Department according to the proposed legislation.Duane Kanuha – April 3, 2014

The majority of these bills, along with House bills passed by the Senate, will go into conference committees where House and Senate conferees will negotiate differences in the measures and determine which will be presented for final consideration.

Notable senate-originating measures passed by the House include:

SB2424, SD2, HD1 requires the state Department of Education in conjunction with other state departments and agencies to develop a master strategy for cooling all public schools facilities. Authorizes the issuance of general obligation bonds to fund projects that demonstrate efficient methods to air-condition classrooms.

SB2516, SD2, HD1 appropriates funds to the State Public Charter School Commission to support its facilities pilot project, based, in part, on the need and performance of charter schools.

SB2442, SD1, HD1 helps meet the current and projected needs for affordable housing in Hawaii by appropriating monies to the Rental Housing Trust Fund for the construction of micro units, family units, and elder housing units to be leased to individuals and families meeting certain income requirements.

SB2345, SD1, HD1 protects Hawaii’s kupuna from financial fraud and abuse by appropriating funds for the operation of the investor education and other related financial education programs targeted at kupuna within the state Department of Commerce and Consumer Affairs. Majority Package.

SB2399, SD2, HD1 authorizes the High Technology Development Corporation to establish a geriatric research and technology park that will serve the emerging elderly population and stimulate economic growth and appropriates funds for the project.

SB2629, SD1, HD1 provides greater transparency in lobbying activities by requiring persons who engage in lobbying during any special session to file a statement of expenditures with the Hawaii State Ethics Commission within 30 days after adjournment sine die of the special session.

SB2634, SD1, HD2 requires individuals who spend more than $750 on lobbying during a statement period to itemize each expenditure in certain categories.

SB2866, SD1, HD1 makes an emergency appropriation to provide funds for the functions of the Hawaii Health Systems Corporation and its regions.

SB2434, SD2, HD1 specifies additional duties for the Alzheimer’s Disease and Related Dementia Services Coordinator position in the Executive Office on Aging and appropriates funds to establish a full-time position to assist the coordinator with information and referral, counseling, education, support groups, and safety services.

SB2495, SD3, HD1 prohibits the use of electronic smoking devices in enclosed public areas and other specified locations.

SB2687, SD1, HD2 extends from two to four years after April 24, 2012, the statutory period during which victims of child sexual abuse may bring an otherwise time-barred civil action against the victim’s abuser and certain legal entities, including the State or its political subdivisions.

SB2729, SD2, HD1 amends the fine structure and amounts for violations of the prohibition against operating a motor vehicle while using a mobile electronic device in the state.

SB2308, SD1, HD1 appropriates funds to the Department of Public Safety to provide for programs and services for children of incarcerated parents and to assist with family reunification.

THE ENVIRONMENT AND INVASIVE SPECIES

SB2343, HD1 protects Hawaii’s environment and economy and the health and lifestyle of its people by appropriating funds for fiscal year 2014-15 to the state Department of Land and Natural Resources for projects undertaken in accordance with the Hawaii Invasive Species Council for prevention, control, outreach, research and planning. Majority Package.

SB2920, SD2, HD1 protects Hawaii’s environment, agriculture and economy, and the health of Hawaii’s residents and visitors from the devastating effects of invasive little fire ants by creating a pilot project to develop model strategies for controlling and eradicating the little fire ant, developing a canine detection pilot program, and implementing a statewide public awareness and education campaign.

SB3121, SD1, HD1 requires legislative approval of any exchange of public land for private land by majority vote of both houses of the Legislature.

SB3065, SD1, HD1 appropriates funds for the state Department of Budget and Finance to investigate and, if appropriate, execute an exchange of existing state land for certain parcels of land currently owned by Dole food company, Inc., that contain important watershed, forest reserve and agricultural land.

SB2110, SD2, HD1 commits and restores appropriate staffing levels so the Department of Agriculture can properly administer and regulates pesticides in accordance with the Hawaii Pesticides Law.

SB3036, SD2, HD1 addresses erosion on Oahu’s North shore by requiring the University of Hawaii Sea Grant College Program to create a North Shore Beach Management Plan for the area stretching from the Kawailoa to Waialee ahupuaa and appropriating funds for the development of the plan.

SB2175, SD2, HD2 authorizes the dean of the University of Hawaii College of Tropical Agriculture and Human Resources to establish a two-year industrial hemp phyto-remediation and biofuel research program.

SB718, SD2, HD1 supports long-term economic growth by the State by appropriating funds to the Hawaii Strategic Development Corporation to continue the HI Growth Initiative. Also, appropriates funds to perform studies and analysis relating to the establishment of one or more facilities on Hawaii Island for quarantine operations.

SB2079, SD2, HD1 amends the Motion Picture, Digital Media, and Film Production Income Tax Credit by (1) requiring a film production to comply with all applicable statutes, ordinances, rules and regulations of the federal, state, and county governments and secure all necessary film permit approvals with the appropriate state or county agency if film production takes place on state or county property; (2) prohibiting production costs that have been financed with state funds from qualifying for the tax credit beginning July 1, 2014; and (3) prohibiting reality television programs from qualifying for the tax credit.

SB2583, SD1, HD1 appropriates funds, contingent on a dollar-for-dollar match of funds by the National Aeronautics and Space Administration (NASA), for the purpose of funding an engineering assessment of the proposed venture between NASA and the Pacific International Space Center for Exploration Systems to establish a laser optical communications ground station in the state.

SB3053, SD2, HD1 appropriates funds to establish, staff and operate a Hawaii Unmanned Aerial Systems Test Site. Establishes a chief operating officer position for the test site and an advisory board to oversee and manage operations.

SB3122, SD2, HD2 authorizes the Office of Hawaii Affairs (OHA) to pursue authorization to conduct residential development and to impose association fees on certain parcels of land in the Kakaako Makai area that were transferred to OHA, as part of the settlement of claims related to public land trust revenues.

SB2953, SD1, HD3 allocates to the state Department of Hawaiian Home Lands a to be determined percent of the royalties received by the State from geothermal resources located on lands under the jurisdiction of the department.

SB1007, SD2, HD2 increases liability protections for the State and counties by extending the conclusive presumption for legally adequate warning to include dangerous non-natural conditions on unimproved lands and makes permanent the liability protections based on posting warnings signs regarding outdoor recreation on public lands by Act 82, Session Laws of Hawaii 2003.

SB2026, SD1, HD2 establishes the offense of cruelty to animals by slaughtering or trafficking pet animals for human consumption as a misdemeanor.Hawaii House of Representatives media release