Big Island Video News interviews Kale Gumapac, Dexter Kaiama and other Hawaiian Kingdom supporters outside the Hale Kaulike courthouse in Hilo following the news that the charges against Gumapac were dropped.

In an interview conducted outside the Hilo Courthouse on Friday, Gumapac and his attorney Dexter Kaiama said they had planned to go to trial that same day before hearing word that the case was dismissed without prejudice.

Gumapac made headlines last year when his refusal to pay his mortgage on his Hawaiian Paradise Park home resulted in his forceful eviction. Gumapac said he was simply following the terms of his contract, and according to he and his lawyer Dexter Kaiama, there is an inherent defect in all land title in Hawaii thanks to the overthrow of the Hawaiian Kingdom. Big Island Video News covered the case in a five part series called “Defected: Testing Hawaiian Sovereignty” (video below)

While producing the series, Big Island Video News contacted Deutsche Bank, the trustee of the mortgage, who informed us the servicer of the mortgage (the entity in charge of the foreclosure activity and the post-maintenance, sale and disposition of the property) was another company called Ocwen Loan Servicing. The very same day we gleaned that information, Big Island Video News also received – apparently by coincidence – a media release from the Office of Hawaii’s Attorney General detailing a $2.1 billion joint state-federal settlement with Ocwen for servicing misconduct (media release below.)

Gumapac says he was able to submit a claim and received a cash payment under the settlement. Gumapac was prepared to present the payment as evidence in his trial.

Gumapac and Kaiama were also prepared to call Dr. Keanu Sai and Professor Williamson Chang as expert witnesses. The work of both men was recently cited in a highly publicized letter to Secretary of State John Kerry written by Office of Hawaiian Affairs CEO Kamana’opono Crabbe (later rescinded by the OHA Board of Trustees) asking for clarification – among other things – on the continued existence of the Hawaiian Kingdom. 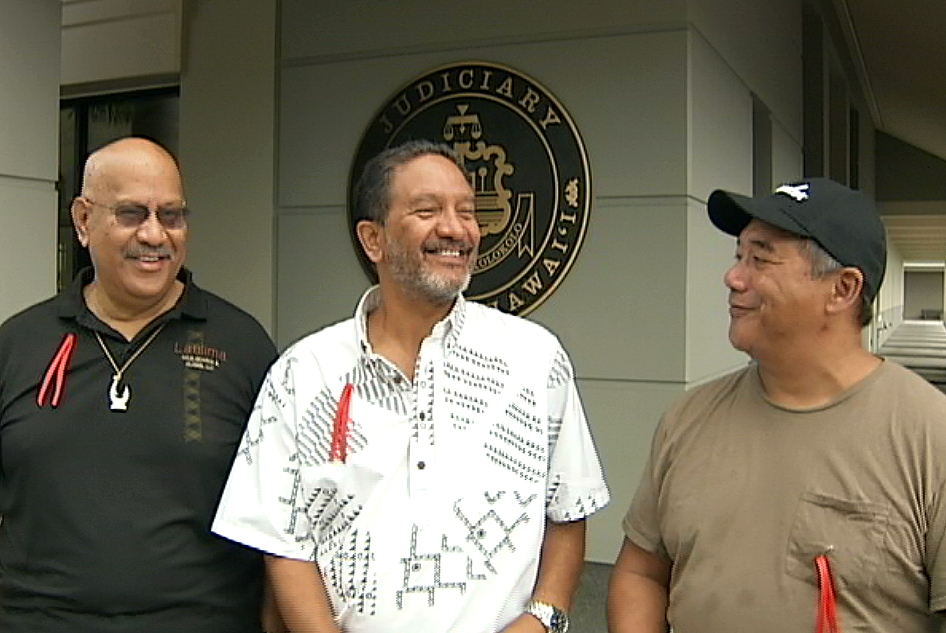 Outside the courthouse in Hilo, from left to right: Kale Gumapac, Dexter Kaiama and supporter Randy Lorenzo.

Here is the media release issued by the State of Hawaii following the settlement with Ocwen Financial Corporation. A subsidiary of Ocwen acted as the service agent in Gumapac’s foreclosure process and eviction.

“What we found in the Ocwen case is similar to a lot of the problems we saw in our other mortgage servicer enforcement cases” Attorney General Louie said. “This is part of our ongoing civil law enforcement effort to hold servicers, including Ocwen, accountable and ensure that they treat borrowers fairly.”

Under the settlement, Ocwen agreed to $2 billion in first-lien principal reduction, and $125 million for cash payments to borrowers on nearly 185,000 foreclosed loans.

In Hawaii, Ocwen will provide troubled borrowers with an estimated $24 million in first lien principal reductions, and 403 borrowers will be eligible to receive a cash payment. The payment amount, which is contingent on the number of consumers who submit valid claims, is projected to exceed $1,000 per claimant.

The proposed order, to be enforced by the Department of Commerce and Consumer Affairs’ (DCCA) Division of Financial Institutions (DFI), imposes servicing standards and homeowner protections on Ocwen. DFI has been supervising and regulating mortgage servicers since 2009.

According to a complaint filed in the U.S. District Court for the District of Columbia, Ocwen’s misconduct resulted in premature and unauthorized foreclosures, violations of homeowners’ rights and protections, and the use of false and deceptive documents and affidavits, including “robo-signing.”

The settlement with the nation’s fourth largest mortgage servicer is the result of a massive civil law enforcement investigation and initiative that includes state attorneys general, state mortgage regulators and the CFPB. Through a court order, the settlement holds Ocwen accountable for past mortgage servicing and foreclosure abuses, provides relief to homeowners, and stops future fraud and abuse by Ocwen.

Joseph A. Smith, Jr., monitor of the National Mortgage Settlement, will oversee the Ocwen agreement’s implementation and compliance through the Office of Mortgage Settlement Oversight. (For more information visit mhttps://www.mortgageoversight.com/).

The Ocwen settlement does not grant immunity from criminal offenses and would not affect criminal prosecutions. The agreement does not prevent homeowners or investors from pursuing individual, institutional or class action civil cases. The agreement also preserves the authority of state attorneys general and federal agencies to investigate and pursue other aspects of the mortgage crisis, including securities cases.

Ocwen Agreement Highlights
– Ocwen commits to $2 billion in first-lien principal reduction.
– Ocwen pays $125 million cash to borrowers associated with 183,984 foreclosed loans.
– Homeowners receive comprehensive new protections from new mortgage loan servicing and foreclosure standards.
– An independent monitor will oversee implementation of the settlement to ensure compliance.
– The government can pursue civil claims outside of the agreement, and any criminal case; borrowers and investors can pursue individual, institutional or class action cases regardless of the agreement.
– Ocwen pays $2.3 million for settlement administration costs.

The National Mortgage Settlement (for more information visit http://www.nationalmortgagesettlement.com/ ) a three-year agreement reached in 2012 with the attorneys general of 49 states and the District of Columbia, the federal government, and five mortgage servicers (Ally/GMAC, Bank of America, Citi, JPMorgan Chase and Wells Fargo), has so far provided more than $51 billion in relief to distressed homeowners and created significant new servicing standards. The U.S. District Court in Washington, D.C. entered the consent judgments on April 5, 2012.

The final agreement, through a consent judgment, will be filed in U.S. District Court in Washington, D.C. If approved by a judge, it will have the authority of a court order.

Because of the complexity of the mortgage market and this agreement, which will span a three-year period, in some cases Ocwen will contact borrowers directly regarding principal reductions. However, borrowers should contact Ocwen to obtain more information about principal reductions and whether they qualify under terms of this settlement.

More information will be made available as the settlement programs are implemented.

For more information on the agreement, visit: http://ag.hawaii.gov/www.CFPB.gov

Consumers may call Ocwen toll-free at 1-800-337-6695, or email their questions to ConsumerRelief@Ocwen.com.