The USGS said the temblor was centered 7 miles west northwest of Waimea at a depth of 9.7 miles.

(ABOVE) Image from the USGS Hawaiian Volcano Observatory earthquake information

WAIMEA, Hawaii – As Hawaii prepares for the oncoming Hurricane Iselle to make landfall sometime Thursday evening, a magnitude 4.5 earthquake has shaken the northern region of the Big Island.

The quake was felt across Kohala. The USGS said the temblor was centered 7 miles west northwest of Waimea at a depth of 9.7 miles. No damage was reported. While an earthquake of this magnitude usually has the population talking, all eyes remain on the Pacific, where two threatening storms are making their way towards the islands.

The U.S. Geological Survey’s Hawaiian Volcano Observatory (HVO) recorded a magnitude-4.5 earthquake located beneath the Island of Hawaiʻi on Thursday, August 7, at 6:24 a.m., HST. The Pacific Tsunami Warning Center has determined that no damaging tsunami was generated (http://ptwc.weather.gov/?region=2).

According to Wes Thelen, HVO’s Seismic Network Manager, this earthquake was centered about 6 km (4 mi) east-northeast of Kawaihae and 14 km (9 mi) west-northwest of Waimea, at a depth of 16.8 km (10.4 mi). A map showing its location is posted on the HVO website at http://hvo.wr.usgs.gov/seismic/volcweb/earthquakes/.

The earthquake was widely felt on the Island of Hawaiʻi. The USGS “Did you feel it?” Web site (http://earthquake.usgs.gov/eqcenter/dyfi/) received more than 145 felt reports within an hour of the earthquake. Only light shaking (Intensity IV) has been reported. Most of the felt reports were posted from the Islands of Hawai‘i and Maui. There were also a few felt reports from the Kahuku and Hickam areas on Oʻahu, over 250 km (155 mi) from the epicenter. At these shaking intensities, damage to buildings or structures is not expected.

As of 7:00 AM HST, no aftershocks of the magnitude-4.5 earthquake have been recorded.

Over the past 50 years, the area around Kawaihae has experienced 11 earthquakes greater than magnitude-4.0, including today’s event, at depths of 10–20 km (6–12 mi). Deep earthquakes in this region are most likely caused by structural adjustments within the Earth’s crust to accommodate the heavy load of Mauna Kea and surrounding volcanoes. Today’s earthquake is in the general region of the 2006 Māhukona earthquake, but is not close enough to the 2006 event to be an aftershock of it.

Today’s earthquake caused no detectable changes on the active volcanoes on the Island of Hawai`i.

The 2nd annual Great Hawaii Shakeout, scheduled for 10:16 a.m. on October 16, 2014, is an opportunity for all Hawaii residents to practice “Drop! Cover! Hold On!”—actions that are proven to reduce injury in an earthquake. For details, please visit shakeout.org/hawaii/.

For information on recent earthquakes in Hawaii and eruption updates, visit the Hawaiian Volcano Observatory website at hvo.wr.usgs.gov.USGS HVO 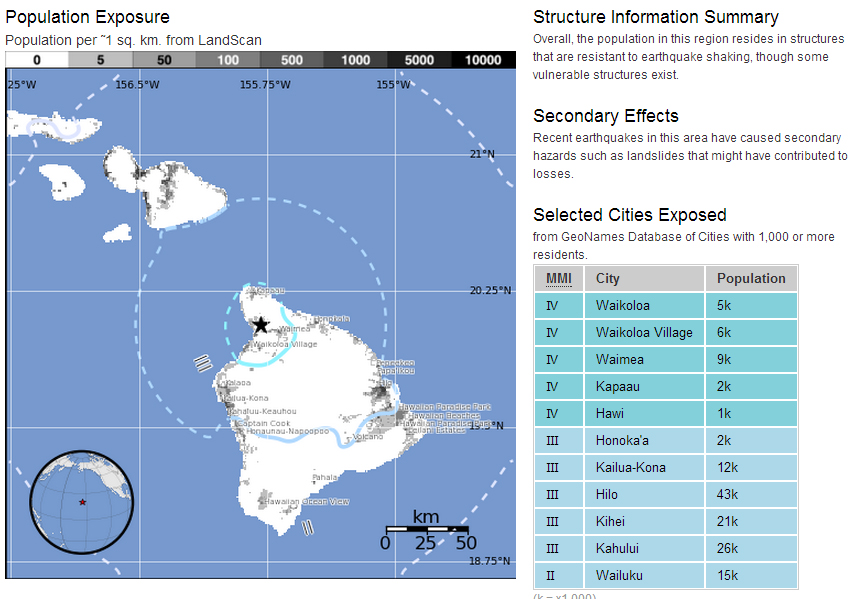