The upslope breakout has taken the lead, advancing nearly 100 feet ahead of the stalled flow front.

USGS scientists say the lava flow is not currently a “steady state system” – the volume of lava is variable and is expected to continue to be variable for the foreseeable future. That means scientists are not comfortable forecasting where the lava will be at any given time in the near future. They still believe it will follow the previously forecasted path towards Pahoa.

The Hawaiian Volcanoes Observatory handled the overflight duties today. The county helicopter was busy on a search and rescue operation. HVO also posted new maps and photos to its website. It is worth noting that the Kilauea summit inflation that began Monday evening is continuing, and Pu’u O’o has also inflated slightly over the past day. Inflation could result in a greater lava supply through the tube system, which appears to be intact based on the activity at the flow front.

The Hawaiian Volcanoes Observatory scientists conducted an over flight this morning and report that activity on the flow front and leading edge remains scattered and sluggish. The upslope breakout remains active with scattered lava activity around the perimeter and it has advanced to the northeast and is presently approximately 30 meters beyond the original flow front. The advancement of this flow remains sluggish and currently all lava flow activity does not pose an immediate threat to area communities.

The Railroad Emergency Route is NOT open to the public at this time. The public is reminded that no public vehicles, persons, or activity is allowed within the emergency route until the route is opened. The route will be opened for use upon the direction of Civil Defense in the event HWY 130 is unusable due to the lava flow.

The public is reminded that the flow is not visible and cannot be accessed from any public areas. Access to the Kaohe Homesteads subdivision will remain restricted to area residents only.Hawaii County Civil Defense on Oct. 1

The June 27th lava flow remains active. Based on observations from HVO webcams, there have been no significant changes to the flow front since yesterday. On Monday breakouts of lava were observed where the flow first enters the crack system about 8 km (5 mi) behind the stalled front, and where it exits the crack system about 3 km (2 mi) back from the front. At the leading edge of the flow, two lobes of weak surface activity were observed at 125 m (410 ft) and 580 m (1900 ft) behind the front. Both lobes were creeping northeast around the north side of the existing flow. An HVO overflight is scheduled this morning.

Puʻu ʻŌʻō Observations: There was a slight increase in ground tilt at Puʻu ʻŌʻō over the past day. Glow was visible overnight above several outgassing openings in the crater floor. The most recent sulfur-dioxide emission-rate measurement for the East Rift Zone was 550 tonnes per day (from all sources) on September 25, 2014. Seismic tremor is low and constant.

Summit Observations: Inflationary tilt that began Monday evening is continuing as of Wednesday morning. The lava level within the summit vent rose accordingly to about 50 m below the Overlook crater rim. USGS Hawaiian Volcano Observatory on Sept. 27 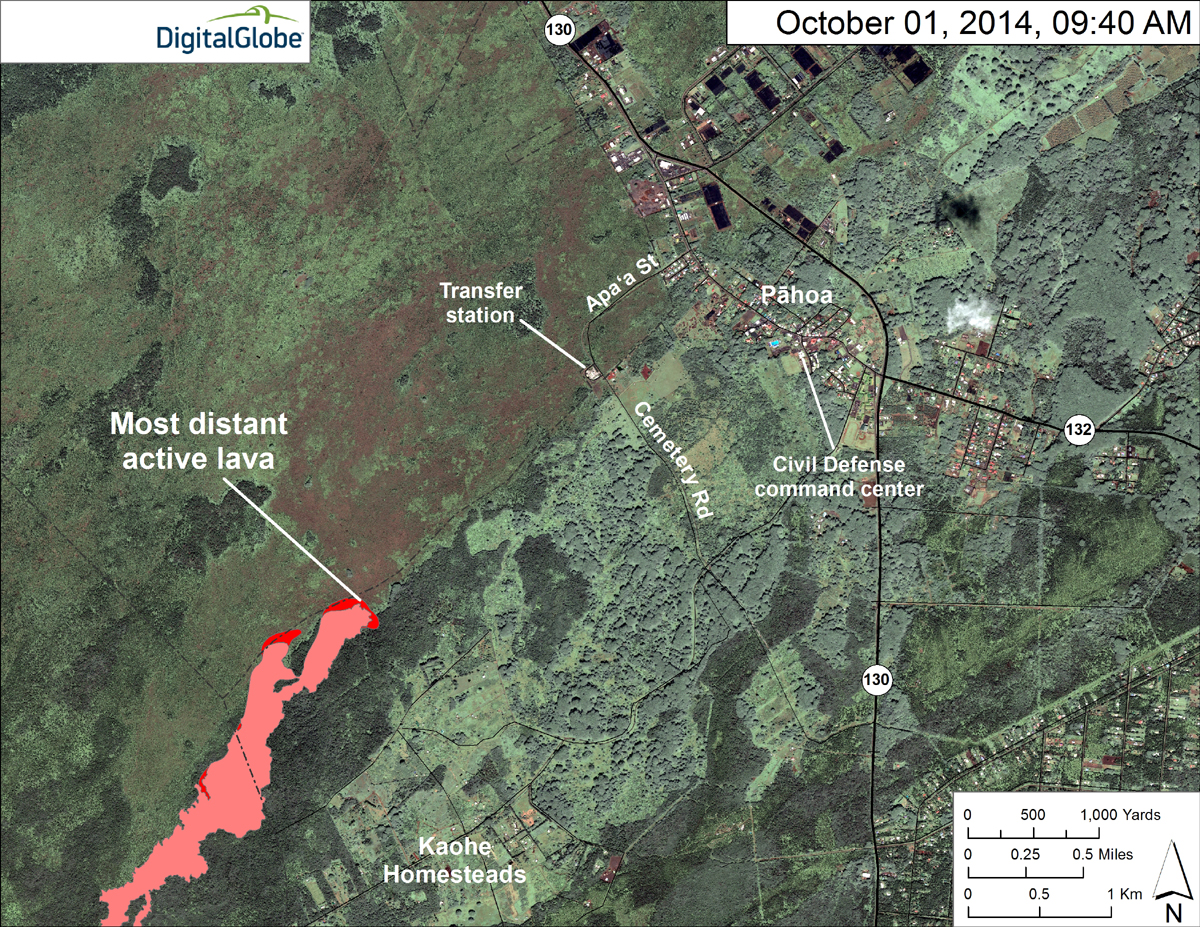 USGS HVO: This map uses a satellite image acquired in March 2014 (provided by Digital Globe) as a base to show the area around the front of the June 27th lava flow. Surface activity near the flow front was advancing slowly northeast in two lobes. The active lobe farthest from the vent (the closest to Pāhoa) has now overtaken the stalled front and extended it by about 30 m (33 yards). It traveled about 150 m (273 yards) since Monday, September 29. A second lobe was about 450 m (492 yards) back from the stalled front, and it moved only about 140 m (153 yards) since Monday. 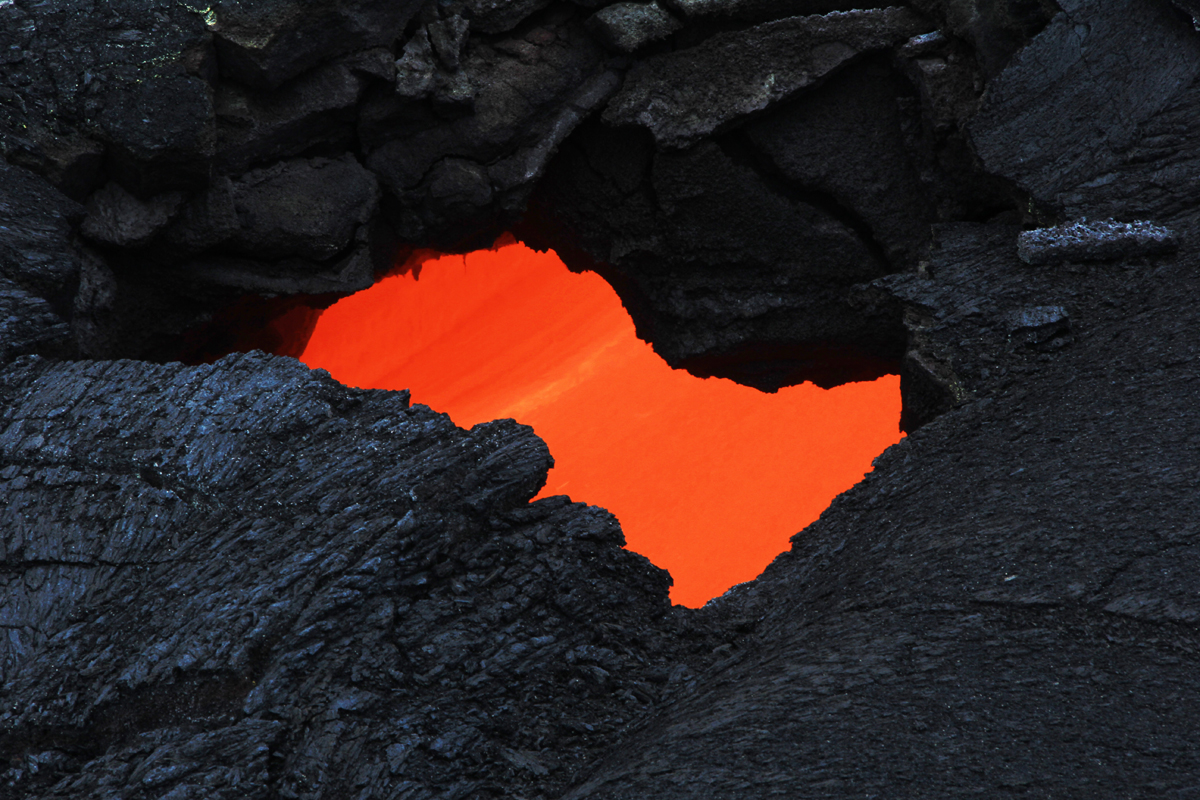 USGS HVO photo shows a skylight which provided a view of the swiftly moving lava stream in the lava tube.