The flow front remains stalled but a narrow finger has broken out and advanced approximately 30 yards.

(ABOVE PHOTO) A view of flow front taken by the USGS Hawaiian Volcano Observatory on October 17, looking downslope towards Pāhoa. The smoke plumes are created by individual breakouts burning vegetation at the flow margin.

This morning’s assessment shows that the flow front remains stalled and no advancement since yesterday. The flow remains approximately 0.6 miles from the Apa’a Street area near the Pahoa Transfer Station. A very narrow finger along the east edge of the front has broken out and advanced approximately 30 yards. This finger is located behind or in back of the flow front and is moving very slowly. There was very little burning activity and smoke conditions were light to moderate this morning.

The public is reminded that the flow is not visible and cannot be accessed from any public areas. Access to the Kaohe Homesteads subdivision will remain restricted to area residents only.Hawaii County Civil Defense on Oct. 20

A Civil Defense overflight this morning found no advancement at the front of the flow, though breakouts remain active immediately upslope. The stalled front is about 1.3 km (0.8 miles) from Apaʻa St/Cemetery Rd, as measured along the steepest-descent line that the flow has been following.

Puʻu ʻŌʻō Observations: No significant change in eruptive activity or ground tilt was recorded at Puʻu ʻŌʻō over the past 24 hours. Seismic tremor has been low and relatively constant. Glow was visible overnight above several outgassing openings in the crater floor. The most recent sulfur-dioxide emission-rate measurement for the East Rift Zone was 450 tonnes per day (from all sources) on October 9, 2014.

Summit Observations: The summit gradually deflated until late yesterday morning. After that, the summit tiltmeter recorded only tiny fluctuations indicating no significant inflation or deflation. The lava lake level fell slightly with the deflation, and then fluctuated between about 60 and 65 m (200–215 ft) below the rim of the Overlook crater (the floor of Halemaʻumaʻu) thereafter, the superficial changes in level caused by variations in spattering on the lake surface.

A visit to Halemaʻumaʻu yesterday to measure lava level discovered fresh spatter (scoria) scattered sparsely around the closed visitor overlook. A review of webcam imagery and seismicity found that a small explosive event occurred yesterday morning (October 19) from the lake surface out of sight below the webcams just after 1 AM. This is a reminder that potentially life-threatening explosive events are still occasionally occurring and happen without warning. USGS Hawaiian Volcano Observatory on Oct. 20 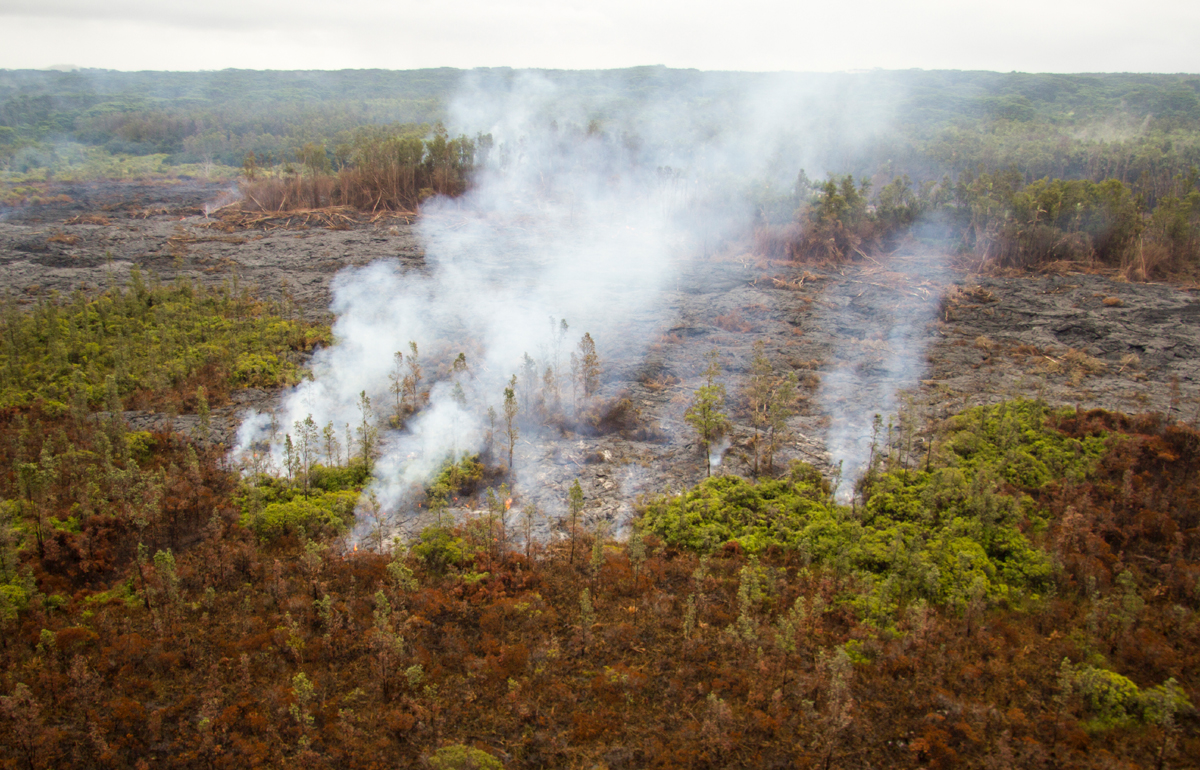 A close view of the north margin of the flow, just behind the flow front. Photo taken by USGS HVO on October 17.