Lava is 225 yards away from Pahoa Village Road

(ABOVE PHOTO) This USGS Hawaiian Volcano Observatory photo was taken just before 10 am, and shows the flow front moving through private property towards a low point on the road.

The flow continues to remain active and has advanced approximately 55 yards since this 6:30 this morning and is currently approximately 225 yards from Pāhoa Village Road. The flow front is currently moving in a northeast direction and remains on a private residential property. The flow advancement has been averaging approximately 5-10 yards per hour.

Smoke conditions continue to be light to moderate with moderate trade winds from the northeast pushing the smoke in a south southwest direction. Presently burning activity is involving a variety of materials to include tires and smoke conditions may increase in some areas. Residents down wind that may be sensitive or have respiratory problems are advised to take necessary precautions and to remain indoors. Additional health advisories may be issued depending upon materials involved with any fires associated with the lava flow.

The Pahoa Village Road between Apa’a Street and the Post Office Road will remain closed and limited to area residents only. Motorist should use caution and slow down on Highway 130 near the Post Office Road intersection. Residents of the restricted area should not bring unauthorized persons into the restricted area. In addition, Civil Defense and public safety personnel will be operating in the area round the clock to maintain close observations of flow activity. Additional updates will be broadcasted as conditions change.Hawaii County Civil Defense on Oct. 29 at 5:30 p.m. HST

Scientists of the USGS Hawaiian Volcano Observatory conducted ground and aerial observations of the June 27th lava flow on Wednesday, October 29, 2014. The flow continued to move through private property today. The leading edge of the flow was advancing about 10 m (11 yd) per hour this afternoon, but has been variable in the past 24 hours. The flow moved downslope about 125 m (136 yd) since 5 pm yesterday. The flow width was less than about 50 meters (55 yards) at the leading edge.

The lava lobe south of the main flow and upslope of Apa`a Street was not active today, but there were a couple of small breakouts on the north side of the flow that have advanced 70 to 110 m (75 to 120 yd) in the past day.

Several new breakouts were observed on the surface and margins of the June 27th flow upslope to the crack system along the East Rift Zone where the lava began flowing on the surface in early September. Pu`u `Ō`ō was obscured by clouds and thick fume during the overflight.USGS Hawaiian Volcano Observatory on Oct. 29 at 5:52 p.m. HST 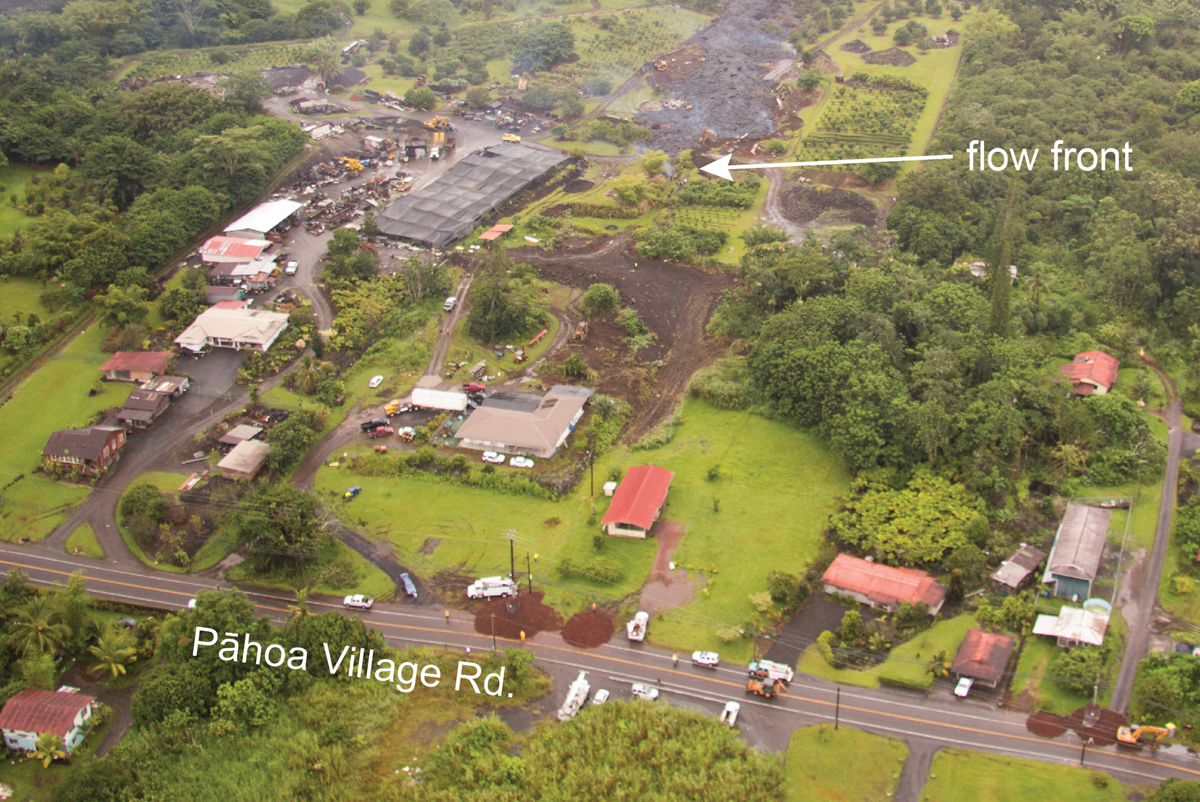 Inset taken from a USGS HVO photo shows the flow front and its proximity to Pāhoa Village Road. Photo was taken just before 10 am.