This afternoon’s assessment shows that the flow front remains active however has not advanced since Thursday. All activity along the front has been limited to breakouts along the margins or sides of the flow as well as on the flow surface. The front remains approximately 480 feet from the Pahoa Village Road. Additional breakouts upslope of the flow front are being monitored and those breakouts currently do not present with an immediate threat to area residents.

Smoke conditions were light to moderate with moderate trade winds from the northeast pushing the smoke in a south southwest direction. Smoke conditions may increase in some areas and residents down wind that may be sensitive or have respiratory problems are advised to take necessary precautions and to remain indoors.

Additional updates will be broadcasted as conditions change. We would like to thank everyone for your patience and understanding and your cooperation and assistance is greatly appreciated.

Scientists of the USGS Hawaiian Volcano Observatory conducted ground observations of the June 27th lava flow throughout the day on Monday, November 3, 2014. The leading edge of the flow has not advanced since Thursday, but active breakouts of lava were present just upslope of the stalled front.

As of 5 PM, HST, the most significant activity was a small finger of lava advancing downslope along the north edge of the private property that the flow entered last week. This lobe was about 160 meters (175 yards) behind the stalled front and was moving parallel to the main (now largely inactive) flow lobe at a rate of 10 meters (11 yards ) per hour since Monday morning. Other areas of persistent breakouts over the past few days were relatively quiet. Minor expansion of the flow field has occurred in the pasture below the Pāhoa cemetery, and there was very little activity in the vicinity of the transfer station.

The summit experienced slight inflation throughout Monday, consistent with the late stages of the most recent DI event. USGS Hawaiian Volcano Observatory on Nov. 3 at 5:32 p.m. HST 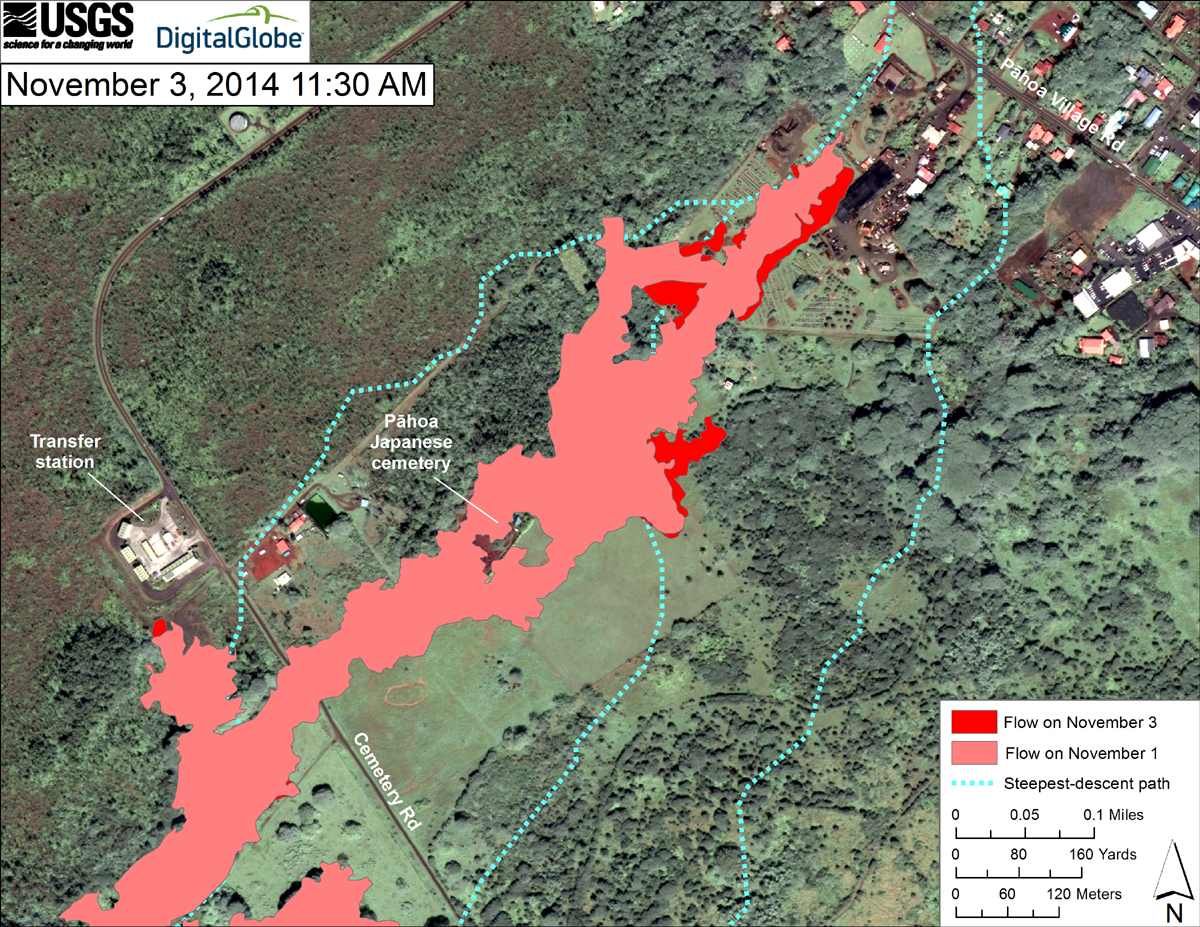 This USGS HVO map uses a satellite image acquired in March 2014 (provided by Digital Globe) as a base to show the area around the front of the June 27th lava flow. The area of the flow on November 1, 2014, at 11:00 AM is shown in pink, while widening and advancement of the flow as mapped on November 3 at 11:30 AM is shown in red. The latitude and longitude of the front of the narrow finger of lava advancing toward Pāhoa was 19.49590, -154.95256 (Decimal Degrees; WGS84). The dotted blue lines show steepest-descent paths in the area, calculated from a 1983 digital elevation model (DEM).
The flow has not advanced during the last 24 hours. At the time of mapping, the tip of the flow was stalled, but a few breakouts were active just upslope from the front.