The stalled flow front has resumed activity and has advanced approximately 15 yards since yesterday afternoon.

(ABOVE VIDEO) This morning’s Civil Defense message with video courtesy Mick Klaber, filmed on Friday Dec. 26 over the lava flow.

This morning’s assessment shows that the previously stalled flow front has resumed activity and has advanced approximately 15 yards since yesterday afternoon. The activity appears sluggish and the front remains narrow at approximately 25 yards wide. The front or leading edge remains .6 miles upslope of the Highway 130 and Pahoa Village Road intersection and approximately 700 yards from the Pahoa Market Place complex. The surface breakouts and activity along both margins continues upslope of the front however current activity does not pose an immediate threat to area communities. Civil Defense and Hawaiian Volcano Observatory personnel are maintaining close observations of the flow. Residents and businesses down slope will be kept informed of any changes in flow activity, advancement, and status.

Smoke and combined VOG conditions were moderate to heavy this morning with a light variable wind causing the smoke and VOG to settle across the entire eastern areas from Puna through Hilo. Smoke and VOG conditions may increase in some areas and individuals that may be sensitive or have respiratory problems are advised to take necessary precautions and to remain indoors.

The Railroad Avenue alternate access road remains opened to allow for motorists to become familiar with the road and traffic flow. Motorists are advised to remain on the designated route and comply with the posted speed limit. Highway 130 remains open and there is no anticipated road closure at this time. Hawaii County Civil Defense on Dec. 27 at 7:30 a.m. HST

Kīlauea Volcano continues to erupt at its summit and within its East Rift Zone. According to Civil Defense the front of the lava flow closest to Pāhoa advanced 14 m (15 yards) since yesterday afternoon. The flow continues to have surface breakouts behind the flow front as of this morning according to HVO webcams and Civil Defense.

June 27th Lava Flow Observations: Civil Defense reported this morning that the leading tip of the active flow advanced 14 m (15 yards) since yesterday afternoon and is now 640 m (0.4 miles or 700 yards) from the Pāhoa Marketplace and 960 m (0.6 miles or 1050 yards) from the intersection of Highway 130 and Pāhoa Village Road. The flow remains active behind the front in several areas.

Puʻu ʻŌʻō Observations: No significant change in ground tilt has been observed in the past 24 hours and tilt remains flat. All other monitoring data indicate no significant changes at Puʻu ʻŌʻō. The most recent measurement of sulfur dioxide emissions from the East Rift Zone was about 250 tonnes per day on December 19, 2014.

Summit Observations: Deflationary tilt began in Kīlauea’s summit at about 2:00 AM HST this morning. The summit lava lake level was measured at a depth of 50 m (164 ft) below the rim of Overlook crater yesterday morning. The summit lava lake has shown the usual fluctuations associated with changes in spattering behavior, which are also manifested as variations in tremor amplitudes and gas release. Small amounts of particulate material were carried aloft by the plume. The average emission rate of sulfur dioxide ranged between 5,500 and 7,700 tonnes/day for the week ending on December 23 USGS Hawaiian Volcano Observatory on Dec. 27 at 8:28 a.m. HST 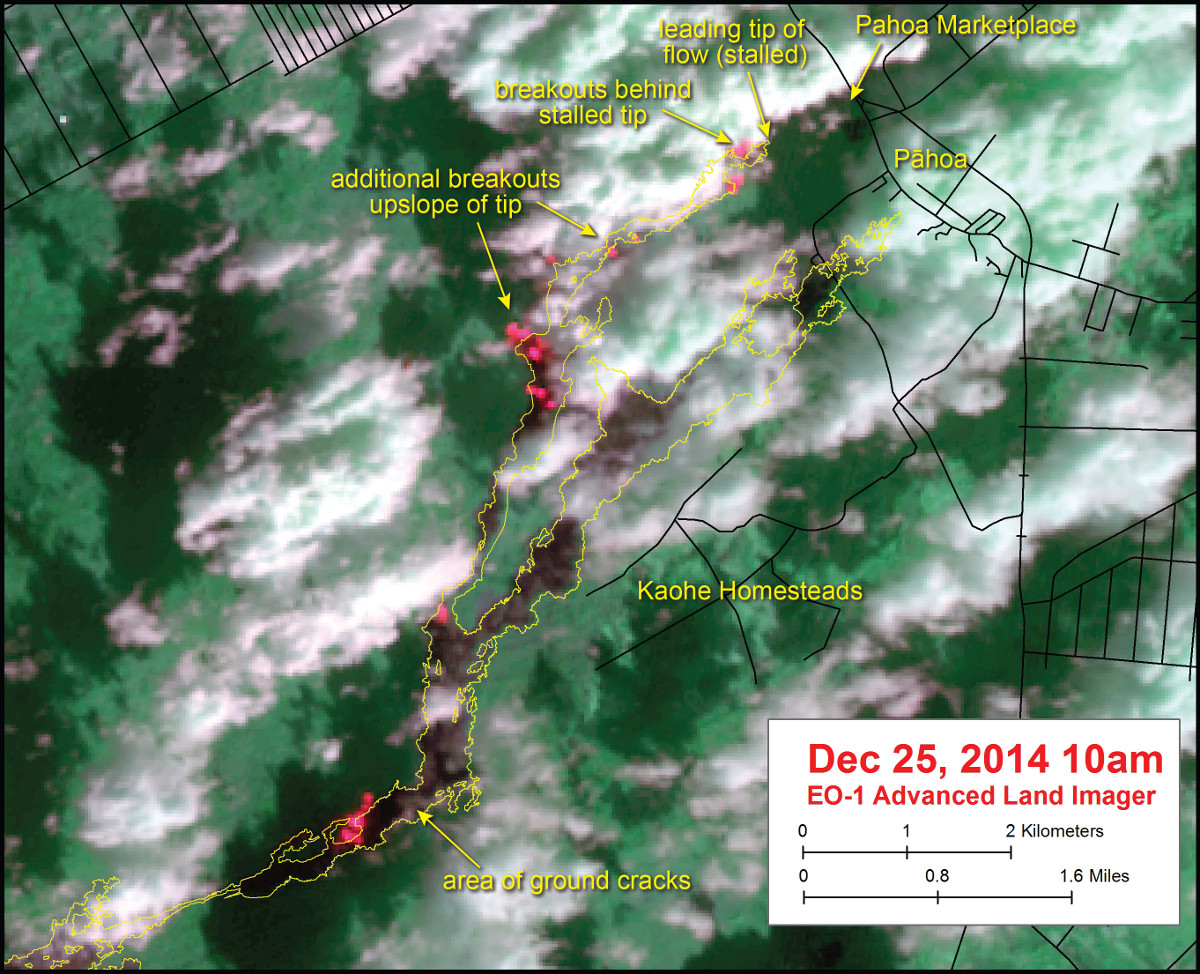 This USGS satellite image was captured on Thursday, December 25, by the Advanced Land Imager instrument onboard NASA’s Earth Observing 1 satellite. Although this is a false-color image, the color map has been chosen to mimic what the human eye would expect to see. Bright red pixels depict areas of very high temperatures and show active lava. White areas are clouds. The yellow outline is the flow margin as mapped on Monday, December 22.