The lava flow front has not advanced since yesterday, however remains active.

(ABOVE VIDEO) This morning’s Civil Defense message with video courtesy the County of Hawaii.

This morning’s assessment shows that the flow front remains active however has not advanced since yesterday. The front or leading edge remains .5 miles upslope of the Highway 130 and Pahoa Village Road intersection and approximately 660 yards from the Pahoa Market Place complex. The surface breakouts and activity along both margins continues upslope of the front however current activity does not pose an immediate threat to area communities. Civil Defense and Hawaiian Volcano Observatory personnel are maintaining close observations of the flow. Residents and businesses down slope will be kept informed of any changes in flow activity, advancement, and status. A small brush fire occurred yesterday as the active edge of the flow made contact with light brush and vegetation. The fire activity was contained within the fire break areas and no fire activity was noted this morning.

Smoke conditions were light to moderate this morning with a light variable wind. Smoke conditions may increase in some areas and individuals that may be sensitive or have respiratory problems are advised to take necessary precautions and to remain indoors.

The Railroad Avenue alternate access road remains opened to allow for motorists to become familiar with the road and traffic flow. Motorists are advised to remain on the designated route and comply with the posted speed limit. Highway 130 remains open and there is no anticipated road closure at this time.

On this final morning of 2014, Kīlauea Volcano continues to erupt at its summit and within its East Rift Zone. According to Civil Defense, this morning’s over flight showed that the front of the lava flow has not advanced since yesterday. However, surface breakouts and activity along both margins continues upslope of the front. A helicopter over flight by USGS Hawaiian Volcano Observatory (HVO) scientists yesterday afternoon also observed that the leading tip of the flow was stalled, but several small breakouts were active immediately upslope from the front. Over the last 12 hours, minor inflationary tilt was recorded at the summit, followed by a period of minor deflationary tilt this morning.

June 27th Lava Flow Observations: An HVO over flight yesterday observed that the leading tip of the June 27th lava flow was hot, but stalled around 530 m (580 yards) upslope of the Pāhoa Marketplace. The flow had traveled around 150 m (165 yards) down slope since the last HVO over flight on December 22. A very minor finger was active about 50 m (55 yards) behind the stalled tip, and several other small, sluggish breakouts were scattered along the leading 1 km (0.6 miles) of the flow. There were also several other breakouts scattered along the edges and interior of the flow between about 1.7 and 3.2 km (1-2 miles) upslope from the flow tip. The tube breakout on the upper flow field north of Pu’u Kahauale`a that started in early December, was still active. The VLF line on the upper June 27th lava tube showed no change from the previous measurement on December 22; the average cross-sectional area of the lava stream was around 2 square meters (2.4 square yards). Civil Defense reported this morning that the leading tip of the active flow has not advanced since yesterday, and that the flow front is approximately 800 m (0.5 miles or 880 yards) from the intersection of Highway 130 and Pāhoa Village Road. This morning, the flow continues to have surface breakouts behind the flow front according to HVO webcams and Civil Defense.

Puʻu ʻŌʻō Observations: Over the last 24 hours, minor inflationary tilt was recorded at Puʻu ʻŌʻō, followed by a period of minor deflationary tilt this morning. All other monitoring data indicate no significant changes at Puʻu ʻŌʻō. The most recent measurement of sulfur dioxide emissions from all East Rift Zone vents was about 250 tonnes per day on December 19, 2014.

Summit Observations: Over the last 12 hours, minor inflationary tilt was recorded at the summit, followed by a period of minor deflationary tilt this morning. The summit lava lake has shown the usual fluctuations associated with changes in spattering behavior, which are also manifested as variations in tremor amplitudes and gas release. Small amounts of particulate material were carried aloft by the plume. At around 10 pm yesterday, a small piece of the ledge surrounding the lava lake collapsed, producing a small LP seismic signal and disturbing the lake for several minutes. The average emission rate of sulfur dioxide ranged between 5,500 and 7,700 tonnes/day for the week ending on December 23.USGS Hawaiian Volcano Observatory on Nov. 27 at 8:44 p.m. HST 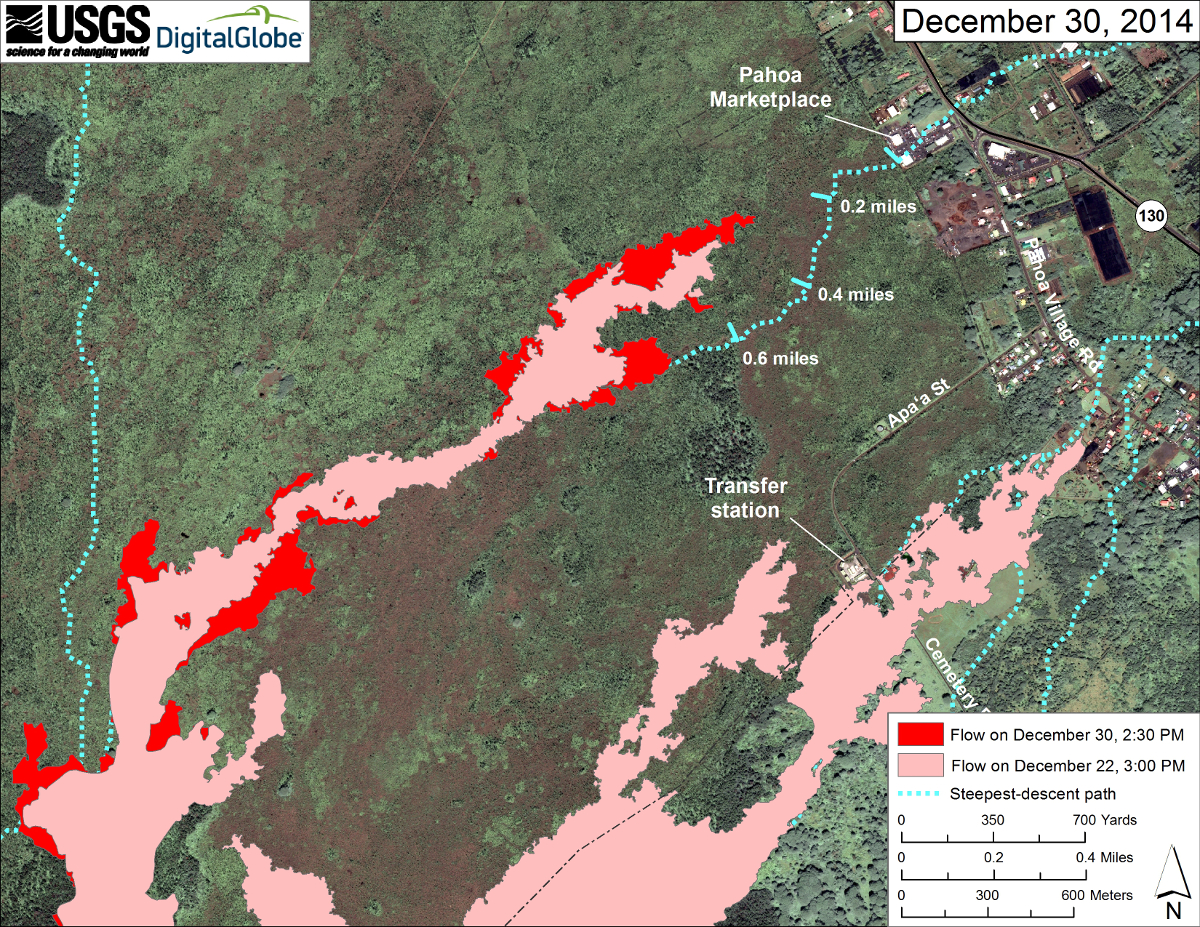 This large-scale USGS map uses a satellite image acquired in March 2014 (provided by Digital Globe) as a base to show the area around the front of Kīlauea’s active East Rift Zone lava flow. The area of the flow on December 22 at 3:00 PM is shown in pink, while widening and advancement of the flow as mapped on December 30 at 2:30 PM is shown in red.
The downslope tip of the flow was stalled about 530 m (580 yards) upslope from the Pahoa Marketplace at 19.498695 , -154.969467 (Decimal Degrees ), but weak activity was present about 50 m (55 yards) behind the front. Other small breakouts were sparsely scattered across the flow up to about 3 km (2 miles) upslope from the stalled tip (and others even farther upslope), but most of the activity was concentrated along the leading 1 km (0.6 miles) of the flow. This differs from the previous few weeks and is not an increase in activity near the flow front, but rather a decrease in activity farther upslope. 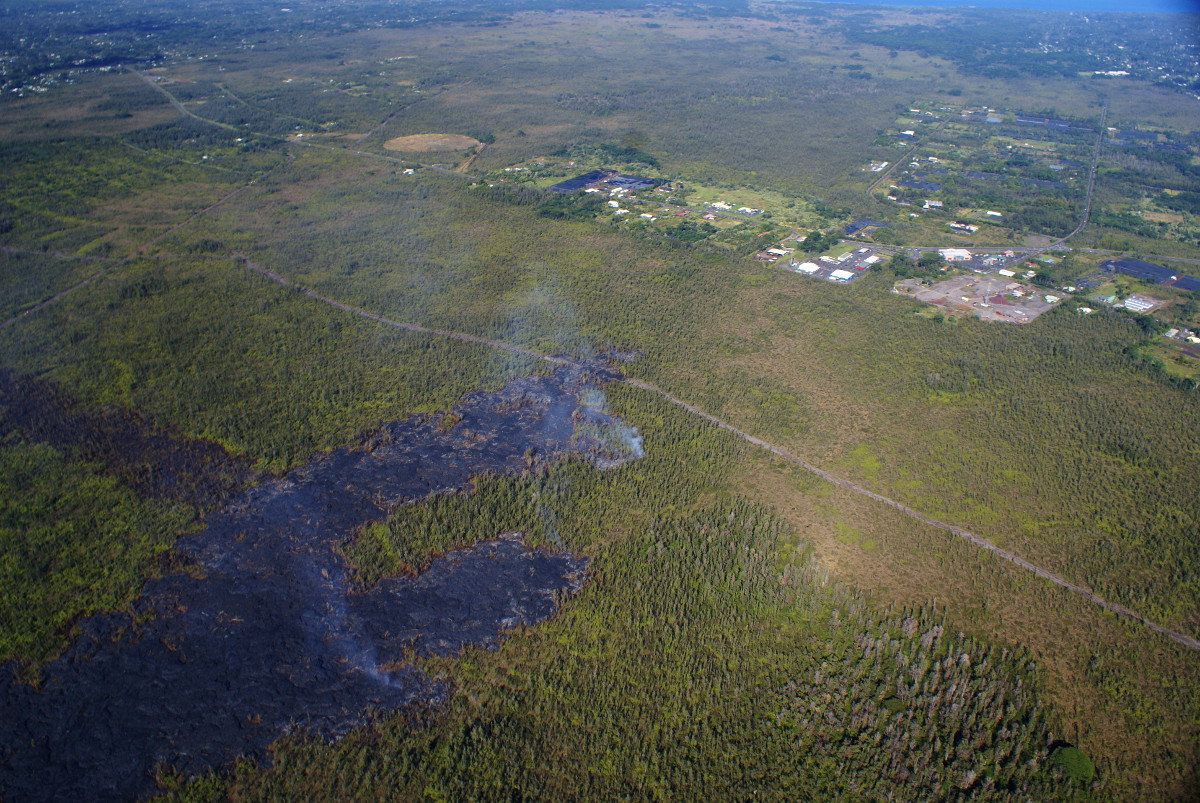