PUNA, Hawaii – The front of the June 27 lava flow has not advanced for days, and on Thursday USGS Hawaiian Volcano Observatory scientists conducted a helicopter overflight to map the perimeter of the flow.

“At the time of the flight,” scientists wrote in an update issued at 7:24 p.m. Thursday night, “the leading tips of the two active lobes to the north and the east were inactive, but several small breakouts across the interior and edges of the lobes were active. The eastern lobe, formerly headed toward the Pahoa Fire station, remained stalled at its leading tip but continued to host small breakouts behind the front scattered 550-1,100 m (600-1,200 yds) upslope from highway 130. The northern lobe was inactive beyond where it branched off from the more easterly lobe. Additional breakouts were observed in the areas just upslope and downslope of the True/Mid-Pacific well pad about 7.5 to 9 km (4.7 to 5.6 mi) from the lowermost lobe tip.”

There has not been very much activity at the distal tip of the lava flow front this week, but observers caution that the flow is not cold. 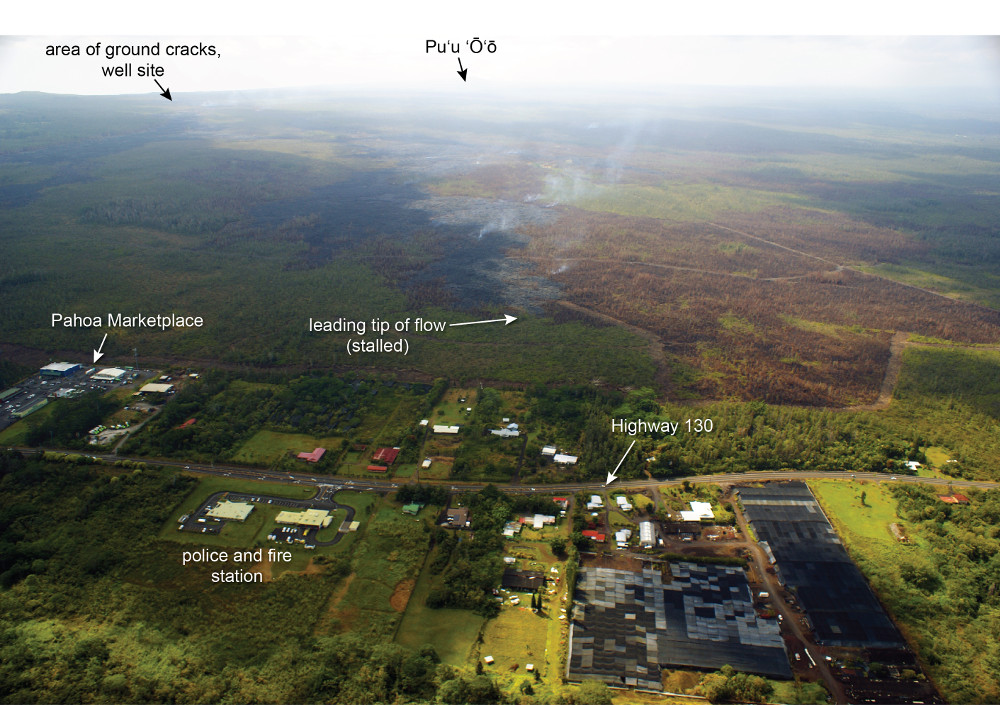 “Although the leading tip of the flow remains stalled roughly 500 meters (550 yards) upslope of Highway 130,” wrote USGS HVO in a caption for the labelled image below, “active breakouts persist a short distance upslope of the stalled tip. These active breakouts are evident as small smoke plumes on the flow margin, where lava is burning vegetation.” 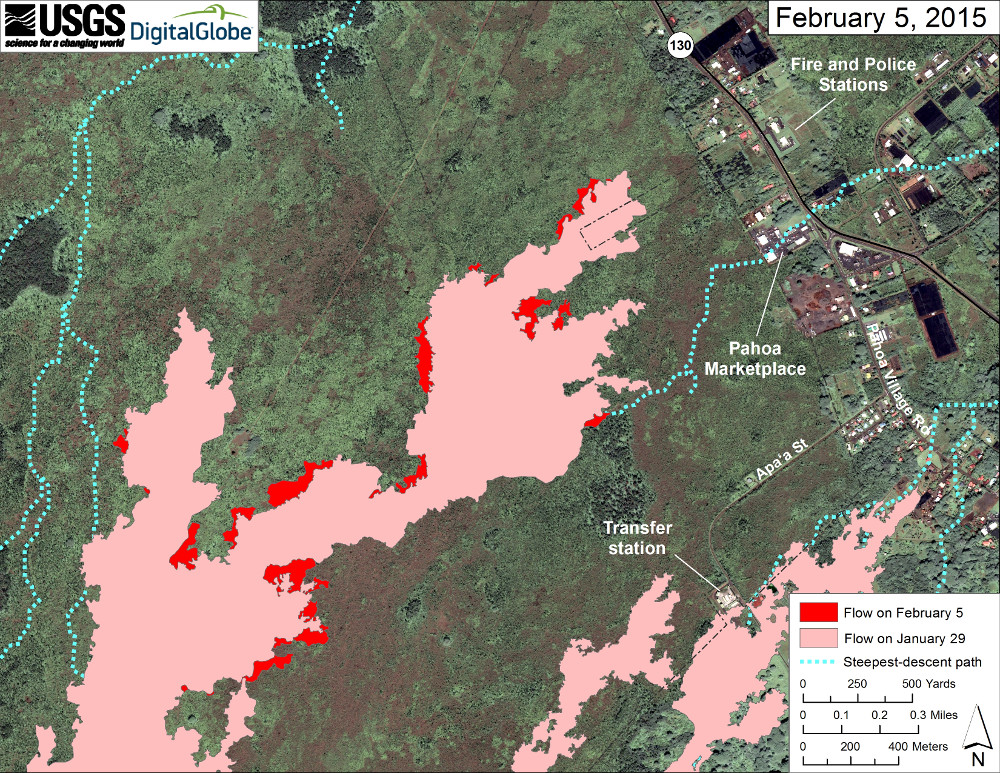 A small-scale map of Kīlauea’s East Rift Zone lava flow shows activity far upslope that may be of significance. 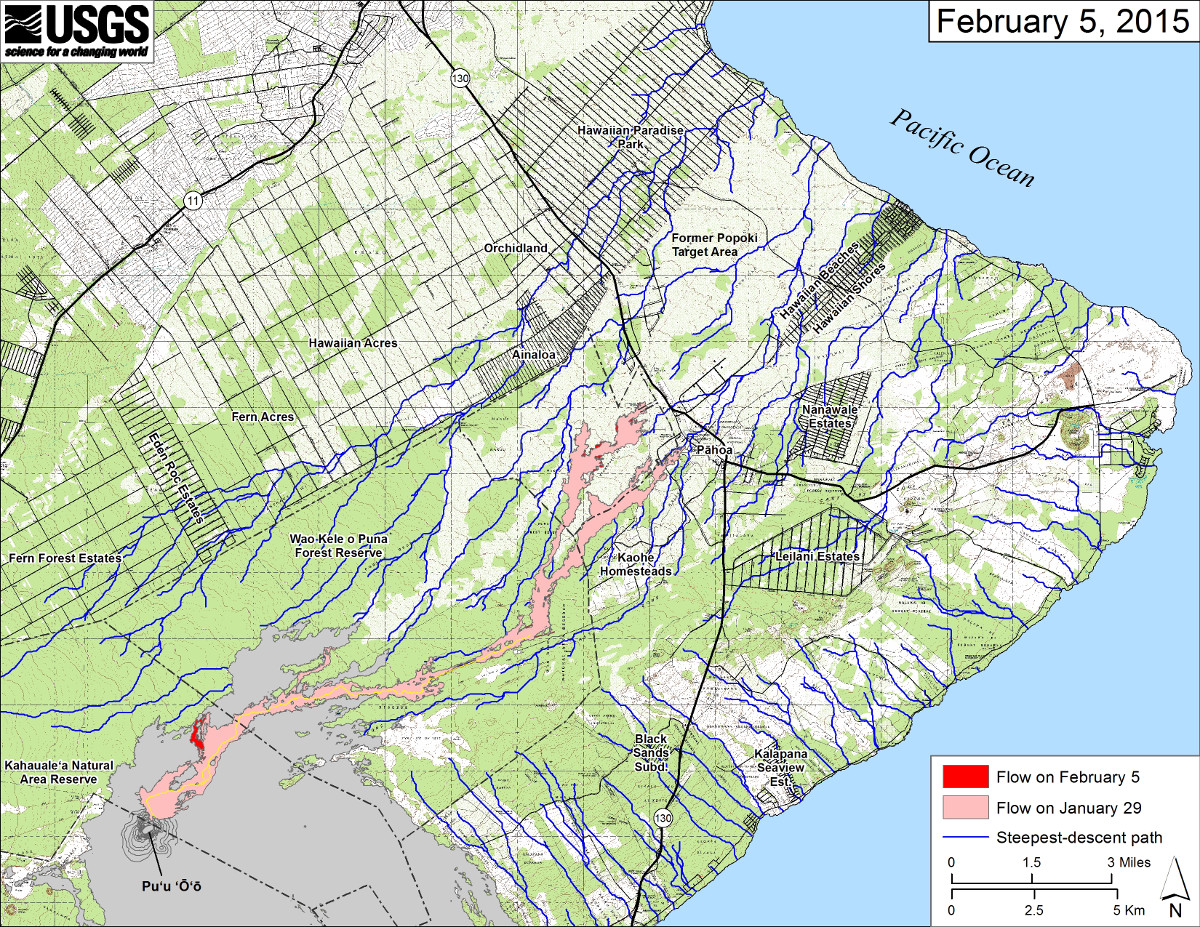 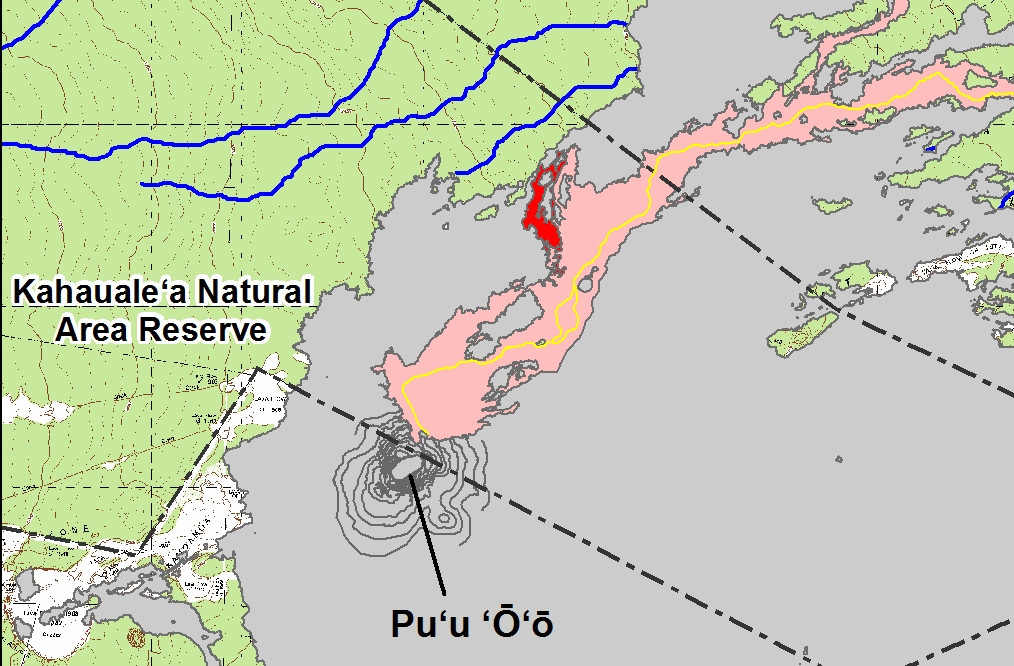 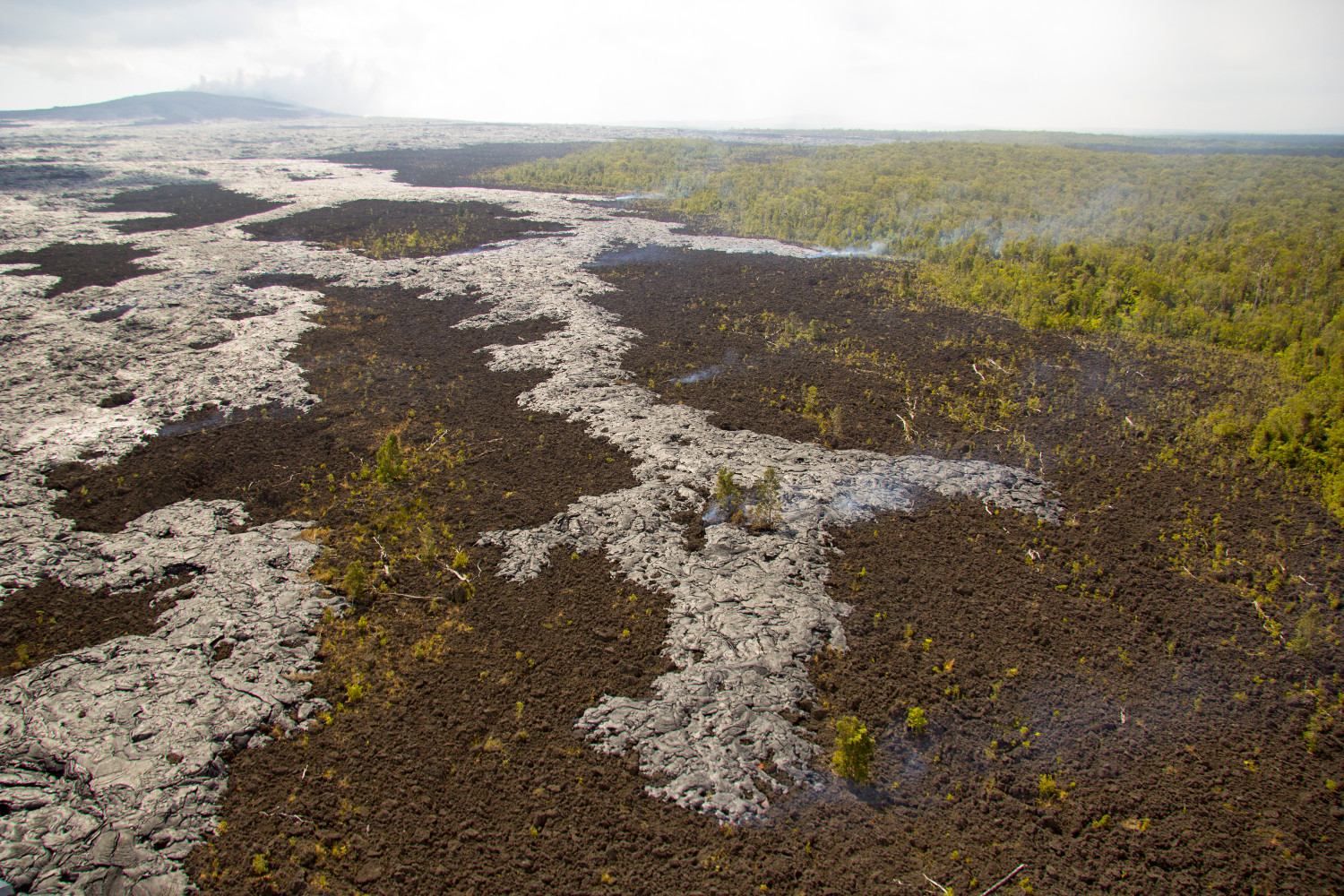 Wide view of the breakout 2 miles from Pu’u O’o, by USGS HVO.

During a media conference call on Thursday, scientist Steve Brantley said the breakout 2.2 miles northeast of Puʻu ʻŌʻō may be accounting for the decrease in lava reaching the distal tips of the flow.

Scientists further described how a breakout like the one to the northeast of Pu’u O’o can heavily influence activity at the flow front. This is from the February 5 Volcano Watch article, just issued by USGS Hawaiian Volcano Observatory:

Much of the active lava on the surface, what we call “breakouts,” is focused around the farthest portion of the flow—near, but not always at, the flow front. The lava gets from the vent to this distal part of the flow via a subsurface lava tube. For much of the length of the flow field, this lava tube is a single “master” tube, perhaps a few meters (yards) wide. The June 27th lava flow is about 23 km (14 miles) long, but this master tube appears to reach no farther than about 20 km (12 miles). Over the final 3 km (2 miles) of the flow length, the lava moves beneath the surface via a complicated network of minor lava tubes. The master tube can be thought of as an artery that branches out into small capillaries (minor tubes). This network of minor tubes is what supplies lava to the surface breakouts near the flow front.

When the rate of lava supply from the vent is high, lava moves efficiently through the network of minor tubes, feeding vigorous surface breakouts that reach the flow front. In this case, the flow front advances downslope. But when the lava supply rate is low, the lava on the surface and within the system of minor tubes may cool to the point of solidifying and stalling, and active lava may not be able to reach the flow front. In this scenario, the flow front stalls, but weak breakouts can nevertheless persist a short distance upslope, closer to the end of the master tube.

It is this second scenario—a lower lava supply and stalling flow front—that appears to have been in play over much of January. If people only hear that the flow front has stalled, they might get the false impression that the flow as a whole is inactive. But scattered breakouts have persisted upslope of the stalled flow front for weeks now. from Feb. 5th USGS Hawaiian Volcano Observatory Volcano Watch