HAWAII ISLAND – Both sides in the Mauna Kea 31 court case are considering ho’oponopono – the traditional Hawaiian process of reconciliation – as an alternative to trial. Another round of court appearances took place in Waimea on Thursday, June 18th, as part of the legal process following the arrest of 31 people on Mauna […]

HAWAII ISLAND – Both sides in the Mauna Kea 31 court case are considering ho’oponopono – the traditional Hawaiian process of reconciliation – as an alternative to trial.

Another round of court appearances took place in Waimea on Thursday, June 18th, as part of the legal process following the arrest of 31 people on Mauna Kea on April 2 in connection with the blockade of the Thirty Meter Telescope project. The group – who now refer to themselves as the Koakuamauna of the Mauna Kea ʻOhana in media releases- appeared first in Hilo court, and later in Waimea. Criminal trespass charges for ten of the arrestees were dismissed nolle prosequi without prejudice by the Hawaii County prosecutors office in May, although those charges could be refiled.

In the days prior to their second Waimea court appearance, word began to spread that some of the Koakuamauna were going to push for ho’oponopono.

“Many other protectors and their attorneys have filed motions, among them motions to dismiss for lack of subject-matter jurisdiction, as well as several requesting the court to consider Hoʻoponopono, to include all parties involved with the wrongful arrests, as a culturally and morally appropriate alternative to proceeding to trial. We deeply appreciate the prosecutors interest and consideration in Ho‘oponopono, a traditional Hawaiian process to make things right, as even they recognize that a guilty or not guilty verdict will not get to the heart of this issue.” – Koakuamauna on June 18, 2015

The Koakuamauna say that on May 28, arrestees Jim Albertini, Ronald Fujiyoshi and Gary Oamilda filed a written motion to “request the court for Ho’oponopono with all parties involved with the arrests as an alternative to proceeding to trial.” The motion was supported by both the prosecutors office as well as Judge Barbara Takase.

During Thursday’s Waimea court appearance, Judge Takase offered the 21 of the Mauna Kea 31 who are still facing charges “the option to waive their right to a speedy trial and partake in Hoʻoponopono outside of the courts” according to the koakuamauna. “All but two Koakuamauna, who chose instead to continue straight to trial, agreed to the process.”

The group issued their second media release in as many days.

“The Koakuamauna, AKA the Maunakea 31, call upon and invite the following individuals, who represent their respected parties, to participate in Hoʻoponopono: David Ige-Governor of the state of Hawaiʻi, Kekoa Kaluhiwa-Deputy Director of DLNR, David Lassner-President of the University of Hawaiʻi, Donald Strainey-Chancellor at UH Hilo, Stephanie Nagata of the Office of Mauna Kea Management, and Henry Yang-Chairman of TMT International Observatory, LLC.

Hoʻoponopono is a traditional Hawaiian process defined by Mary Kawena Pūkuʻi as, “setting to right; to make right; to correct, to restore and maintain good relationships…The specific family conference in which relationships were ‘set right’ through prayer, discussion, confession, repentance, and mutual restitution and forgiveness.”

In order to preserve the integrity of Hoʻoponopono and remain true to its intent and purpose, the Koakuamauna call for a complete halt to any further attempt by the TMT to resume construction upon sacred Mauna a Wākea until the complete process of Hoʻoponopono can be thoroughly vetted or either side decides that a Hoʻoponopono is unachievable.

“Hoʻoponopono is not a process of mediation or any type of negotiation. It is an honest and strict process and attempt of making right what is wrong,” says Kahoʻokahi Kanuha. It is a “committed process that requires knowledgeable and disciplined cultural practitioners to fairly preside over it,” added fellow protector Lākea Trask.”

Trask believes that even the courts recognize that a guilty or not guilty verdict would not get to the heart of the issue between the protectors and the TMT. “It is our sincere hope that all parties involved will see the value in Ho‘oponopono and make the concerted effort to resolve this issue in the most culturally and morally appropriate way.” – Koakuamauna on June 18, 2015

Hawaii County Prosecuting Attorney Mitch Roth was interviewed by Sherry Bracken on Thursday about the unusual consideration. His comments are contained in the video above.

Parties involved have until August 6 to file with the courts the parameters of the proposed Hoʻoponopono, Koakuamauna reports. Trials have been delayed until December 3rd. 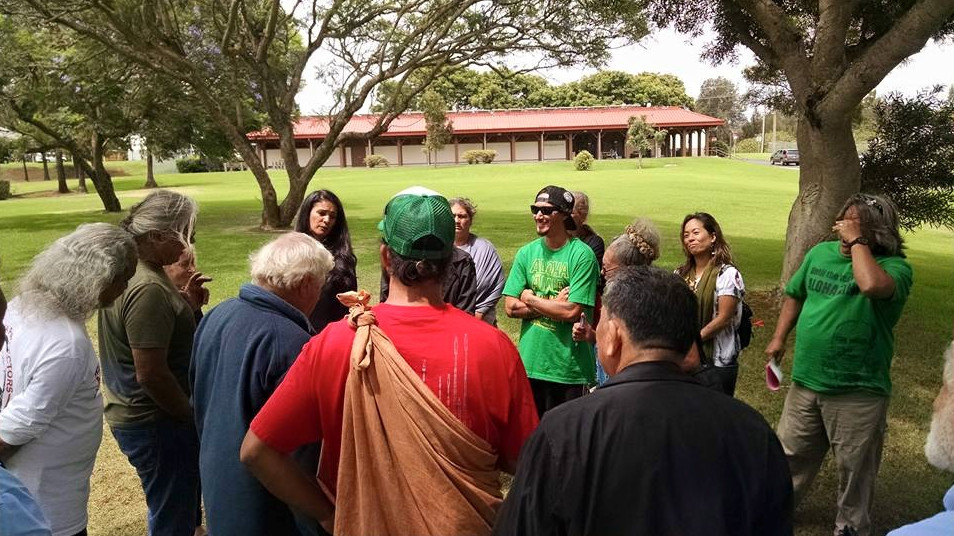 Outside the Waimea courthouse on Thursday, June 18th. Photo by Nanci Munroe.