MAUNA KEA, Hawaii – Both sides are gearing up for the next skirmish in the Thirty Meter Telescope conflict. On Saturday, TMT partners agreed to restart construction of the $1.4 billion observatory planned for the summit area of Mauna Kea. Henry Yang, Chair of the TMT International Observatory Board, issued this statement: “After more than […] 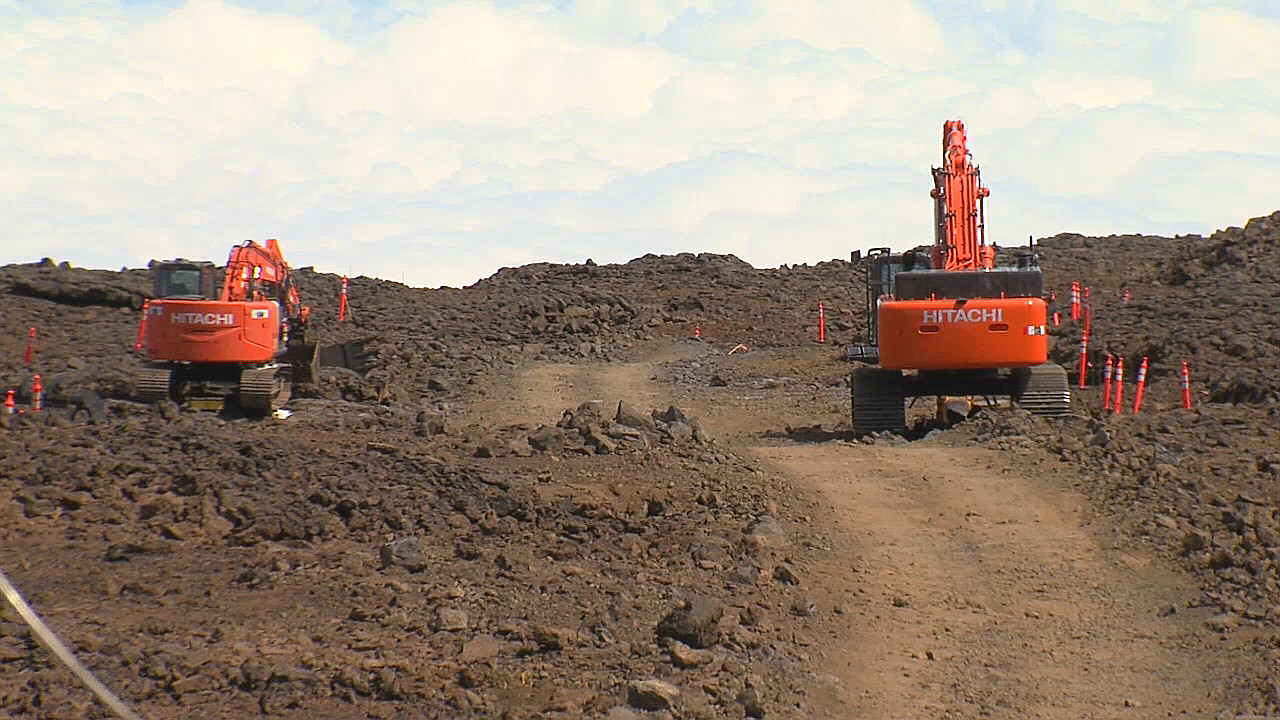 The TMT construction site on the northern plateau of the Mauna Kea summit area.

MAUNA KEA, Hawaii – Both sides are gearing up for the next skirmish in the Thirty Meter Telescope conflict.

On Saturday, TMT partners agreed to restart construction of the $1.4 billion observatory planned for the summit area of Mauna Kea. Henry Yang, Chair of the TMT International Observatory Board, issued this statement:

“After more than two months of consultation, education, and dialogue with many stakeholders, we humbly announce that the TMT International Observatory Board has decided to move ahead to restart the construction of the Thirty Meter Telescope on the morning of Wednesday, June 24. Our period of inactivity has made us a better organization in the long run. We are now comfortable that we can be better stewards and better neighbors during our temporary and limited use of this precious land, which will allow us to explore the heavens and broaden the boundaries of science in the interest of humanity.” – Henry Yang on June 20, 2015

Construction of the telescope has been at a stand still since late March, when opponents of the project began blocking the Mauna Kea Access Road to TMT crews. The situation gained worldwide attention following the arrest of 31 individuals, the Koakuamauna, and sparked a statewide movement to protect the mountain from further development. A petition containing over 50,000 signatures opposed to the TMT was delivered to the governor. The Office of Hawaiian Affairs voted to withdraw their support of the project. Demonstrations were held across the islands and at various state universities. But the display has not changed the mind of the TMT International Observatory Board.

“We look forward to a positive relationship with all Hawaiians, while we understand that the majority of Hawaii’s people are supporting the TMT project. We deeply respect and are mindful of those who have concerns, and yet, we hope they will permit us to proceed with this important task while reserving their right to peaceful protest.” – Henry Yang on June 20, 2015

During the delay, idle construction vehicles began leaking oil at the site, catching the attention of TMT opponents. Part of Yang’s statement addressed the issue.

“As done at any construction site, we plan to first investigate and assess any possible oil leakage and ensure we can provide proper maintenance of machines and equipment so they operate safely and correctly – in order to protect Maunakea and preserve the sensitive environment. We will then begin to repair and install fencing in the interest of public safety.” – Henry Yang on June 20, 2015

The construction site has also been the location of a tense exchanges between TMT security and Koakuamauna. After Kahookahi Kanuha was given written notice of trespass at the site, he returned the next day to deliver his own notice of trespass to security guards. Since that back and forth, security personnel on the summit told us they would not be issuing anymore notices. Yang seems to back up the policy in his latest statement.

“As we proceed, TMT is open and willing to allow cultural practitioners in the area of the construction site to continue customary and traditional practices. Allowing this practice to continue to occur will require further dialogue and mutual agreement to work out the details in order to establish a cooperative and harmonious environment for all parties.” – Henry Yang on June 20, 2015

Yang ended his statement in reverence to the host culture:

“In an effort to be sensitive to and observant of the Native Hawaiian host culture, we will deepen our knowledge of the cultural, ecological, and spiritual aspects of the mountain and continue to learn how to better respect and appreciate Maunakea’s important cultural areas. On behalf of TMT, I want to express our sincere appreciation to the people in Hawaii for their understanding and support.” – Henry Yang on June 20, 2015

The news prompted immediate response from leaders in the Ku Kia’i Mauna movement. Idle No More Mauna Kea put out a call to action on Facebook:

Despite the ongoing protest of the TMT by people in Hawaii and worldwide, the international board that oversees the project will continue desecrating Mauna a Wakea on Wednesday, June 24. By proceeding with the project the TMT officials neglect to acknowledge and act on the concerns of citizens of Hawai’i who have voiced their strong disapproval of the project. This action further demonstrates the lack of respect that the State of Hawai’i and project officials have for Native Hawaiians and their culture, in addition to, the health and well-being of the people and the environment.

Members of the global Mauna Kea ‘Ohana are asked to lift prayers, songs, and chants for our mauna and those who will be standing physically on the mauna. Those who are on island and plan to be on the mauna Wednesday morning are asked to bring their highest selves to protect the mauna and stand with compassion, patience, love, and forgiveness in their hearts. Bring digital cameras, phones, and video cameras to the mauna to document the day as it unfolds. Community members are asked to wear clothing and regalia demonstrating respect for the sacredness of our mauna.” – Idle No More Mauna Kea on June 21, 2015