HAWAII: Ignacio is a Category Four hurricane, with maximum sustained winds at 140 mph. Some additional strengthening is still possible today before a weakening trend begins. 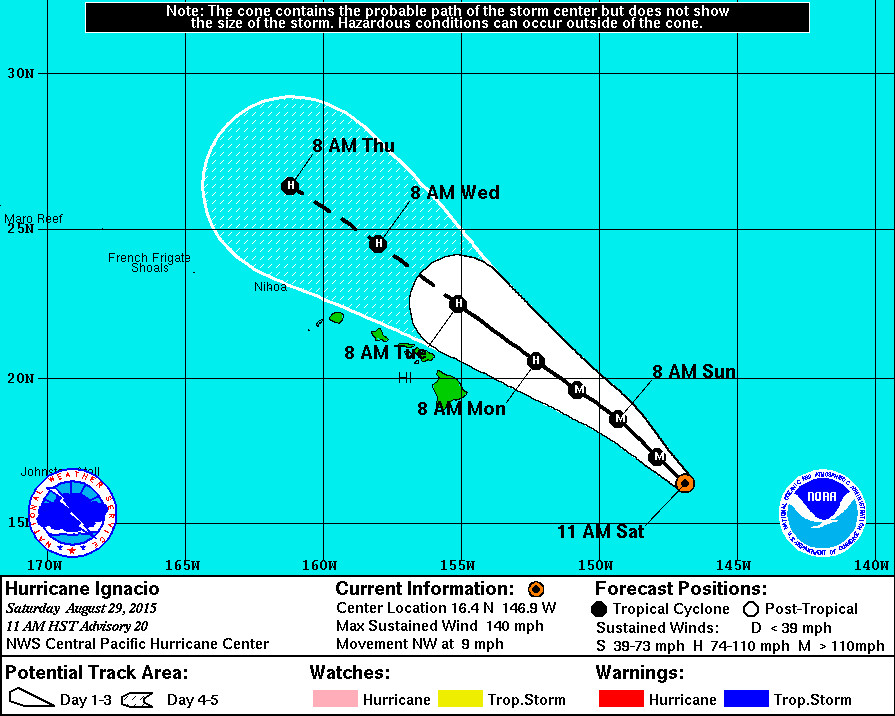 The Coast Guard Captain of the Port has moved the ports of Hilo and Kawaihae to Condition Whiskey (IV): The ALERT condition in which winds above 34 knots (39 mph) are expected within 72 hours. The projected arrival of storm force winds could facilitate the need to close commercial ports throughout the main Hawaiian Islands due to severe weather.

The Hawaii Emergency Management Agency has cancelled the monthly test of the statewide outdoor siren warning system scheduled for Tuesday, September 1, 2015 in order to avoid confusion as Hurricane Ignacio moves by the Hawaiian Islands.

Tests of outdoor sirens and the Emergency Alert System are conducted simultaneously, normally on the first working day of the month, in cooperation with Hawaii’s broadcasting industry. The next regularly schedule monthly test will be on Thursday, October 1, 2015, at 11:45 a.m.

Ignacio has a very impressive satellite presentation this morning with a 20 nm warm… Clear eye. The reconnaissance aircraft found 133 kt flight level winds in the northeast quadrant of Ignacio… With sfmr winds peaking at 121 kt. Based on this information the advisory intensity has been set to 120 kt… The second category four hurricane in the central Pacific Basin of 2015… And the third major hurricane for the year. The wind radii have been adjusted once again to fit the new aircraft data.

The hurricane is moving toward the northwest… 315 degrees… At 8 knots. Our forecast philosophy has not changed… As Ignacio continues to move steadily northwest toward a break in the mid-level ridge. This motion is expected to continue for the next couple of days and the track guidance is tightly clustered around this idea. Later in the forecast period… Beyond day 3… Some of the guidance shows a slight bend toward the west as the system begins to encounter shear from the subtropical jet as well as a weak upper level trough over the main Hawaiian Islands. Our forecast is slightly to the right of the previous forecast and close to the consensus guidance through 72 hours owing to the initial more northward motion… And slightly to the left of the previous forecast at days 4 and 5.

Ignacio is currently at the northern edge of an area of weak shear underneath an upper level ridge. Sea surface temperatures along the forecast track from nasa-sport are 27-28c. The hurricane has a very small window to intensify further today… But as it continues northwest it will begin encountering upper level westerlies that will start to induce weakening. Our forecast stays close to the ships guidance through the next 24 hours… Then shows weakening at a slightly more gradual trend than ships through the rest of the forecast period. It is possible that Ignacio could weaken faster beyond 48 hours if the strong shear depicted in the global models materializes.