HAWAII: Hurricane Jimena is gradually weakening and moving slowly northwestward far east of Hawaii, yet its uncertain forecast into next week is keeping officials on alert. 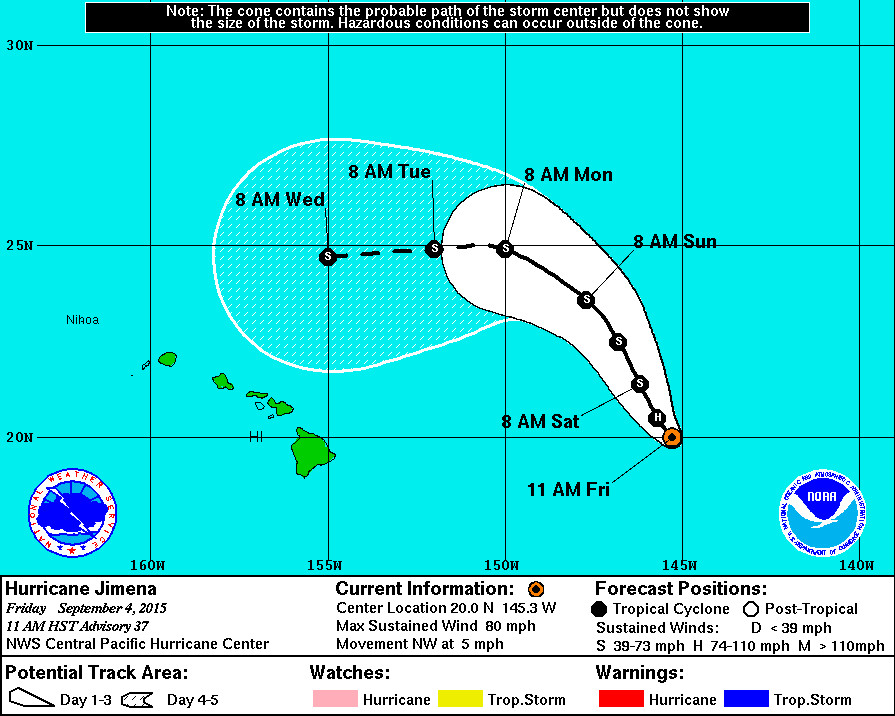 HAWAII – Hurricane Jimena is gradually weakening and moving slowly northwestward far east of Hawaii, yet its uncertain forecast into next week is keeping officials on alert.

Jimena is currently a Category One hurricane, with winds near 80 mph. The storm is 635 miles east of Hilo and moving northwest at a slow 5 mph. Slow weakening is expected to continue over the next couple of days, and Jimena is expected to increase in forward motion and shift toward the north-northwest on Saturday and Sunday.

After that, things become less certain. According to the National Weather Service, the guidance “diverges significantly on days four and five.”

“The official forecast has been nudged slightly southward,” forecasters said at 11 p.m. HST, “with an increase in forward speed on days four and five in anticipation of a building upper level ridge producing northwesterly flow aloft and a weaker Jimena becoming increasingly steered by the low level ridge to the north.”

No watches or warnings have been issued for Jimena at this time, and Hawaii County Civil Defense is including updates on the storm in its daily radio messages. Hawaii Island remains under a Flash Flood Watch and High Surf Warning. “Due to ongoing unstable weather conditions localized heavy rains and possible thunder showers can be expected,” civil defense said this morning. “Motorists are advised to drive with caution and to be prepared for hazardous conditions to include ponding and run off and to anticipate traffic delays.”

“The High Surf Warning for the east facing shores of Hawaii Island remains in effect and has been extended through 6 p.m. tomorrow,” civil defense reported. “Dangerous surf conditions continue to be observed and reported across areas of East Hawaii. Surf heights of 12-18 feet are forecast for the east facing shores of Hawaii Island. Residents along the coast and in low lying areas are advised to take necessary precautions. Beachgoers swimmers and surfers are advised to exercise caution and to heed all advice given by Ocean Safety Officials. All beaches and roadways are open at this time.”